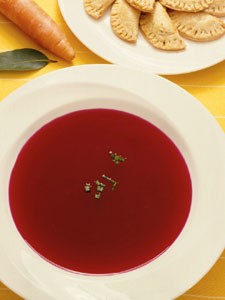 Soup Is Good Food: Weekly soup klatches nourish the body and the soul.

Girls’ night takes on a whole new meaning with soup

In mid-October of last year, two of my closest friends had an idea. As they were examining a Syrah sample for bacteria, or whatever it is they do all day in that big lab at that giant winery, Rebecca said to Grace, “Hey, we should have a weekly soup night. You know, invite a bunch of people, take turns making the soup, that sort of thing. It would get us out of the house all winter. Maybe we should have it be a girls’ night.”

Grace, who’s been the idea-instigator since the three of us were 15 years old and our culinary prowess solely consisted of carving frozen chunks from the wild boar her brothers had shot in Bennett Valley, called me and informed me I would be hosting the first soup night.

“It will be great, don’t worry!” she coaxed. “I’ll bring all the stuff over. We invited some girls from work, you should invite some girls too, have ’em bring wine or whatever. If we do it every week, that’s one less dinner each of us has to cook!”

Et voilà–soup night was born. Seven girls trooped into my tiny apartment bearing armloads of salad fixings, bread and cheese to partake of Grace’s homemade chicken noodle soup and my wine cellar (closet, really). Very few of us had met each other prior to the inaugural soup night. Grace, Rebecca and I each simply invited a few friends who we thought might be hip to the idea of a weekly communal dinner. That core group of soup girls has since become what we look forward to every Monday night.

Because winter is so often the time when we hunker down with the sweetie, cat, work and Netflix subscription, the weekly soup excursions are often the only time many of us make it out of the house in the cold or the rain. The e-mail chain leading up to soup night thrives; through perky mass e-mails with subject headers like “Soup-o-Rama!” we decide who’s going to host the next round and what kind of soup she’s going to make, and we look out for new jobs when one of us gets canned from the factory or the office. We’re there for each other, through soup.

Many of these are women I never see outside of our weekly soup meetings, but we’re girls–we know how to pack in quality time over a quick glass of wine, salad and bread and cheese, soup and sometimes dessert. We’re in by 6pm out by 9–we’ve all got to work in the morning, except for my roommate, who is unemployed and plowing through Anna Karenina at an astonishing pace.

There’s the usual job and man talk, of course, but why I like soup night is because it’s so much smarter than that. The soup group is composed of a pack of intelligent food lovers who are sharp as tacks, like to cook, but sometimes don’t because it’s too much of a bother to cook for just one or maybe two.

Like so many other women of our generation, we are simply trying to figure out what the heck we are supposed to be doing in this life. On a recent night we talked about the xiphoid process (the lower part of the sternum), and a pop-art painting of a bald man led to a discussion of the life of Fidel Castro and why everyone wears those shirts with a lino-cut picture of Che Guevara on it. Would Che have approved of his image on hipsters’ lunchbox-purses? We don’t think so.

We talk about training (about half of us are competitive athletes) and if we’re really doing what we are supposed to be doing. I think our mothers would have called our gatherings “consciousness raising,” but we belong to the generation of feminists who want to be empowered and have the door opened for us on a date. In short, soup night is nourishment for the belly and the brain, the place where we know we’re in the company of like minds who know there really is a difference between Slovakia and the Czech Republic, between cilantro and coriander.

This soup was a wonderful recent addition to a foul Monday night, using the best of the last of the winter pears.

Cut squash in half and scoop out seeds. Place flesh-side down in a microwavable dish with a little bit of water, cover with plastic wrap and microwave for 15 minutes. Let cool. Peel and cut squash into cubes when done (you should have about 4 cups). Sauté bacon in a large stockpot until crisp; remove from pan, drain on paper towels and crumble. Remove all but 1 tbsp. bacon grease from pot; add onion and sauté until browned. Add squash, pears, celery and broth to pot. Bring to a boil; reduce heat and simmer, covered, for 30 minutes. Let cool slightly and either mash or purée until slightly chunky or smooth. Return to pot and add herbs and bacon. Simmer for 10 minutes more. Stir in half-and-half. Ladle into bowls and sprinkle with fresh thyme. Makes eight 1-cup servings.