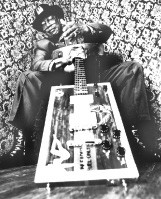 Sound of Things to Come

Enough with backward-glancing assessments and persnickety rankings of the albums, songs, bands and events of 2006! What about 2007, a year saturated with promise? Its potential is palpable; its slate, clean. True, there’s a bit of hopeful wishing in what follows, but a little positive thinking never hurt anyone.

This year, the famed South by Southwest music fest will exceed all expectations by offering five bands for every one patron. The influential indie-music site Pitchfork will go one entire week without championing an adorable Scandinavian pop band. For the first time in 10 years, the British music press will not overhype a debut album by a band of cheeky 19-year-old lads.

Surprising no one, the Smiths will become the only beloved band of the 1980s that does not reunite. Morrissey, however, will shock legions of fans by re-declaring his celibacy.

Michael Jackson will set records one again when his album of all-new material sells only one copy, making him simultaneously the world’s bestselling and worst-selling artist. The sole CD will be accidentally purchased by a profoundly farsighted Wisconsin woman who mistakes it for a Mahalia Jackson album. In a misguided attempt to save face, Jackson will generate even more bad press by donating the 900,000 unsold CDs to starving child refugees in the Congo. It will be pointed out that none of them owns CD players.

Realizing that it’s best to quit while she’s ahead, Madonna will take an extended break from recording music, choosing instead to devote herself to her family by delegating tasks to her five nannies and hiring a sixth. Britney Spears will irrevocably damage her vocal chords with her excessive partying, and the world will breathe a collective sigh of relief. During an appearance on Larry King Live, Ms. Spears will make a racist comment about Jacko’s Congo CD donation debacle, though no one will be able to hear her since she has no voice. The reputations of Ms. Spears and Mr. Jackson will neither suffer nor improve because of this event.

Joanna Newsom’s follow-up to the colossally perplexing Ys will be relatively normal, surprising many but disappointing none. When asked about it in interviews, Newsome will say, “You really didn’t expect me to pull that shit off twice, did you?”

Reviews of Scarlett Johannson’s album of Tom Waits cover tunes will focus on how sort of bearable it is, but nevertheless stress that there’s not much of a reason to buy it. Meanwhile, Tom Waits’ Scarlett Johannson tribute (in drag) will debut in Berlin and become the toast of the town.

Kraut!, the big-budget Broadway musical revue featuring favorites by the seminal art-prog-rock band Can, will flop miserably. The off-off Broadway debut of Scumdogs of the Universe, however, a revue of GWAR songs starring GWAR themselves, will be a runaway success. Still reeling from the poor reception of Lestat, Elton John will cease writing lyrics for stale Disney movies, effectively bringing on his retirement.

A whole bunch of thirty-something white people will attend the Jan. 21 KRS-One show at the Last Day Saloon for nostalgia. Tainted Love will perform shows at the Mystic Theatre no less than 55 times. Everyone will go out and see live music at least once a week, causing Netflix to go out of business.

Sometime this March, the average American will be able to walk into a major grocery store chain or fast food restaurant without having to hear Kelly Clarkson’s “Since U Been Gone” or Gnarls Barkley’s “Crazy.” A huge error in corporate judgment will cause Starbucks to release a CD by Mac Dre, thus exposing Middle America to hyphy slang.

After years of putting up with my pestering, Dad will finally break down and let me take his old Johnny Cash, Hank Ballard and Bo Diddley records. The cancelled sea chantey sing-along that I tried to go to in December will be rescheduled. I will attend, it will be awesome and sea chantey sing-alongs will sweep the nation. For the first time since 1995, Mr. Bir Toujour will go a through two-hour period without air-drumming once. During this short pause, he will be receptive to my hints that I want a functioning record player for my birthday. When I receive it, I will celebrate by playing Bo Diddley Is a Lover at top volume, and all will be right with the world.