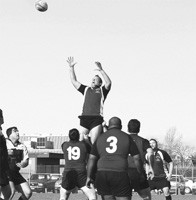 The little-known blood and beer sport of local rugby

‘God, he’s sure bleedin’ a lot,” one fan says to another as they leave For Pete’s Sake Field on a recent chilly Saturday afternoon in Santa Rosa.

The field glistens in the sun, which has begun to break through the clouds, and highlights the 30 players on the field. The pitch resembles a soccer field and the game being played is much like soccer. Near the sideline there is a crowd and some commotion as the game continues. A player sits on the grass with gauze over his eye, which he takes off to reveal a gash that is bleeding profusely. No surprise there.

After all, this is rugby.

In rugby, play is never really stopped, so at all times there is offense in the form of eight forwards, who incorporate carrying the ball, kicking, passing, kick-passing and grounding the ball over the opponents try-line (end zone) as the main way to score. Defense is also crucial at all times. The seven backs, or players in backfield behind the forwards, make up the defensive part of the team, using tackling as their main strategy.

Playing against the Redding traveling team, the Santa Rosa Rugby Club shares club status with other Bay Area teams such as the Marin Reds, Krewe Rugby and the Bay Area Rugby Club. Established over 20 years ago, these clubs are composed of men from the ages of 17 to 58. There are about 25 to 30 men on a team; 15 play at any given time.

These rugby players are not simply weekend warriors. Most teams practice at least twice a week, with games on the weekends, and center their career and family lives around the team January through May.

Separated by only 40 feet, the two teams tearing up the grass at For Pete’s Sake Field share a sideline where the emotion is intense but honorable. Watching Redding and Santa Rosa battle it out is Lynn Meister, a local youth rugby promoter and coach who is a cofounder of the local high school rugby programs founded during the early 1990s to supply the Santa Rosa men’s club team with talented young prospects.

With rugby growing in popularity around Bay Area high schools, the Elsie Allen High School rugby team is an outstanding example of the pool of talent from which the club draws. Having won the 2005 California state championship, Elsie Allen’s rugby team was one of the most successful North Bay youth sports teams in any field in recent years.

Pat Farley, president and captain of the Marin Reds for the past three years, is another promoter of youth rugby. There’s a sort of rugby royalty in his family that pushes him forward. Farley’s grandfather started the Pacific Coast Rugby League, the league in which the Santa Rosa and Marin clubs both play, his father started Marin’s local high school team and now he is himself forming a youth rugby league.

The diversity of the teams crosses trivial local boundaries and is at times international. In fact, the teams have and do consist of some Australians and New Zealanders.

“If a player from one of the islands is coming through the Bay Area, the local clubs will give them a place to play,” Meister says.

Farley also says that his club will pick up overseas players looking for a team. “We’ve had players from Fiji, Wales, Ireland, Australia and England. A lot of times, they are coming into town for something like a job offer and are looking to play rugby with the same sort of social aspect that they are used to back home. They see that in the smaller towns; the rugby is central, sort of like a Friday night lights for them back home.”

Overseas, rugby is sometimes a nation’s main sport, as with New Zealand. When rugby became a professionally recognized sport in 1995, more and more countries have a growing number of rugby faithful.

Despite the thrill most of these men find in making their opponents bleed, everyone says that the social aspect of the game is what sets it apart from other sports. These seem like straight-shooting, hard-working men. The kind of men you might see in a Chevy commercial or a beer ad. The kind of men who have families. And indeed, the families of the players all seem to be in attendance, young children playing in the grass alongside their fathers; wives and girlfriends looking on from their seats on blankets, most sharing beers and cheers and general good spirits among each other.

Jon Muchow, president and coach of the Rose, downplays concerns that rugby is too rough a sport.

“Studies have been done, and it’s been shown that there are fewer injuries in rugby then in sports like football,” Muchow says. “More technique is needed [in rugby than football], which in turn causes you to be better protected. The techniques used allow you to play and protect yourself without [pads]. If I have a helmet on, I can tackle your knee and possibly hurt you, but if I try and tackle you in the knee without a helmet on, I’ll probably break my head.”

With a fraternity-like atmosphere, rugby traditions are strong, and there is none greater than the party thrown for the visiting team by the home team. And there is no law in the tradition more important to the camaraderie of the game as the drinking of beer.

Yes, beer. The most social of drinks for the most social of sports, beer and rugby seem to fit neatly together. It’s an amusing scene near the end of the game, as half the players are on the side-line for good. Most looking disheveled and some going shirtless, the New Castles they held were like amber beacons letting everyone know that they had played a well-fought game and were done for the day.