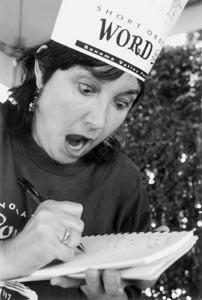 Fast food for the soul: Wordsmith Donna Nassar Noyes warms up for the Short Order Poetry event on Aug. 17 at the Sonoma Valley Poetry Festival.

JOHN WARD has a story to tell, and it’s suddenly clear that he can’t wait any longer. He leans forward in his chair and smiles broadly across the table: “Let me tell you why I was late,” he says. “I had to go sign some loan papers for a car. Somehow, it came out that the loan agent, the person who was having me sign the papers, was a poet . . .Then I find out that she’s coming to the festival to read.”

Seated beside him, her gray-green eyes sparkling, Suzanne daRosa lets out a laugh.

“I think that’s one of the most joyful things about what we do,” she says. “Everywhere you go, you find out that somebody has written a poem in their life or that they love to read other people’s work.”

That might seem an unlikely sentiment in a world where poetry is often considered an endangered species. Despite the growing popularity of poetry slams, or the occasional pop culture flirtations with the art form in such movies as Henry Fool, the question remains: How many people really care about poetry? The answer, according to the two folks at this table, is many more than you might think, even if that passion is a well-kept secret.

For four summers now, with an interruptory pause last year, daRosa, 48, and Ward, 55, along with a large group of collaborators, have worked to fan those scattered embers into a raging bonfire of verse. The two are co-founders of the Sonoma Valley Poetry Festival, an annual two-week celebration that stages quirky, playful events in the byways of Sonoma to popularize the art form and draw local poets out of the woodwork. Almost incidentally, to hear daRosa tell it, the event has also attracted such notables as poet laureate Robert Pinsky.

The event–which this year runs from Aug. 6 to Aug. 21–began in 1995 as part of a nationwide contest to bring acclaimed television journalist and author Bill Moyers to town. In stiff competition with festivals in such places as New York, and with a mere five weeks to pull the whole thing together, the organizers of the Sonoma Festival found that their effort ignited intense excitement in the community.

“After it was over, we knew we’d done something special,” Ward recalls. “In our minds, we’d already won.”

The judges agreed, and Moyers helped celebrate the win by appearing at an event that drew thousands of people. For a time, the eyes of the poetry world were glued to Sonoma. And, apparently, that allure is slow to fade.

“People outside the community still relate to it that way,” Ward says. “They still say, ‘Oh, you mean the festival that Bill Moyers came to?'”

“The event that made Bill Moyers famous–that’s what we call it,” says daRosa with a chuckle.

They won, daRosa says, largely because of broad-based community participation. In that first year, organizers went all out to inject a healthy dose of poetry into everyday life. There were poets reading at the gas pumps. There were poems stuffed into grocery bags. There were poems read at board meetings and in churches. And people turned out in droves for the grand finale: a huge poetry reading in the Sonoma Plaza that featured noted poets reading from the main stage while other folks read from the many soapboxes scattered across the plaza.

“Person after person would get up on a soapbox to read, and then more people would get their courage up,” daRosa says. “To this day, people still come up to me and say, ‘That was the first time I ever read in public.'”

The event, called Poets on the Plaza, will be repeated this year on Aug. 21. (To get time on the soapbox yourself, show up at 3 p.m.) This time, however, among other changes, the readings from the better-known poets on the main stage will be shorter.

That change and several others sprang from the fact that organizers took last year off to think about other tasks. In part, that hiatus occurred because some of the key organizers were busy with other projects. But it also happened, according to daRosa, because no one wanted to settle into a pattern.

“It felt like it wasn’t fresh any longer to me, and other people felt the same, so I thought I’d just take a year off and see what happens.” daRosa says. “We didn’t want this to turn into something that would be a formula.”

“We’re trying to be out there, pushing the extremes, trying the unusual,” Ward says.

“Of course, then we found we weren’t so extreme when Chris left that message on our answering machine,” daRosa replies with a laugh.

SHE’S REFERRING to a practical joke played on the festival by a man who called up to accuse Sonoma of being a “white, insular community” and ask when the inner-city rap poets would be allowed to perform. It may have been a joke, but it also seems to have touched a nerve among the organizers, who say they especially regret not having greater participation from the Mexican-American community.

“It turned out it was one of our people on the board who was just giving us a hard time,” daRosa says. “But it made us realize that we are really insular. . . . It’s a concern that I hear a lot of people talking about, even just in the greater community. How do you break down the barriers?”

Another important concern for daRosa and Ward is keeping the event free of excessive commercialization. There are no huge corporate sponsors, and the small profit made every year goes to the organizers’ favorite charity, California Poets in the Schools.

Many of the festival participants, including daRosa and another local poet named Arthur Dawson, participate in CPITS in Sonoma Valley schools. According to Ward, the effects of the program have been astonishing.

“When Arthur Dawson walks down the street, kids run up to him,” he says. “That totally knocked me out when I first saw it. They run over to him like he was a sports coach . . . He’s engaged them in a way that makes poetry totally accessible.”

It’s that effect–poetry’s ability to make an impact on human lives–that keeps the festival organizers coming back for more. When asked to explain why the art form continues to wield its peculiar power, daRosa pauses a moment, searching for the right words.

“We don’t listen to each other very well in this culture, I don’t think,” she says finally. “But people respect poetry. They listen to it. I think it gives you a way to communicate what you have to say, a way to really be heard.”

The Sonoma Valley Poetry Festival runs from Friday, Aug. 6, to Saturday, Aug. 21, at various locations in Sonoma. The festival concludes with Poets on the Plaza on Aug. 21 from 3:30 to 9 p.m. in front of the Sonoma City Hall. For details, pick up a schedule at the Sonoma Regional Library, or call 935-POET.