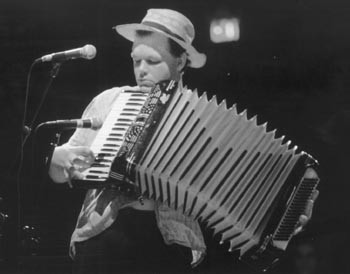 HOW MANY in the audience think Gabe wrote that last song?” asked David Fichera, lead singer of Los Blockheads. About three people raised their hands, while the rest of crowd of 120 or so sat quietly in their seats, knowing full well that band member Gabe Meline, who sang and played piano for the piece, had just sung the vintage Elvis Costello tune “Welcome to the Working Week,” the only cover Los Blockheads played during their bubbly set.

The popular 5-year-old local musical outfit–once voted Best Punk Band by Independent readers–was making its farewell appearance before band members break up to depart for college. The July 24 show was held at an unusual location–the Sonoma County Repertory Theatre–and the cozy venue made it easy to take in the nuanced delights offered by the acoustic-based quartet, particularly Los Blockhead’s unique instrumentation, which includes trumpets, accordion, keyboards, and upright bass.

But more important, the downtown Santa Rosa venue–which for the past five years has served as home base for one of the county’s best-regarded theater companies–is apparently developing into a haven for local bands in a cultural landscape almost devoid of nightclubs.

In these days of bigger-is-better rock festivals, it’s refreshing to find someone willing to work to support the local music scene. Doug Jayne, co-owner of the Last Record Store and founder of Jackalope Records, is that person.

The music series at SCRT, which is open to all ages and offers performances by local bands ranging from the likes of Los Blockheads to jazz band Larry Basket every weekend through the end of August, is Jayne’s brainchild, born out of his desire to give a leg up to local musicians.

A resident of Sonoma County since 1979, Jayne knows the local music scene well. Part of his motivation for engineering the shows is the lack of small venues in the area.

“This series is geared as a challenge for the performer to do more of a concert. When you’re playing at a bar, maybe people aren’t really paying as much attention,” he says. “Here everybody is looking at you, so when you tell your story, everybody is listening.”

The intimate room is up-close and personal–in part because it’s set up in-the-round–and has a capacity of just 168 people.

“The biggest thing about giving local acts support is that there are venues like Luther Burbank Center and many wineries that you would expect to see more locals opening at, but it seems that the attitude of those venues is that if I give one local act a break, then they’ll all be bugging me,” he offers. “My hope is in giving smaller bands an opportunity to play in front of a small audience it might help elevate them, at least for the evening.”

Unlike some local nightclubs, Jayne also pays the performers–which is pretty elevating in itself.

THE SERIES arose out of Jayne’s involvement with SCRT. He had already been doing sound effects for SCRT’s theatrical productions, and the idea for the local music series came when his friend John Moran, SCRT’s in-house playwright, mentioned that Jayne should get something in return for his services. The theater generally is vacant during July and August because SCRT is busy presenting its Shakespeare in the Park series in Sebastopol, so Jayne started exploring the notion with a couple of test shows.

The result: the local music showcase and hopes for a regular summer series in the future. Those hopes may bear fruit if the series draws the kind of audience that attended the July 24 show.

In addition to Los Blockheads, the event featured San Francisco punk icon Dr. Frank and a young local band called the Reliables. While the first couple of shows–which featured such acts as Karry Walker and Marc McLay and the Dustdevils–had a modest turnout, Saturday’s bands played to a nearly packed house made up of a very youthful and enthusiastic audience.

Up first were the Reliables, who chuckled through their quirky set with pluck. In such a casual setting, the audience was forgiving of any false starts.

Los Blockheads–playing in Los Lo-Fi, as they put it–took full advantage of the theater’s in-the-round setting, with Fichera rotating to sing to each portion of the audience. Their set was filled with fun, frolic, and plenty of boy-wants-girl subject matter.

Dr. Frank, leader of the internationally acclaimed Mr. T Experience, was the evening’s finale, and was enthusiastically received. Exhibiting his trademark knack for wordsmithing, Dr. Frank’s lyrics pull you in to meander around his often silly world. Case in point: the songs “Every Time You Go away You Take a Little Piece of Meat with You” and “Even Hitler Had a Girlfriend,”

Los Blockheads won’t be back anytime soon, but the SCRT series continues with other offerings, ranging from jazz to alternative country to folk rock, including an Aug. 21 performance by Van Morrison’s keyboardist John Allair. Above all, Jayne says he wants the events, which are geared to those who enjoy an intimate setting for live music, to offer a good time to local music fans.

“If at the end of the night people are smiling and slapping each other on the back when they leave,” concludes Jayne, “then it’s successful.”