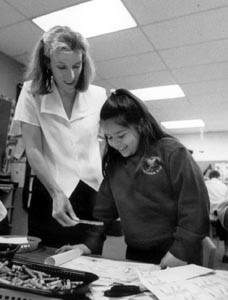 Sonoma County charter schools are a bold experiment in education

WHEN THE UNASSUMING double doors of Sonoma Charter School first swung open, back in the fall of 1993, the event was viewed by local bureaucrats and education watchdogs as the start of a worthy, if controversial, experiment. As one of California’s first charter schools–created as an alternative to a public school system that, according to charter-school advocates, has become inefficient, outdated, and unbending–everyone involved knew that this ambitious K-8 school out on Sonoma Highway would be the focus of much public scrutiny.

To an extremely focused and determined core of parents and educators, however–most of whose students would be attending the brand-new school–that first day of classes was more than just Day One of some educational “experiment.”

To them, it was nothing short of a dream come true.

“I’m constantly blown away by the things these parents have accomplished,” enthuses Roger Frost, principal of Sonoma Charter School, now officially the oldest operating charter school in the county. Aside from all the pre-legislation letter-writing and petition signing, Frost mentions fundraising efforts, school-wide painting parties, rotating volunteers for lawn-cutting and landscaping, and daily food service.

Parents even sit in when new teachers are being interviewed.

Though it may have been the passage of the 1992 California Charter Schools Act that made charter schools legally possible, it is the parents and teachers that made it happen to begin with. And it’s those same parents and teachers that continue to make things happen, as California’s charter-school program enters its sixth year. “The big majority of charter schools are founded by families that are seriously seeking a different educational option,” Frost says, “a program they can have some control over. Charter-school parents tend to be very involved.”

Indeed. Seven years after the charter-school bill passed, with nearly 200 such schools now up-and-running in the state (including 10 in Sonoma County alone, with two new ones opening doors this fall), it is clear that a high level of parent-teacher involvement is pretty much typical of the ever-growing charter-school movement.

Not that there is any such thing as a “typical charter school.”

“The whole theory behind charter schools is to generate new and innovative techniques and models of learning,” explains Colin Miller of the California Department of Education. As examples, he cites “back-to-basics” charter schools, arts-based schools that combine academic studies with emphasis on performance and fine art, and bilingual immersion schools. There are charter schools that include religious teachings, schools that take place outdoors or in museums, schools that combine classroom learning with large amounts of homeschooling, and schools that aim to help at-risk children or those with various learning blocks or substance-abuse issues (Marin County’s Sobriety High School, for instance, offers a curriculum involving 12-step meetings and routine urine tests).

AT A CROWDED luncheon in June, Ray Carlson–head of the board of directors for the award-winning, non-profit Kid Street Theater, in Santa Rosa–stood up before a packed room of supporters to announce that the innovative arts-therapy program had won approval for charter-school status. After several years of operating as an after-school and summertime program for at-risk children, the highly successful program has become Sonoma County’s newest charter school.

According to Carlson, it’s not a moment too soon.

“So far, most charter schools have served an upper-middle-class segment of the population,” explains Rose Haynes, Kid Street’s charter-school administrator, pointing out that the new school, which officially opens Aug. 30, will serve a distinctly less advantaged group of children: homeless kids, those in shelters, children who’ve seen severe abuse. “Most of the kids who will be coming to us literally don’t know how to learn,” she says. “The circumstances of their lives have been focused purely on survival, not learning. Our goal at Kid Street Charter School is to create a loving and caring environment so that our students can become learners.”

On the other hand, a charter school can help save existing school programs threatened by changing social and political tides. Ginger Dale is the principal of Cali Calmecac, an award-winning bilingual immersion school, grades K-8, that was a Windsor district public school until last year, when it transformed into a charter school to avoid being shut down by the anti-bilingual Unz initiative. Now that Cali Calmecac has been chartered, Dale has seen a dramatic increase in interest from parents outside the Windsor school district.

“A lot of parents evidently want their kids to be bilingual,” she says. The change, she says, has been a positive one. “Now that we’re a charter school, there’s a sense among the parents and teachers that everyone has more say in school matters–and everyone’s excited by that. We haven’t made any big changes yet, but there’s a sense of great potential, as everyone is looking at what we want from our school in the future.”

But the future of the charter system is uncertain. While parents rave about this newfound sense of participation in their children’s education, politicians concerned with such issues know that there’s more to an effective education than having happy parents. At some point, academic standards have to come into play.

“Charter schools still need to prove themselves as an effective alternative to public schools,” insists Assemblywoman Virginia Strom-Martin, D-Duncans Mills, a former elementary school teacher. “For now, the jury is still out.”

She admits that charter schools are certainly popular–to accommodate this popularity, the state Assembly has just passed legislation that will allow up to 100 new charter schools per year. But she is far from convinced that they are any better, academically, than public schools.

A recent state report, while inconclusive, found no evidence that the charter schools are academically superior to their traditional counterparts. “I basically think charter schools are fine,” continues Strom-Martin. “But I’m concerned that charter schools might be seen as some magical educational panacea. People see charters as the only alternative to problems within the public school system, but we can still do a lot of creative things within the existing structure. Teachers in public schools are not as ‘hamstrung’ as charter-school advocates believe.”

UNFORTUNATELY, the very diversity and academic range of charter schools that make them so appealing also make them difficult to evaluate, and make their performance nearly impossible to compare to that of public schools. Academically, it’s an apples-and-oranges situation. As Miller points out, “Not all charter schools are going for academic excellence. If a school is designed to serve low-performing students, then their tests will show that they are performing below standard–but does that mean the school is unsuccessful? The students might, in fact, be improving. Those types of things are hard to gauge by test results.”

Assemblywoman Kerry Mazzoni, D-Novato, agrees that some would prefer the charter-school experiment to fail. “I think some charter schools are doing a good job, and some aren’t living up to the expectations their local communities had for them,” she says. “There are people who feel that charters are threatening the existence of public schools. But I’m not one of them. And the majority of the Legislature believes that charter schools are here to stay. What we want to have happen now is for those schools to work.”

Most charter-school fans, however, believe they already are working, and that what they need is to be left alone. The last thing they want is any well-meaning legislative tinkering. “After all,” says Roger Frost, “one small step can ruin something beautiful.”