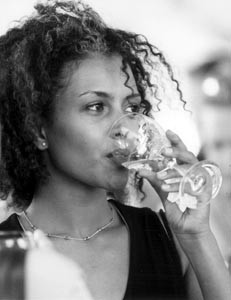 Food tourism is fueling an economic boom in Sonoma County. The pot is boiling

Typically for Sonoma County, working pickups will park next to luxury sedans, dusty cowboy boots will stroll alongside Italian loafers, faded denims will brush up against imported silks, and the locally grown will share opinions with the nationally known. All these things will happen casually and comfortably because the participants share a common passion . . . fine wine, fine food, good company, and an appreciation of the people who make them happen.

–from the Sonoma County Wine and Food Showcase program

WELCOME TO Disneyland–Sonoma style. The aforementioned program notes are beautiful, even laudable, sentiments, but a look around the prestigious showcase event on opening night revealed a serious gap between fantasy and fact. Namely, there weren’t many jeans among the several hundred ticket holders, some of whom had paid $650 per person for a five-day events package. And by far the “working”est-looking car in the lot was a little dented Honda Civic hatchback belonging to yours truly.

It’s a peculiar paradox of marketing Sonoma County’s food scene to outsiders: the dirt (the dusty boots, if you will) is needed to keep our claim to country legitimate, but high-end events and packages are needed to bring in the dough. Bridging the gap will take more than a poetic passage in a program.

Of course, when the bottom line is looking good and getting better, who wants to mess with it? “Eating and drinking” accounts for 16 percent of the almost $650 million that visitors to the county spent in 1995, the most recent year for which there are figures. What with recent write-ups in such prestigious publications as Fine Cooking, Food and Wine, and the New York Times, Sonoma County’s food and wine industry is attracting an increasingly higher class of tourists and spawning pricey package tours. Take the one that HMS Travel has arranged this October for the editors and 120 readers of Fine Cooking magazine. Billed as a California Experience, the three-day tour sold out in 42 days, at a per-person cost of $1,100 to $1,300, not including airfare.

“A room at the Hilton sells for $100 a night–we’re selling that [space] for almost $420 a night, because we wrap it around culinary education opportunities and affiliate it with Fine Cooking,” says HMS owner Larry Martin, whose company has specialized in nationwide food and wine group tourism since 1981.

These visitors probably spend more than the average visitor’s daily expenditure of $135; they’re coming out here expressly to experience a heightened awareness of food and wine, so they’ll be buying lots to take back home. And they’re here longer, so they’ll spend more overall. Finally, they’re adding to the take of the all-important transit occupancy tax, the tax on overnight stays that are collected and parceled out to city and county tourism boards for marketing and support services, plus arts and community events that benefit local residents. In 1998, the T.O.T. collected countywide totaled over $9 million.

Tours such as the Fine Cooking trip fall into the category that the travel industry calls “enrichment travel,” and baby boomers are leading the charge, says Martin. “We’ve already done the beach trip. We’ve sat on our butts. We’re bored. Now we want to go on an archeological dig in Africa or help people build houses in Appalachia.”

Throw in the national trend toward heightened culinary awareness, and you get field trips to organic farms and an evening of wine with Robert Mondavi.

EVEN THE MOST luxurious overnight trip to Sonoma County is predicated on a decidedly low-budget industry: farming and small-scale food production. It’s always been a staple of the county’s economy, and the image of the farmer in the dell remains a draw for the county’s 4.5 million visitors each year, especially daytrippers from the greater Bay Area.

Farm Trails is largely responsible for cultivating this reputation. It pioneered farm networking in 1973, and has grown to include more than 87 full members. While the basic idea hasn’t changed much over the years, both the visitors and the farmers have, says Jayne Burns, Farm Trails’ administrative assistant. “People want to be supportive of farms, and at the same time they have a really fast lifestyle,” she observes. “Everything we do has to be a little more action-packed–you know, packaged for people.”

There are those farmers who resist the packaging, such as Shepherd Bliss of Kokopelli Farm. Bliss, a well-known organic berry farmer, has no e-mail or website, but boasts 400 customers on a mailing list, and receives visits from others who see his handmade signs along the roads in Sebastopol. His semi-Amish farming techniques and free-range chickens create a certain rough pastoral look that people are drawn to. “A lot of farms aren’t like that anymore,” Bliss says. “They’re not pretty. They’re overspecialized, they’re overgrazed, and they don’t appeal to people to visit.”

Feeling the need to accentuate Mother Nature’s natural charm, many Farm Trails farmers have added such attractions as hayrides, petting zoos, or lunch counters. Where once people used to pick up the fruit and can it themselves, most fruit farms now have some kind of storefront where they can sell canned food items and a few token pounds of fresh fruit. Bruce Campbell, who runs a farm and herb nursery near Forestville, recalls how people used to come to his U-pick apple orchard and buy 150 to 200 pounds. Nowadays, they pick three pounds in the same time, interspersed with picnicking and lots of photos. “If we had a concession on film, we would make money,” jokes Campbell.

IS IT POSSIBLE to blend farm charm and money-making venture with more than just a photo op? Supporters of the recently enacted state Agriculture Homestay Bill think so. It allows farmers to feed and house overnight guests at their working farms, thereby combining the comfort of a bed and breakfast with the back-to-the-land nostalgia that many visitors to the North Bay are after. “It’s important to stress that these homestays will be happening on working farms, not some Disneyland version,” says Assemblywoman Virginia Strom-Martin, D-Duncans Mills, who authored the legislation. “One of the aspects of agricultural homestays that most excites me is that they will allow urban and suburban Californians to gain a better understanding of agriculture, which I believe is misunderstood all too often.

“People who’ve shared meals with the farmers who grow their food will be more likely to care about the continued health of our farms and rural communities.”

No Sonoma County farmers are immediately taking up the option as outlined in the bill, but Michael Dimock of Sunflower Strategies, an Sonoma County-based agricultural marketing firm, says it’s only a matter of time. “Tremendous opportunities remain to be fully developed in this area,” says Dimock. “Everyone’s just starting out.”

The concept was borrowed from the strong farmstay tradition in Europe and New Zealand, where government has subsidized agriculture and agritourism for years in the belief that small farmholders maintain the look–and the tourist value–of the countryside. Ellie Rilla, director of the UC Cooperative Extension office in Novato, visited England and New England a couple of years ago to examine their farmstay models, and believes that they could be implemented here in the North Bay quite successfully. “My dream would be that people could come here, they could get on the Internet, just as I did when I went to England, and figure out their whole stay,” says Rilla. “They could contact farms and farmers through one organization . . . .

“They could do their L.A. thing, and they could see Yosemite, but they could also see farms.”

A farmstay experience would be accessible to many more people than the standard wine-country B&B, say supporters. “The places could be upscale or they could be dormitories in a converted barn,” says Dimock. Such places will necessarily be more affordable: “If they’re a working farm, they’re not going to be able to afford to cater as much to their visitors.”

ONE ESTABLISHMENT that does cater to its visitors’ whims, but still manages to keep some of its activities accessible, is the Ramekins Sonoma Valley Culinary School. The cooking school is only a year old, but with a full catalog of 62 instructors offering over a hundred classes in a four-month period, the school is clearly doing well.

The key to its success seems to be its range of guests and diversified services. Some students fly up from Southern California for a weekend at the school, with classes and overnight stays in the school’s own B&B lodgings, starting at $150 a night. This fall the catalog will add customizable private tours, with visits to Sonoma County wineries, small farms, and artisan food producers.

But most of the visitors don’t want anything too fancy. They’re locals, or they drive over from Napa Valley, Marin County, or San Francisco for hands-on food experiences. And with course fees starting at $35, these three-hour classes with star chefs from the county and around the country are considered a bargain. The school also offers an assistantship program that lets would-be students attend classes for up to 80 percent off the class fee in exchange for assisting the visiting chefs.

Ramekins encourages its chef-instructors to use local products whenever possible, a move that more and more local restaurants, of all levels, are making, says Lyndi Brown, a consultant to Select Sonoma County and a longtime promoter of Sonoma County agriculture. “It’s worth promoting to tourists that they’re going to experience really fabulous food here at any point along the spectrum, whether they stop for a sandwich or they go after the big splurge. . . . To me that’s really exciting, because then [the food] is there for everyone.”