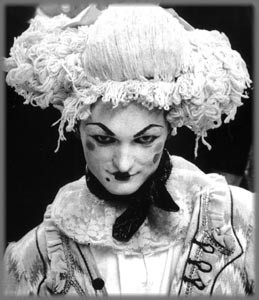 Face the fall: Jereme Anglin stars in La Bête at the Cinnabar in September.

ACTRESS Tallulah Bankhead once remarked, “It’s one of the tragic ironies of the theater that only one man in it can count on steady work–the night watchman.” Ha! If Bankhead had only seen the bounty of theater work to be had in Sonoma County, she might have reconsidered her words.

Scores of local productions are afoot this fall–not to mention the ancillary staged-reading series and other theater-related programs that will fill local stages this season.

Playwright Ken Ludwig’s Moon over Buffalo, a comic riff on a theater company’s foibles, marked a rousing opener last month for Actors’ Theatre’s 1999-2000 season. A string of sold-out performances has led to an extended run that ends on Sept. 4.

The company has also just completed installation of a new lighting system on its main stage, as well as new seats in its ancillary “Bare Stage,” which will play host to the five finalists in AT’s New Theater Works Festival, beginning Sept. 4 with Scott Munson’s The Order of Key West.

“We were really lucky to get Angels in America–it was a real coup. We didn’t have to fight for the rights to Macbeth, which is kind of nice,” says AT publicist Sherri Lee Miller with a laugh.

“Theater about theater can sometimes be dangerous–it can become too self-referential, too inside,” says artistic director Elly Lichenstein. “What I like about La Bête is that the bottom line asks, ‘Why do we do life?,’ not ‘Why do we do art?’

The Cinnabar celebrates its 26th birthday with La Fête pour la Bête, a dinner and theater extravaganza on Sept. 24.

Coming up on the latter half of its January-to-January season, Sonoma County Repertory Theatre (boasting houses in both Santa Rosa and Sebastopol) continues its run of Shakespeare’s A Midsummer’s Night Dream in Santa Rosa’s Courthouse Square at 7 p.m., Aug. 27-29.

To inaugurate the venture, Dean is producing a “modern vaudeville” dubbed ELIXIR: A Curious Mixture of Word, Music, Dance and Theatricality on Aug. 28 at 7:30 and 10 p.m. at the new location, 208 Davis St. Featured performers include spoken-word artists Karen Penuelos and Patti Trimble. Other Elixir events are set for Sept. 25, Oct. 23, Nov. 20, and Dec. 18.

Pacific Alliance Stage Company (the resident company at Rohnert Park’s Spreckels Performing Arts Center) begins its season at 7:30 p.m., Sept. 23, with the West Coast premiere of O’Carolan’s Farewell to Music, a one-person musical theater piece starring performer Patrick Ball as Tulough O’Carolan, purportedly Ireland’s most beloved musician. Next on the PASCO playbill is November’s production of Sam and Bella Spewack’s My Three Angels, a play about a triad of ex-convict gone-good who help a family put the kibosh on meddlesome relatives.

Also making a West Coast premiere is the Santa Rosa Players’ production of Big: The Musical, which continues through Sept. 12.

Inspired by the Tom Hanks movie about a young boy trapped in a man’s body, the production kicks off a fall season that also features the backstage comedy Noises Off and Arthurian musical Camelot.

FALL WILL ALSO offer some unusually daring college theater. Santa Rosa Junior College will present the world premiere of a staged version of Watermelon Nights, author Greg Sarris’ epic tale of Indian life in Sonoma County. Actors will perform one chapter from the book word for word. Sarris will appear at the gala opening on Oct. 8.

The Bodega Theater Company is both an undiscovered theatrical gem and diamond in the rough. Since moving to its new home in the rear of the Casino, a honky-tonk in Bodega, the company has seen a rapid escalation in both popularity and beer revenue.

“We’ve been doing this about six years, but since we’ve moved in the Casino the word has started getting around,” says director Lee Rhoads.

Though the Bodega Theatre Company has yet to finalize its fall schedule, Rhoads says the company plans a reprise of Remain Seated, Lois Meltzer’s farcical romp through a corrupt hospital, Jean Giradoux’s The Apollo of Bellac, and a return of its ever-evolving variety and sketch comedy show Bodega, Saturday Night.

Not to harp on ye olde “quality versus quantity” debate, but let’s hope Sonoma County’s full theater calendar fulfills the promise of its fall season rather than turning into the winter of our discontent.