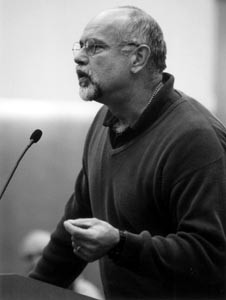 Back on Board: Former county Supe Ernie Carpenter spoke out against a proposed teen curfew at a Dec. 7 hearing before the Board of Supervisors.

“IT NOW MAKES my oldest son Jess sick to his stomach when he sees a policeman,” says Rosemary Harrahill, mother of two teenage boys in Monrovia, a city just east of Pasadena and one that has become known as the model town for daytime teen curfews.

Monrovia began enforcing the 8:30 a.m. to 1:30 p.m. curfews, during the 1994-95 school year. The law continues today–much to the dissatisfaction of parents like Harrahill, who say they have been plagued by its negative impacts.

Harrahill says her sons, aged 16 and 14, were stopped and interrogated by police 22 times in eight months while walking from supplemental public school classes to home school. “I made an effort to let officers know [the boys] had permission to be on the streets and to please leave them alone, but they told me ‘as long as minors are on the streets of Monrovia, they are subject to being cited, questioned, or detained.’

“I was appalled,” she angrily recounts.

Harrahill says police suggested a radical solution: to issue home-schoolers “bright fluorescent orange ID cards, bigger than index cards, with big black numbers on them” to flash at patrolling officers. “When in history has a group of individuals been numbered to have permission to move around in a free society?” asks Harrahill.

In April, Harrahill and several others filed a lawsuit against the Monrovia chief of police and the city challenging the constitutionality of the daytime curfew ordinance. Their court hearing comes up in March.

“They say Monrovia is a model city for daytime curfews, but, my God, that’s where it could go here,” says Santa Rosa resident Glen Wiemeyer, one of several concerned parents who have begun Sonoma County Citizens Against Daytime Curfews.

The group contends that the proposed countywide youth curfew–spearheaded by Mullins and supported by Sonoma County Schools Superintendent Tom Crawford, which includes both daytime and nighttime restrictions–would trample on the rights of young people.

Critics contend that slapping a curfew law on teens is merely a surface solution to a deeper, more complex problem–a quick fix by officials who want to appear tough on crime–instead of a probe into the underlying causes of youth concerns.

Critics also point out that while recent studies have claimed that curfews result in a 25 percent drop in youth crime, criminal activity overall has plummeted proportionately nationwide.

Most cities in Sonoma County have some kind of nighttime curfew on the books–although most aren’t strictly enforced. Only Rohnert Park’s teen curfew extends to daytime hours. It restricts teens from loitering in public places between 8:30 a.m. and 1:30 p.m. Parents of violators can be fined up to $500 or jailed up to 60 days.

The proposed county law would for the first time affect the county’s far-flung unincorporated areas and would also set daytime restrictions. If both are enforced, teens would have to stay out of sight for a good portion of each day and evening.

Other Side of the Story: County officials argue that a stricter curfew will curtail such teen crime as vandalism at Petaluma’s Putnam Plaza. Petaluma teen Alison Anderson, 16, left, told the Independent this spring that it is wrongheaded to punish all youths for the rash actions of a few. Curfew critics agree.

MULLINS, who helped draft the Sonoma County measure, says the law would help deal with a supposed increase in juvenile violence and gang activity and address the problem of truancy. But Wiemeyer disagrees. “We believe the daytime curfew goes about the problem from the wrong perspective. It essentially penalizes law-abiding citizens who bear the responsibility of proving their innocence for simply having been out in public,” he says. “It’s totally unnecessary for our youth to have to prove their innocence.”

If adopted, the Sonoma County ordinance, which would affect more than 60,000 students, would make it illegal for anyone under 18 years old to be in “any public or unsupervised area” between the hours of 11 p.m. and 6 a.m. Sundays through Thursdays. The curfew would run from midnight until 6 a.m. on Friday and Saturday nights.

In addition, minors would be prohibited from being out of school between 8:30 a.m. and 1:30 p.m. on days when school is in session. There would be certain exemptions, such as when a minor is accompanied by a parent or guardian or is on a legitimate errand or other activity: returning home from a “movie, play, sporting event, study group, religious activity, or school activity.”

Last month, the proposal seemed to be making headway and was slated for public comment, but during a recent Sonoma County Board of Supervisors meeting, Mullins abruptly withdrew the proposal pending further examination after outraged parents presented him with an information packet detailing their concerns.

In addition, Sonoma County Schools Superintendent Tom Crawford says that while he and other local educators support the idea of a curfew to reduce daytime crime and boost attendance, he’s been taken off guard by the parental outcry. “I’ve had a significant number of calls and some letters from people worried about police harassment–it’s been very surprising to me,” says Crawford.

Meanwhile, Mullins says he needs to review the information, but adds: “My inclination is to put [the ordinance proposal] back on the calendar.” Next week he will meet with a representative from Sonoma County Citizens Against Daytime Curfews.

Meanwhile, parents of home-schooled students–and students in a range of activities, including those who take independent study classes, attend day classes at Santa Rosa Junior College, participate in school-to-work programs, have staggered school schedules, or attend year-round schools–are beginning to worry about potential impacts if the law is passed.

Daytime-curfew opponents say existing truancy laws should be able to adequately deal with the problem of errant teens. “It doesn’t have to be a blanket thing thrown over all the young people in Sonoma County,” says Wiemeyer.

“This is a symptom of a county that’s given up,” former county Supervisor Ernie Carpenter recently told the Board of Supervisors after he read the proposal. “We need to stop suspending kids from school–this indicates a failure to deal with young people.

“I also take issue with the whole gang thing,” Carpenter adds. “I bet fewer than 100 people are on the Sonoma County gang list, and for that all the young people in the county will have to suffer. When I saw this [proposal] on the [board’s] agenda, it made my toenails curl.”

Sonoma officials are slated to discuss the tougher curfew on Jan. 7, and it is expected to pop up soon on the city council agendas in Petaluma, Healdsburg, and Santa Rosa.

Santa Rosa Police Chief Mike Dunbaugh supports the curfew proposal, seeing it as “a tool to keep people safe,” adding that “most victims of juvenile crime are juveniles.

“We’d like to see responsible daytime curfews. There’s a problem with kids not being in school when they should be. Truancy laws leave a lot to be desired, particularly when you’re dealing with parents who don’t care,” says Dunbaugh.

But he adds that the use of a curfew has to be a discretionary tool and has to be balanced with legitimate concerns. “We have to be careful that when youngsters are doing legitimate things we don’t unjustly interfere,” he says, adding that he favors getting input from the Santa Rosa Teen Council before enforcing such a law.

But Santa Rosa City Councilwoman Noreen Evans wonders about the efficacy of a countywide daytime curfew law. “Most criminal activity by teens occurs between 3 p.m. and 5 p.m. after school is out and before parents come home from work, so you have to wonder, How much sense does this [proposed curfew] make?”

Harrahill, the Monrovia parent, agrees. “The whole thing is outrageous. If you treat children with dignity, honor, and respect, they will respond in kind. You can’t do that by setting curfews.

“We’re not going to stop fighting this until the constitutional freedoms of every child in Monrovia are restored.”

Holiday Cuisine From the American Southwest