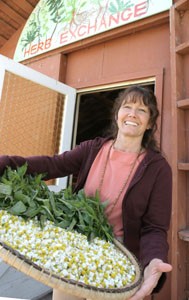 Voodoo Economics: Leslie Gardner, with a basket of fresh chamomile, spearmint, and skullcap, hopes to raise money for the herb exchange at the upcoming benefit.

The Sonoma County Herb Exchange brings growers and practitioners together

Leslie Gardner doesn’t want to use the word “voodoo” to describe the magical qualities of herbs, but she’s tempted. Obviously, any suggestion that the use of medicinal herbs dips into black magic isn’t something she’d like to promote. After all, she’s been working with growers and practicing herbalists for years, and to her it’s nothing if not mainstream.

Gardner is the director and coordinator of the Sonoma County Herb Exchange, and it’s her job to bring the various medicine makers, practitioners, and “kitchen witches” (the women in their kitchens making their own herbal remedies for family and friends) together with the herb growers. The exchange’s catalog lists about 100 fresh herbs, from agrimony to yerba santa. There’s also a selection of dry herbs and infused oils on the list–a panoply of medicinals primed for tinctures, extracts, aromatherapy, or perhaps just a good cup of tea.

But talking about that voodoo thing, that’s where her bright green eyes sparkle. Call it magic, call it spiritualism, Gardner believes the herbs have something about them–“that juicy quality of the unknown,” she says–that draws people to them.

“They’re such amazing plants,” she says. “Compared to vegetables, which are so domesticated, herbs are kind of woo-woo–they have a magic.”

Jokes about her last name notwithstanding, Gardner has not always been, well, a gardener. She’s been in charge of the gardens at the California School of Herbal Studies in Forestville since 1991, but prior to that she was a practicing nutritionist and herbalist, with a masters in herbology. “Over time I found myself more and more drawn to the garden and away from clinical herbalism,” she says.

The Herb Exchange is a project of the Sonoma County Herb Association, the umbrella group that puts on the annual herb festival at Santa Rosa Junior College. The exchange is about three years old now and grew “organically,” Gardner says, “from various members of the community.”

Gardner points out that Sonoma County is an amazing growing area, and “because of the herb school, which was founded in 1979, we’ve had so many herbal branches grown out from that–whether it was Rosemary’s Garden, or whether it was all the various herbalists who have begun to practice in the area, or people growing herbs.”

As the Sonoma County Herb Association began to coalesce in 1997 and 1998, “we began to realize that we should be growing our herbs here,” says Gardner. She started sending out a newsletter to herbal practitioners, listing local growers and what they were selling, so that they could get hold of fresh medicinal plants. The conversations continued, and it became clear that everyone wanted a central location, “to enable people to come to one spot.

“That’s what did the trick,” adds Gardner. They got set up as a nonprofit, found grant money to create the infrastructure, and rented land from Laguna Farm in Sebastopol (coincidentally, or not, Gardner is married to Laguna Farm’s Scott Mathieson), where they were offered the best piece of land and the best rent. They use two buildings on the farm: a small office and a barn that serves as the storefront.

With no money to pay staff, Gardner turned to the growers for help. “The exciting thing,” she says, “was that they all said let’s morph into a grower co-op, and we’ve been able to do everything by volunteer labor.” They make enough money to pay the rent and pay Gardner a small salary, and all the other tasks are rotated through by volunteers. “It’s not as efficient as having a staff,” she says, “but [everything] is kind of getting done.”

As a result of losing the mail-order and delivery business, the herb exchange has remained a local presence, “for better or worse,” notes Gardner. “The local folks are thrilled.”

Now the herb exchange deals with about 16 to 18 farms, from backyard growers to small farms, all organically grown (though not all are certified organic). The exchange operates in two realms: retail sales and preorder arrangements. Practitioners and medicine makers can make orders (the catalog is available online) by Wednesday, then pick up their plants at the exchange on the following Tuesday. Growers drop off the preordered herbs in the morning, and the buyers pick up in the afternoon, so everything is fresh.

Over half of the exchange’s business, though, is conducted via contractual arrangement with medicine makers like Forestville-based Simplers Botanical Company. The companies preorder a certain amount of a medicinal herb, deliverable when it’s ready. “This is the greatest thing for the growers,” Gardner says, “because they know how much they’re going to sell, how much they’re going to get per pound, and they know they can harvest it when it’s at its optimal point, medicinally.”

This method also promotes sustainable business practices. Rather than forcing growers to wait for the retail orders to dribble in, they get a sure thing. A few of the growers have been able to make a living off what they sell through the exchange.

Another issue that’s come up, says Gardner, is biodiversity. She notes that the influx of grape growing has been “wonderful” for the county, because it’s helped to keep Sonoma agricultural. But monocropping and its concomitant issues–betting the farm, basically, on one crop–is a serious problem that the exchange hopes to alleviate, or at least educate about, through outreach.

Two wineries, Davis Bynum and Topolos, both of which are committed to preserving biodiversity, have been open to the idea of intercropping or growing medicinal herbs as cover crops. The goal, Gardner says, is “to be able to pull in grape growers and help them to be part of the solution rather than part of the problem.”

While some plants are being pushed into oblivion by monocropping, others are being overharvested. Ginseng and goldenseal are two hugely popular plants that are in short supply. Gardner is working on cultivating goldenseal here, though she says that it is one of the few plants that doesn’t like this climate. Wildcrafting–gathering herbs from the wild rather than cultivating them–is a “time-honored herbal tradition,” she says, but it has also contributed to the near extinction of plants like ginseng.

Responsible wildcrafting, though, is encouraged, especially for plants like Saint John’s wort, which is on the USDA’s list of noxious herbs (it’s considered an invasive weed), so it can’t be cultivated.

But back to the magic of herbs. “All of us got into this somehow because of that magic,” says Gardner. “It’s an act of empowerment to grow your own herbs.” She says that when people ask her what herbs will be good crops or what will make money for a grower, her answer is often “Put some things in that you’re drawn to.” She believes that growers will find which plants grow well for them.

The greatest interest, recently, has been in Chinese and Ayurvedic medicinal herbs. “It’s an exploding field,” Gardner says. She admits, though, that the herb exchange is an insulated group in some ways, “because we’re just providing the herbs, and they [practitioners and herbalists] do the education out in the community. . . . Some of our best educators are people who work in the supplements departments of the stores. Those are the folks who interface with the public.”

The exchange hopes to offer workshops at some point, to get out into the public, but at the moment members are just hoping to be able to pay the volunteers–that, she says, is what the benefit is for.

The Sonoma County Herb Association benefit for the Herb Exchange is June 7, 10am-4pm at the Sebastopol Town Plaza. 707.824.1447. www.sonomaherbs.org.