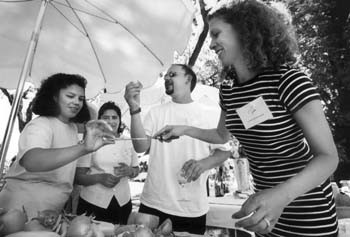 Gathering of the scribes (and others): Food, wine, and camaraderie flow freely at the Sonoma County Chef’s Tasting, an outdoor gathering of Sonoma and Napa vintners and restaurateurs that is akin to a high-brow foodie Woodstock.

Roll out for the magical culinary tour

A LOW-FLYING PLANE adds a thrill of danger to anything, even an upscale food event like the Sonoma County Chef’s Tasting held Aug. 23. Everybody around me at Richard’s Grove and Saralee’s Vineyard in Windsor seems curious but unconcerned by the regular buzzes of aircraft (that’s what you get for booking the same day as a nearby air show), so I stifle my conspiracy theories and turn my attention to the spectacle before me.

And it is a spectacle, in spite of the outdoor setting and casual attire (maybe because of the casual attire). The event, now in its sixth year, is designed for chefs, food purveyors, writers, and anybody else having anything to do with the Sonoma County food industry to get acquainted. But if anybody ever needed an excuse to drink early and graze hard, this party would be it.

There’s a festive air in the park as guests begin to check in. As a member of the press, I zip to the head of the line and pick up a free tote bag, a press packet, and a badge with both my names spelled wrong.

The workshops are many and varied, so I pick one that offers an answer to my favorite culinary ship-in-a-bottle: sausage-making. Gerhard Tele of Napa’s Gerhard Sausages feeds the grinder while answering food-geek questions about post-marinade residual moisture (sounds like Guy Fieri of Johnny Garlic’s might be researching some additions to the menu). The answer is lost on my companion and me; we are too distracted by the Pink Floyd undertones of the process.

Easier for me to take in is the Kendall Jackson-sponsored lecture on the pairing of wine with vegetables based on color. Head gardener Jeff Dawson leads the group around a color wheel of vegetable snippets as we actually taste for ourselves how smoothly red wine goes with beets, and how a yellow tomato blends almost seamlessly with a chardonnay but gets mowed over by even a lighter merlot.

Overall, the tomato population at the tasting is surprisingly hit or miss in the quality department. KJ’s tomato table is a delight, and good thing, too, since they’re banging the drum for their tomato festival on Sept. 12. A bowlful of cherry tomatoes at the DaVero olive oil stand really plays up the fruity flavors of the oil. (Thank you, sir, may I have another?) But a nearby dairy table (whose name, fortunately for them, escapes me) pairs a bland, I mean subtle, mozzarella with slices of watery tomatoes. Bleah.

In between workshops, I scan tags. It’s the name of the game at large-scale events like this. I recognize a few faces, a few names. Ooh, someone from Appellation. Would now be a good time to let him know that the name of his otherwise elegant wine-culture magazine always makes me think of handicrafts from the Ozarks? Hey, the Grossi Farm people are out. Nice tomatoes! The colors of summer–red, yellow, orange–burst out all over the whole vegetable area: Mother Nature’s best and brightest is on display. Toyon Books’ board is groaning with a feast of books, and there are free samples everywhere.

The wine tables, of course, draw layers of tasters two and three deep. Limit the search to labels that are never going to turn up in the staff refrigerator. Hey, look, Iron Horse! As winemaker Forrest Tancer pours me a chardonnay he mentions that his wife, Joy Sterling, is about to publish a third book. The chardonnay is too dry for my taste, but the sparkling brut rosé is lovely at 10:30 in the morning. Yes, he says, it’s a breakfast wine.

That may qualify for an only-in-wine-country award.

The food samples are a bit more traditional. There’s something so pleasingly focused about meat on a toothpick. No potatoes or pasta or greens to make that plate well-rounded: just a piece of meat on a tiny stick. Bite-size barbarianism.

I am bemused by the little girl standing near the table of Sonoma County Poultry, where boneless duck breasts are being seared next to a perky ceramic duck. “Why is the duck there, mommy?” she asks. Her mother is busy procuring two toothpicks of dead duck. “Mommy!” the tot persists loudly, “why is there a duck on the table?” None of the adults nearby turn to look, and the mother says distractedly, “Well, it’s decoration, dear.”

Great shades of Babe! Sounds like the birds-and-bees discussion needs to debunk more than babies under the cabbage leaves.

Just before lunch, we sit in on a workshop on palate development. Chef Keith Keough, president of the prestigious California Culinary Academy, runs a packed tent through the paces with five kinds of salt, six kinds of dried powdered chili, sugar, and vinegar. The salts are easy, the chili powders, mixed with hot water to release the oils, are less so to this chili wuss. Some Rocky Chicken reps range themselves behind our table and ask us how things taste, which goes over like a dentist asking about your vacation when he’s got a drill, a vacuum hose, and both hands in your mouth at once. I gamely sample everything, and am rewarded with a tear-fogged but indelible memory of the different flavor points.

AFTER SOOTHING our chipotle-charred palates with some sweet butter on bread, we sit down for lunch. There are 36 chefs, mostly from Sonoma County, a few from Napa and San Francisco, who pair up talents to feed over 400 people. At a table full of well-heeled people whose eyes I can’t see through their sunglasses we end up eating lamb sausage shishes and, for dessert, a crunchy but oh-so-good baked apple on brandied currant toast with lavender-scented ice cream. I want to talk with the sausage maker, who is seated on the other side of the table, but it would be impolite to yell. We content ourselves with enthusiastic dining and a spirited critique of our table partners’ jewelry and prissy eating habits. (Just pick the toast up with your fingers, dammit!)

Afterward we visit our cooks, Pascal Chureau from Mistral and Christopher Fernandez of Crescent Park Grill. My French-speaking friend gets into a light banter with Chureau (everything sounds like banter in French), while I pass our compliments to Fernandez. He says it was just a good match. “When we faxed our initial ideas to each other, they were very similar,” says Fernandez, who had met his collaborator for the first time earlier today.

Hey, if the cooks like it, then no complaints here. Keep the chefs and the farmers networking and happy, the theory goes, and the food in our restaurants will just keep getting better and better. But next year I’m going to volunteer, scooping ice for water glasses or emptying garbage cans for the cooks: anything except just sitting and eating, and then fighting for toilet paper afterward in a hot restroom full of half-drunk women.

A few workshops on a lazy summer afternoon are nice, really nice, but not quite enough for me.