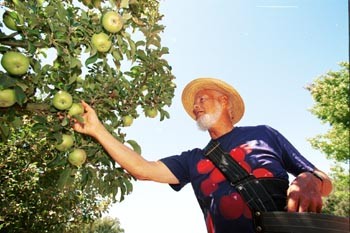 Picky, picky: Terry Harrison of Sonoma Antique Apples in Healdsburg has traveled throughout the United States in search of obscure apple varieties..

Heirloom apples forgotten, but not gone

NEXT TIME you’re at the grocery store, pay attention as you pass by the apples. Red, green, and yellow, maybe green with red stripes, right? Now, don’t buy anything. You know what they taste like. Instead, sit down and read a few excerpts from The Book of Apples (Ebury Press, 1993) and ponder the possibilities:

Ashmead’s Kernel: “Strong, sweet-sharp intense flavour reminiscent of fruit or acid drops and of Nonpareil [another apple], but sweeter than its probable parent. Firm, white flesh.”

These are just three of the more than 2,000 varieties described in The Book of Apples, which catalogs the holdings of just one horticultural orchard in England. On the other side of the Atlantic, the New York State Agricultural Experiment Station in Geneva, N.Y., has either germ plasm or actual trees representing close to 4,000 varieties and records the existence of over 7,000.

Such numbers raise the question: Where have all the apples gone?

“Asking where the heirloom apples have gone is like asking where the Model Ts are,” says Tom Vorbeck, owner of Applesource, an apple-tasting service based in Illinois. “They’re still around, but they’re never going to be in significant commercial production again.”

“Significant commercial production” is perhaps a subjective phrase, as it turns out. A particular apple may have been all the rave for English Victorian garden parties, or it may have been the premier cider apple all along the Eastern seaboard in the late 1700s. Some apples have been in recorded cultivation for several hundred years. But in all that time, no one apple, or even half a dozen apples, ever dominated the market.

Before they were heirloom, these apples were grown either in home orchards for home consumption or on relatively modest-sized farms for local markets. The technology didn’t exist yet to keep them for very long; consequently, apple varieties were once nearly as seasonal as good peaches, with the first arriving in early August and the very last stalwart keepers ripening into perfection well into spring. Apples were chosen not only for their harvest dates and keeping properties, but also for specific end uses–hard and nonalcoholic ciders, sauces, pies, preserves, and a full menu of flavors and textures for eating fresh at the end of a meal.

By the mid-1900s, though, the many varieties of apples had lost much of their significance for people who had neither the space nor the time to make their own cider and applesauce, let alone grow their own food. Instead, people went to supermarkets, where, even in the produce department, appearance and packing determined shelf placement, stock rotation, and sales. Apple breeders searched out uniformly pretty and “inoffensively flavored” specimens–Red Delicious being the most (in)famous, and the public ate them up: at the height of their popularity in the ’60s, ’70s, and ’80s, around 50 million boxes of Red Delicious apples were being shipped out of Washington state each year.

“Most Americans buy with their eyes, not with their taste buds,” says Hoyt Adair, owner of the Classical Fruits nursery in Moulton, Ala. “You put Spitzenburg on the shelf, no one would buy it.”

Reportedly one of Thomas Jefferson’s favorite apples, the Esopus Spitzenburg has an acclaimed flavor. The Book of Apples calls it “rich [and] fruity,” with “lots of character.” As often happens, one person’s character is another’s character flaw: the Spitzenburg also suffers from a condition called russeting, or rough patches.

OTHER OLD-TIME apples certainly have their share of flaws that have proven fatal in the world marketplace. For starters, not all old apples taste that good.

“Just because you find something in an old orchard doesn’t mean it’s great,” says Terry Harrison of Sonoma Antique Apples in Healdsburg. The Harrisons have traveled the country to investigate apples, but they’ve left more than a few behind. “Some we didn’t collect because we didn’t think they were good enough.”

Even if an apple tastes great, it may produce lightly, erratically, or only every second or third year–all problems for a farmer who needs a regular, predictable crop for income. Others aren’t strong enough for weather extremes or are too susceptible to diseases (although there exist some heirlooms that have remarkably high resistance to the diseases indigenous to their region). Delicate or smaller apples such as the perfumed Lady apple have naturally higher labor costs, being more time-consuming to pick. The Gravenstein, a regional favorite in Northern California, where it was brought by Russian explorers in the early 1800s, nonetheless is like many old-time apples in not keeping well. Others have the reverse problem: they keep too long, requiring long storage to mellow, a disadvantage in our culture of instant gratification.

But the increasingly gourmet tastes of America, not to mention a heightened interest in local agricultural specialties, have fueled a renewed interest in these apples, say growers. “People are starting to realize that they don’t want beautiful apples. They want a good-tasting apple,” says Sam Benowitz, owner of Raintree Nursery in Morton, Wash. “We’re lucky to have a really terrible apple [the Red Delicious] as the standard. It makes people really interested in other varieties.”

IN RESPONSE, growers and breeders are moving their wares to a very modern arena and putting their catalogs on the Internet. But to cultivate new consumers, they rely on a very old-fashioned event: tastings. Hoyt Adair in Alabama now has close to 1,000 visitors during his tasting event. And the Harrisons of Sonoma Antique Apples get several hundred people to try 35 different apples at their tasting in early October.

“Apple tastings are really the best way that people find out about these apples,” says Carolyn Harrison.

Most growers agree that America’s new longing for old-time tastes has as much to do with nostalgia as it does with flavor. “Nostalgia plays a large part,” says Judy Wells of Southmeadow Fruit Garden, in Baroda, Mich., home of more than 300 apple varieties. “We get so many calls from people that start, “Grandma had a tree in her front yard, and it was the best apple.’ ”

But if Grandma moved to the suburbs and commercial sales are impossible, where does that leave the apples? Right where they were 100 years ago: firmly in the hands of a few farmers and dedicated home orchardists. “You can put them in a preservation orchard or save their germ plasm,” says Carolyn Harrison. “But if you want to really keep them alive, you’ve got to get them out there in everybody’s orchard.”