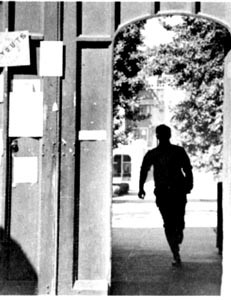 WHAT IF you were an artist in high school? And you were putting together your portfolio for acceptance into art school, working hard to represent yourself with different styles, all recognized by other serious and professional artists? What if someone then told you your work was threatening, assuming that you might even be a danger to your fellow students, and took you out of school for the remainder of your senior year?

It started with a piece of artwork she posted on the door. It was done in a style known as “repetitive art” in which the artist spirals words from the center outward. Boman’s graphic piece detailed the psychotic ramblings of a schizophrenic man obsessed with finding out who killed his dog. “I did it in the last 10 minutes of school, during tutorial–I just took it and hung it on the [art classroom] door. I did that with a lot of my work,” Boman says.

The next day, a school office employee saw the work and immediately took it down, according to Boman. It was brought before the principal. The principal felt it was inappropriate, even threatening, and Boman was called in for questioning.

During the meeting, Boman was allowed to go to the bathroom. “I took the original and tore it up and flushed it down the toilet. I was so scared. I never got in trouble before,” Boman says.

She was told the school operated under a zero-tolerance policy for violence. She was suspended for five days and was allowed to return to school only after a hearing with the school board.

Boman went home and called her mom. “I told her, ‘I think I’m going to be arrested for a piece of artwork I did.’ ” Boman wasn’t arrested, but that day was the beginning of a fight that involved the American Civil Liberties Union, the school board, and the U.S. District Court House in Wichita, Kan.

First, three representatives of the school board, gathered to hear what had happened and to hear people defend her. Thirty people showed up, including her parents and her sister. While the board agreed that Boman wasn’t dangerous, it refused to allow her to return to school.

“They decided I wasn’t a threat, but in case anything happened they didn’t want to be held responsible,” Boman says. She didn’t get officially expelled, but she received a suspension of 81.5 days–the rest of her senior year, exactly.

SINCE the school board wasn’t going to let that happen, Boman asked for help from the ACLU, who got her a lawyer, Paul Rebein. They began a negotiation with the school board, during which Boman and several other witnesses testified for her. Jill Eggers of Wichita State University and Mary Kay of Bethany College, both women artists with a master of fine arts degree, were among her supporters.

Boman’s hometown also rallied around her. “There were people outside with signs and they were singing ‘Kumbayah.’ The whole town wore yellow ribbons. A lot of people didn’t understand the [art] piece itself, but they know me. They thought the school went overboard.”

During this time, Boman’s initial fear turned into a sense of injustice. “I felt that the school board was trying to use me as an example,” Boman says. “I’ve never been in trouble. I’m a straight A and B student. They all know who I am and what I’m about–they know that I’m not a threat and that I am a serious artist. But at that point they didn’t really care.”

Boman’s legal counsel agreed. Once they felt they had built a strong enough case in Boman’s favor, they went before the U.S. District Court for a preliminary trial. Judge Wesley E. Brown heard from both sides and decided not to send it to trial.

“The judge said that I should go back to school and that the five days of original suspension was punishment enough. Anything further was basically uncalled for and really not legal,” Boman remembers. Judge Brown told the school board they were right to pursue the situation, but should have known within 15 minutes that Boman did not present a threat.

BOMAN immediately returned to her senior year. But things were not quite back to normal. “I didn’t expect anything would change, but some people were kind of mean,” Boman admits. “As time went by, people loosened up. I think there were kind of hard feelings. I don’t know if some people felt that maybe the judge ordered the wrong thing–I’m not sure what it was, really.”

Now Boman is looking forward to starting this fall at Bethany College in Lindsborg, Kan., where she has received a scholarship and plans to study (of course) art. “I’m very much looking forward to college. You can explore every realm of being without having to worry about limitations, about the way things are going to be perceived. People are more open-minded. You can focus on improving the meaning behind your art.”

The experience may be behind her, but Boman says that her art continues to be influenced by what happened. “I used to draw people scared of clowns and weird creatures. All I’ve drawn since I got back is people.”

Things have settled down, and Boman seems pleased about where her life is now headed. Remembering something Judge Brown told her the day of her preliminary trial, Boman gets serious.

“He told me not to prove him wrong. He said, ‘Young lady, you and your father know that today you received justice. Now it’s up to you to calm things down.’ ”

With a bright future ahead of her, Boman is doing exactly that.