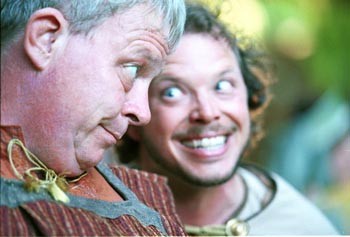 The Merry Wives of Windsor

SCR’s annual “Shakespeare in the Air” programming (later performances will be held in Courthouse Square in downtown Santa Rosa) is now in its eighth year and firmly fixed in the firmament of local theater tradition.

“Every year, people talk to me on the street and ask which Shakespeare we’re doing,” says SCR artistic and executive director Jim DePriest. “They talk to all their neighbors and friends and get all their kids to come out.”

Of all of Shakespeare’s creations, Falstaff is the most aligned with the Freudian concept of the id. The rotund rogue is completely motivated by his appetites–or at least those that originate in his stomach and below. In The Merry Wives of Windsor, Falstaff gets an eyeful of two comely wives of Windsor and schemes to seduce both of them. He is unaware, however, that the women share not only confidences, but also the identical love letters he has sent both of them. In retaliation, the ladies set about teaching Falstaff a lesson.

DePriest, who directs the play, credits the informal, rustic setting and the natural ambiance of the park (grass, trees, and limited plumbing) with supplementing the Shakespearean experience.

“Performing Shakespeare’s plays in parks is certainly nothing new, but what I think makes it so great is that having them outside just gives the play more of a festival feeling, especially when you’re serving food and wine,” he says, adding that theatergoers are encouraged to bring a picnic dinner or purchase one from the smorgasbord of catered suppers available at the evening shows.

Though DePriest has had success staging Shakespeare indoors, he enjoys the freedom outdoor productions afford both the theater artists and the audience–a fact that’s appreciated by theater companies around the North Bay .

Other Offerings Around the North Bay

“It’s a totally different feeling than being within the restrictions of those walls and rigid seating. Out at Ives Park, the audience can put out a blanket or a folding chair and spread their food out,” DePriest says. “It’s also different in terms of just basic ‘stage pictures,’ because if you have somebody turn upstage or even give a profile, their voice just goes off up into the timbers.”

DePriest also appreciates the “natural” setting the park lends to the outdoor shows and leaves much of the art direction of the productions to the civic planners and preservationists of yore.

“Some of the park’s trees have been there for probably a hundred years and are 70 and 80 feet tall,” he says. “They add a natural background to the stage that you can’t duplicate inside a theater. It’s just magical.”

Another bit of theatrical magic occurs with the physical transformation of veteran Sonoma County actor Gerald Haston into the mountainous, pleasure-seeking Falstaff. Seventy pounds of padding and one pair of lamb-chop whiskers later, Haston’s Falstaff looks something like a debauched Neil Young on a fare-thee-well tour.

“We’ve got him as big as the lobby of one of our theaters. At one point he has deer antlers on his head–it looks very funny,” says DePriest, who has a soft spot for the period evoked by Shakespeare’s comedy. “I like the period in which the play is written–you’ve got all the brightly colored costumes and actors coming up through the audience who could just reach out and grab somebody’s wine if they want to, they’re so close.”

THOUGH they’re too young to legally commandeer one’s cabernet, many younger actors are included in the production’s cast. Many of these folks were homegrown in the SCR’s in-house Young Actors Conservatory before graduating to the stage.

“We are very pleased to be able to cast students, current and alumni, when we have a role that is age- appropriate in one of our productions,” says artistic director Diane Bailey. She adds that on Sept. 3 at 4:30 p.m. an hourlong selection of scenes from Shakespeare’s oeuvre will be performed by some of the company’s young thespians, preceding one of the Courthouse Square engagements of The Merry Wives of Windsor.

“Because these students need to be able to act with professional actors, they receive specific coaching from the conservatory director, especially vocal training to meet the needs of performing outdoors,” says Bailey.

“We’ve had great success with casting our most talented young actors in our Shakespeare productions because of our talented and dedicated conservatory directors, Jennifer King and Steven David Martin,” says Bailey. “The invaluable learning experience for our young actors is one they will carry with them their entire life and career.”

IN THE PAST, SCR has fielded calls from theatergoers concerned about the safety of attending a play performed in the urban jungle of a burgeoning metropolis like Santa Rosa–especially after sunset. Though bemused by such concerns, DePriest simply assures them that “Shakespeare in the Air” is relatively hazard-free entertainment.

“It’s interesting–when we were doing Shakespeare in Courthouse Square last summer, I had about 20 calls from people asking, “Is it really safe to come to downtown Santa Rosa at night?’ ” he recalls. “What that tells me is that the public perception of Santa Rosa is much different than the reality. It’s in that transition between a small town and a city.

“The people that called me took exception to people on the street asking them for quarters, or some of the kids over in the park who dress and do their hair differently than the rest of the population,” he continues. “They’re intimidated by that? God, I mean, this is a city! It has city problems and all kinds of people downtown, but, as I tell people, I feel perfectly safe walking downtown at night. It is quite a benign place, I think.”

Theatergoers, beware: Roving merrymakers abound in city parks through August. Be particularly wary of the fat ones wearing antlers.

The Merry Wives of Windsor begins Friday, Aug. 18, with a gala fundraising dinner and performance. Tickets for the fundraiser are $50 and must be purchased in advance. Subsequent performances run through Aug. 27 (except for Monday, Aug. 21, when there is no show) at Ives Park in Sebastopol; audiences should bring lawn chairs or blankets and can bring picnics or purchase boxed dinners for $5 to $8 at the park. The play moves to Santa Rosa’s Old Courthouse Square Sept. 1&-3. Both venues open at 5:30 p.m., with a 7 p.m. curtain. Admission is $15. Tickets are $5 for the Young Shakespeare performance on the square Sept. 3 at 4::30 p.m. All performances free for kids 12 and under. For details, call 544-7278.