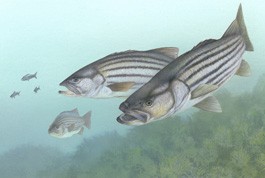 Is striped bass legislation nothing more than a diversion from water diversion?

SCAPE-FISH: Some biologists charge that the striped bass are being targeted by water-starved central valley farmers eager to gain more Delta water.

They are a nonnative invasive predator. They came from the Atlantic by train, in 1872, under the wing of an ambitious bucket biologist, and in the San Francisco Bay estuary, that first colony of 300 baby striped bass found a perfect environment. The species exploded in number, and by the 1930s an estimated 12 million of the anadramous fish lived along the West Coast.

But this winter, the striped bass, which has been a favored game fish for decades, came under attack. Assembly Bill 1253, introduced March 2 by Assemblywoman Jean Fuller, R-Bakersfield, aims to declassify the species as a recognized game fish in California. Her bill would delete “striped bass” from state documents, including the Department of Fish and Game code, with the intention that the species, if denied all protective fisheries regulations, might vanish from state waters.

Fuller blames striped bass as being one of the primary causes of the Sacramento River Chinook salmon fishery collapse, as well as the dwindling of the much-discussed Delta smelt. Her bill is scheduled for review by the Committee on Water, Parks and Wildlife on April 28 in Sacramento.

Some biologists and sport fishermen believe that AB 1253 is nothing but a diversionary tactic designed to draw attention away from San Joaquin Valley water users, whom many conservationists blame as the chief cause of environmental ruin in the Delta. These same critics deny that “stripers” constitute the threat to native fishes that Fuller says they do. A report published in May 2008 in the Environmental Biology of Fish analyzed the gut contents of striped bass collected between 1963 and 2003. The authors, biologists Matt Nobriga and Fred Feyrer, reported that Chinook salmon never made up more than 1 percent of fishes found in the bellies of dissected striped bass.

Dr. David Ostrach, a UC Davis research scientist, calls the idea of eliminating a single predator from a complex ecosystem with the supposed hope of assisting the recovery of collapsed fish species “absurd.” Water contamination, other invasive nonnative species and freshwater diversions from the Delta to San Joaquin Valley croplands are the major causes of the collapse of the Sacramento’s fisheries, says Ostrach.

Yet striped bass make an ideal candidate on which to cast blame.

“The striped bass is the nonnative fish that everybody knows. It may be an introduced species, but it’s coexisted with salmon for a hundred years,” Ostrach says.

Assemblywoman Fuller, who communicated with the Bohemian by email, sees things differently.

“According to the California Department of Fish and Game, over 1 million adult striped bass exist in the Delta, while the Central Valley Chinook salmon populations have been reduced to just a couple of thousand. To me, that does not illustrate two species successfully coexisting.”

Executive director of the California Sportfishing Protection Alliance Bill Jennings says that overconsumption of water by farmers in the San Joaquin Valley is by far and away the leading cause of the state’s salmon fishery collapse. Each year, a busy gauntlet of pumps along the Sacramento and in the Delta send some 7 million acre-feet of freshwater—plus uncounted incidental minnows—southward into the San Joaquin Valley, where Fuller is from. In fact, those who support her bill include parties with a pointed interest in accessing the Sacramento River’s water, like the Kern County Water Agency, the Modesto Irrigation District, the Metropolitan Water District of Southern California, the Friant Water Authority and the Eastern Municipal Water District.

Jennings believes that what these groups really want is more water.

“This bill is a smokescreen to hide the real reasons that anadramous fishes are disappearing,” he says.

Dr. Peter Moyle, a biologist at UC Davis and one of the best-known fisheries scientists in the West, says that predation by striped bass upon salmon and smelt does occur to a limited degree but mainly in fast-moving diversions created by pumps and dams, isolated man-made environments in which striped bass can easily ambush wayward salmon smolts and delta smelt. Otherwise, Moyle says, predation by stripers upon Delta smelt and Chinook salmon is negligible.

Doug Demko, a biologist with the private consulting firm Fishbio and a supporter of AB 1253, says that the limited numbers of endangered fishes found in the bellies of striped bass may only be a function of their relative scarcity; there are almost none left for the bass to eat, he says.

Demko points to a modeling system developed by biologists with the National Marine Fisheries Service, which predicts that a given juvenile Chinook of the Sacramento’s winter run faces a 9 percent chance of seeing the gullet of a striped bass.

“But when you look at the real gut contents of real striped bass, it’s just not true,” Ostrach says.

Ostrach has committed much of his career to studying striped bass, but he says he has no self-serving motives for preserving the species. “As a fisheries biologist, my job is to find out what’s going on in the ecosystem. If striped bass were really the cause of Chinook salmon and Delta smelt declines, I’d be the first to raise a red flag.”

But thirsty farmers were the first to sound the alarm, and for some, like Ostrach and Jennings, that seems just a bit too fishy.