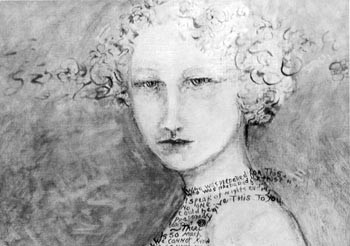 Red-letter day: Irene Belknap’s Gifts is among the works on offer at “Seeing Red.”

SoFo2 exhibit will have you ‘Seeing RED’

THE COLOR RED means radically different things to different people. To some, it signals danger; to others, it screams “Come hither.” To the folks who write the encyclopedia, it’s “a hue of the long-wave end of the visible spectrum, evoked in the human observer by radiant energy with wavelengths of approximately 630 to 750 nanometers.”

But for Elisa Baker, exhibits coordinator for the Cultural Arts Council of Sonoma County, the color is the theme of the council’s latest exhibit, “Seeing RED,” currently at the SoFo2 Gallery in Railroad Square.

A fusion of red-drenched visual works and poetry that evokes the color, the exhibit culminates in a reading on Saturday, July 15, by five young and five adult poets against a backdrop of 57 works by artists from throughout California.

Baker’s inspiration for the exhibit came, in part, from a poem about the color by local poet Penelope La Montagne. A meditation on red as a galvanizing life force, “Penelope’s poem was the initial ‘seed-poem,’ or the seed-idea, to include poetry in the exhibit,” recounts Baker. The poem closes with the evocative lines “The rev of red cannot be sustained/ But please, scatter her berries throughout my day.”

“I thought it would be great to combine poetry and the visual arts,” says Baker, who enlisted artist and educator Maurice Lapp to juror the visual works. The accompanying poems were selected by a trio of local poetry bigwigs: Sonoma County Poet Laureate Don Emblen, Healdsburg Literary Laureate Doug Stout, and California Poet in the Schools Arthur Dawson.

“I love the juxtaposition of artful words and visual art. Each can obviously stand alone, and yet the mere proximity of one to the other changes each of them,” says poet La Montagne. “In this situation, the artists and poets had no contact before the event, so the pairings are totally random, which promises to yield serendipitous results. Having these two art forms together gives us new doorways to both.”

A longtime art teacher at Santa Rosa Junior College and a lifelong artist, juror Lapp applied simple criteria to the 57 works he admitted into the exhibit–works whittled from over 300 slides sent in by artists across the state.

“I think you have to evaluate a show based on the form, content, emotional feeling, tone, and the expressive quality of the work in question,” says Lapp, whose paintings have been shown in such prestigious art centers as San Francisco’s De Young Museum and New York’s Whitney Museum.

“Without good form you don’t have anything–just something that’s illustrative or merely factual,” he continues. “What we’re after is something that is what one could call ‘something approaching art.’ If we call it art, it has to have coherent form and communicate an emotion.”

Lapp was also careful not to let the show’s theme cloud the process of evaluation.

“Though the title involved the color red, in judging the show I decided I was not going to be overwhelmed by a profusion of red,” he explains. “That’s not what made the works engaging. Red had to be used in a way that gave the work function and meaning.”

As an example of what he was looking for, he cites Budapest 56, by Edgar Haris. The piece is a sculpture of “a tall wreck of a building” in Budapest that uses no red at all, but rather makes a sly political allusion to the color by suggesting its subject was damaged by the Red Menace.

“As a color, red has a lot of impact. It’s a highly saturated chroma and often used as an accent or as a large statement in and of itself,” says Robert Rice, the Arts Council’s education coordinator. “Red has so many hues or variations, from the coolest cool to the warmest warm. You will see a lot of that in this show.”

ONE CAN ALSO expect to see how younger artists have interpreted the color–often as a woeful reference to the violence that shapes their world.

“Many of the youth submissions are laced with images of violence. Collectively they are a screaming indictment of our society,” says La Montagne. “I had no idea when I embarked on this project that red was banned in some schools because of its gang affiliations.”

“Seeing RED” has also proven to be a transformative phenomenon for several of the more “marginalized” artists whose work was selected, including a Vietnam vet who credits the exhibit with turning his life around.

“The exhibit is really inclusive, and I like that,” says Baker, who plans to continue combining art forms at the gallery–a notion La Montagne applauds.

“Poetry and visual art are like singing and dancing–and sometimes I’m not sure which one is which,” she says “Many poets also make visual art, and the reverse is also true. I used to watch folks at art galleries and museums wearing those headsets and wish they were broadcasting their thoughts about what they were seeing and sensing to somewhere that I could tune in. The ‘Seeing RED’ exhibit is a variation on that theme.”

She continues, “I want more joint events where words and watercolors, poetry and pastels, simile and sculpture can swim in the same pond. The more modes of expression the better. Nothing but good can come of it.”