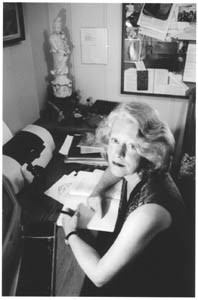 Writing Down the Bones: Her colleagues at Sixteen Rivers Press laud poet Lynn Trombetta for her craft and form.

I say that my manuscript is a hodgepodge, but everybody disagrees with me,” says Lynn Trombetta of her upcoming book. The members of the publishing collective Sixteen Rivers Press did not, apparently, share her sentiments. Their unanimous enthusiasm has led to Trombetta becoming the first new poet to join the seven founding members of the press, a nonprofit Bay Area poetry collective formed to provide a hands-on approach to publishing for San Francisco Bay Area writers. Founded in 1999 by seven women writers, the press is named for the 16 rivers that flow into San Francisco Bay.

The group’s members come from all over the Bay Area–Berkeley, Marin, San Francisco–and Trombetta will be joining Petaluma poet and poetry teacher Terry Ehret as Sonoma County’s second member. In 2001, Ehret’s Translations from the Human Language was one of the press’ two flagship books to be published.

Trombetta’s initial involvement with Sixteen Rivers Press came through Ehret. “She has another book out called Lost Body, which I love, and so I would go to readings whenever she would read, and I took a couple classes from her,” Trombetta says.

It turned out that Ehret was likewise an admirer of Trombetta’s writing. “I’d been watching Lynn’s work probably as long as she’d been watching mine, and watching her manuscript take shape as well,” Ehret recalls. Knowing that Sixteen Rivers would be looking for new manuscripts, Ehret suggested that Trombetta submit hers. “There was a kind of sensibility that Lynn has that I knew would suit what we were trying to do as a collective, which was really a different, very noncompetitive approach to publishing that runs entirely contrary to the way the publishing world works.”

“I heard that Sixteen Rivers was having a call for submissions,” says Trombetta, “and I thought, ‘Oh, [my manuscript] won’t have a chance,’ but I sent it in anyway, and, lo and behold, they liked it. And here I am, part of the press.”

Being a member of the collective is not so simple, though. Members put in an initial cash investment and make a commitment of three years with the collective, handling the unglamorous nuts-and-bolts tasks of running the publishing company. Every member of the press has her own role in designing books, dealing with distributors and printers, booking readings, and keeping track of finances.

“It is a big deal,” Trombetta says. “I’m sort of amazed at how much work is involved. I come to the meeting, and we all have our tasks that we divide up. I never realized all this stuff. It’s very educational and startling to me. You think you’d send your work off to the publisher, and they do all of the work.”

Selected from eight finalists, Trombetta proved an easy fit for the other members of the press. “I and a number of other people sort of scouted Lynn,” Ehret recalls. “I didn’t know that the group would have such a unanimous response to her work, because having seen the manuscript previously, I had to step out of the decision-making process. I watched as we had our first meeting to discuss [Lynn’s] manuscript. Once I realized that the group felt so strongly, I got to stand back and watch them fall in love with Lynn’s work.

“She’s just a very fine poet, very knowledgeable–intuitively or intellectually, or a combination of the two–about craft and form, and it just shows in her work.”

Trombetta came into writing later in life. She’s only been writing poetry for about 10 years, only a third of the time she’s lived on a former dairy farm, up on a hill overlooking Santa Rosa’s Bennett Valley, with her husband, Mark. “I came to [poetry] when my life was sort of falling apart, which is what a lot of people do,” Trombetta explains.

Through writing classes at Santa Rosa’s Angela Center, Trombetta says, “I just started trying to write poetry, and I found it really, really difficult, but challenging and pleasurable, trying to get an accuracy with the language and an accuracy with the emotion.” Now Trombetta herself teaches poetry at the Angela Center, and her poem “Portal, Dark Body, Song,” included in her book, has just been nominated for a Pushcart Prize by the editors of the poetry journal Runes.

Trombetta is still pondering over what to title her book, though she has been collecting possibilities. “I laid a bunch of them on the table and walked by them for a couple of days. It’s really kind of exciting–but frightening too–and wonderful.”

Sixteen Rivers has been forging an identity for itself over the past three years, but the collective’s roots go much further into the past. “There was a group of us that had met originally at the Napa Writer’s Conference in 1981 or ’82,” Ehret relates. “We would get together once a quarter and spend a day writing, because none of us could afford to go to writing conferences. That was the group that eventually evolved into Sixteen Rivers Press.

The entire press meets once a month for three or four hours to discuss business matters; once or twice a month, other members will meet for a work day. The distance between members makes it difficult to meet more often, Ehret says. “We do a lot of e-mail and take care of matters that way, so we’re kind of a virtual press. We don’t have an office, we don’t have a warehouse, we don’t have a literal press. We’re sort of a cottage industry.”

Inviting new members to join is inherent in keeping the membership of the press vital and fresh. “We want to bring in two new members a year, and the idea is there’s an option for two of the founding members to say, ‘Good luck, I’m going to move up to the advisory board,'” Ehret says. “I think those of us who founded the press will probably stick around for a while, but it’s going to change.

“What was really important for us–it took us almost the first three years–was really to figure out who we are and to take each step. Every meeting, we’d end up having to deal with [it], because every decision we made was going to define, in a sense, who we are.

“It was a very slow evolution, but those who come to the press will bring a different vision. We’d like to draw on different voices and, eventually, different ethnicities, generations, cultural backgrounds–genders. I would love to see men in the group.”

None of the members came to the press with any experience in business. In their case, it might have been a plus, as the collective then didn’t have any expectations to shatter or bad habits to shed.

“Every meeting, I’m amazed at getting all of this stuff done,” Trombetta says. “Everybody has their jobs, and they do them. If somebody gets overwhelmed, they say, ‘I need help,’ and people step up to it.”

Trombetta didn’t read much poetry until she began to write it, though now, she says, it’s “practically all I read. I always thought it was something very esoteric and foreign and that I could never, ever do it. A lot of the poems I had read in high school were sort of stodgy, not contemporary poems. I was an English major, and I did love certain poets, but I always thought, ‘Well, they’re so superior.’ I think a lot of people think that way about poetry–that it’s another universe that they don’t belong in.

“Poetry is sneaking into places that it hadn’t gone before, and I think 9-11 had something to do with that. It seems like the country’s having a nervous breakdown, and whenever that happens, you go to art, or you go to the poem for consolation or some sort of answer. Our culture doesn’t have a place for emotion. Billy Collins and Robert Hass were at the Luther Burbank Center, and 1,000 people came and seemed to really enjoy themselves.”

Rumors have been flying about the fate of the Old Vic, an English-style pub on Fourth Street in downtown Santa Rosa. Old Vic co-owner Chris Stokeld said that the building’s owners, the trust Kristians & Langendorf, were denying a renewal of their expired lease to make room for what is reputedly a new brewpub venture by the Russian River Brewing Company, which brewer Vinnie Cilzuro and his wife Natalie purchased from Korbel Champagne Cellars last October.

Bill Hillendell from Empire Property Services, who manages the building, was unable to confirm the news. “There’s no ink on paper at this point,” he says.

Chris and Maude Stokeld have been running the Old Vic for 14 years, and Chris Stokeld wasn’t too happy to hear from their landlords that they have to leave. “$50,000 a year I’ve given them, and they’ve told me to piss off,” he says. The Vic’s last day will be March 31. The Stokelds are currently scouting for a new location, possibly in Santa Rosa, Healdsburg, or Sonoma.

Fellow tenant the Last Record Store is facing difficulty with the same landlord. “Our lease has expired, but in November we had a really bad roof leak, and the landlord delayed fixing it until the lease expired,” says Last Record Store co-owner Doug Jayne. “Now he’s saying that we should have done it. He’s looking for a new tenant, even though we’ve been here for 20 years. We’re on a month-to-month [lease]. If we try to call him up and negotiate, he says no. But someone else can call him up, and he’ll talk to them.”

It Takes a Gingerbread Village