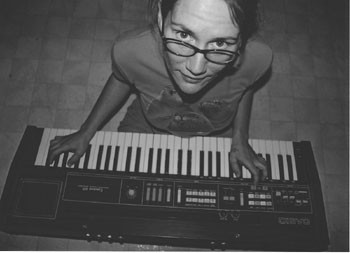 Cottage Industry: Karry Walker set up a studio in her bedroom and worked for over a year honing the sound for her new album.

Before the Maybelline Years

Karry Walker spent a year constructing a miniature sonic wonderland in her house, and when she was done, she wasn’t Karry Walker anymore– she was Ultralash.

Ultralash is the name of Walker’s new project, and it’s also the name of her first album since her 1999 debut, Lipsbury Pinfold. Those familiar with the Karry Walker of Lipsbury will still see some of the old Karry Walker in Ultralash–the singer-songwriter whose voice glimmers over songs tinted with electric ambiance–but there’s something new, a door opened or a lock busted off, that’s happened to Walker’s musical sensibility since then.

Ultralash is an exquisite collection of gently tweaked-out songs which, in their subtle way, begin to burrow under your skin with the first listen. It’s like an audio collage of an old photo album that was found in someone’s trash, with random tidbits from a handful of stranger’s lives.

Almost all of Ultralash was recorded in Walker’s home–she lived in Petaluma at the time–and it has that kind of deep bedroom sound to it, quiet and small and full of spooky noises.

“It took a year, a year and a half to do everything. I spent a lot of time writing and abandoning stuff. After the third song that I recorded, I realized that I was going in a direction soundwise, and I felt like I had dialed it in. I just totally took off after that; I was doing a lot of writing.”

Ultralash owes a lot of its character to Walker’s use of a small, ugly brown organ called an Optigan that spins clear, floppy plastic disks–about the size of an LP–which are optically encoded with looped, live recordings of real instruments. “It’s the first actual mechanical sampler ever made, and I got it from somebody who found it at the dump for $5,” Walker says. “It was made in 1970 as a toy organ, with a ‘Fun for the whole family!’ kind of image.”

By putting the disks upside down or playing them backwards, it’s possible to make a ghostly, proto-electronica backdrop with a frayed, dusty-attic sound. From the initial beats of Ultralash‘s opening track, “Kitchen Song,” Walker cleverly plants snippets of the Optigan throughout the album.

Lipsbury Pinfold came out on San Francisco’s Ubiquity Records and met with critical success, but it was not as out-there as the rougher, more pared-down new songs that Walker brought the label next.

After Lipsbury, Walker continued to work with Paul Scriver, the album’s producer. Walker’s post-Lipsbury demos with Scriver pleased neither Walker nor Ubiquity, who didn’t care for her noisier direction. Walker, meanwhile, thought the demos were “real poppy and just sort of Starbucks.” So Walker and Ubiquity parted ways.

“Their label is focused mostly toward real slick kind of dance stuff,” Walker says. “I was their first songwriter. They did a lot for me, but when I sent them the demo of the stuff that I did with Paul, they didn’t like it. We both agreed that it probably wouldn’t be a good idea for them to do the next record, and so I left.” Walker more or less abandoned the recordings she had done with Scriver, although she did wind up sampling some key sections, including a swirling psychedelic orchestral buildup on “Flying Colors.”

With her home studio, Walker didn’t need to worry about financing studio time, but once she had recorded all of Ultralash, she needed someone to mix the record for her. “I’m not an engineer,” she says. “I sent tracks on a lark to Roger Moutenot, who’s done Yo La Tengo and Sleater-Kinney . . . and he loved it. He called me and said, ‘What do you want to do?’ I said, ‘I want you to help me with this.'”

Walker flew to Nashville to mix down the record with Moutenot and formed an association that led Walker to her new label, Fictitious Records. “[Moutenot] told me that he was starting his own label for musicians that he felt really strongly about, and he asked me if I wanted to put it out on Fictitious. It’s real small, a little bedroom operation, financed by him–kind of a labor of love.”

At this point, Walker decided to switch to the moniker Ultralash. “I got kind of tired of being Karry Walker,” she says, “and that’s part of the whole change too, and realizing the possibilities in recording and becoming more of a producer. I’m just having a blast making music, and I want it to go into any direction that it wants to go. As a singer-songwriter, I felt really confined, and I decided to open it up a little bit.”

Walker’s participation in the Immersion Composition Society, a renegade group of avant-gardish musicians based in Oakland, played a large role in expanding Walker’s outlook as a songwriter. The collective of speed composers spend a day every two weeks independently pounding out as many songs as possible, and later that evening they meet up for listening parties to hear the day’s output. “We do our best to write as many songs as possible that day: write, track, record, and mix sound,” Walker says. “They’re not necessarily songs; they’re compositions. Sometimes it’s just three seconds of ‘Waaaaaaaaa!’ There’s a lot of crap, but some of it is really cool. Two of the songs on Ultralash are Immersion compositions. ‘Cabernet’ I wrote in 45 minutes.”

“Cabernet,” a song that trembles like a baby bunny in your hand, has a slip of a backwards-skipping record wash in the background (the Optigan again) against Walker’s enchantingly offhand lyrics, delivered in a soft singsong warble (“If you made a meal of me, / I’d taste like Brie and Cabernet Sauvignon”). It’s those 45 minutes out of Walker’s life frozen like a slide to be projected on the wall, a song that would have been destroyed in the scrutiny of more traditional songwriting.

What does Walker mean by Ultralash, anyway? The phrase pops up in “Flying Colors,” a song Walker wrote about a girl she’d see around Petaluma. “What I think of as perfectly ultralash is this girl that was riding right in front of my house–about 13, 12–and she was riding this lowrider bike that she had to sit way back on. It had a banana seat, and she was way too big for this bike. She had really pale skin and freckles and red hair that was streaming behind her.

“She was in this place in her life that I look back and remember as that place right when you’re standing on that precipice of becoming really, really self-conscious and worried about boys and makeup and you’re not happy inside your body. For me that happened around 10 years old, and before, I wasn’t like that; I was more like a boy. That’s that tender age that I call ultralash, as opposed to Maybelline–that’s when you start worrying about all that stuff, and you start doubting your own abilities and what you are supposed to be doing as a girl. Before that, you’re more like a supergirl.

“My mother was ultralash. She’s a professional golfer now. She was able to maintain that spirit without getting caught up in what people thought about her.” Walker shows me a black-and-white photo: a little girl in cowboy boots and hat, toy gun in hand, pointed straight at the camera. The girl is Walker’s mother, who taught her to play the guitar.

There’s more than bit of ultralash in Walker too. “I’ve always been a solo artist. It’s a control issue,” she laughs. “When I write something, I hear all of the parts.

“I’m just really grateful that I’ve had people that are willing to give me money to make a record or at least put it out. And I don’t mind working day jobs as long as I can do what I do and not have anybody else tell me what to do.”