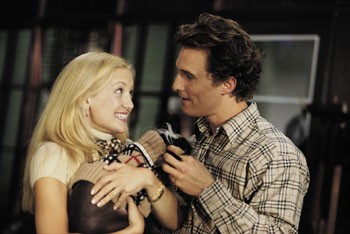 Boo-Boo Face: Kate Hudson consciously breaks all the rules in an attempt to drive Matthew McConaughey away.

A comic discusses women, nicknames, and ‘How to Lose a Guy in 10 Days’

He’s just seen How to Lose a Guy in 10 Days, the new romantic comedy (read: chick flick) starring Matthew McConaughey and Kate Hudson. It’s about a bachelor (McConaughey) who, having bet his boss he can stay with any one woman for 10 days, unknowingly chooses the sexy writer (Hudson) whose latest assignment is to land a man and then scare him off by making all the classic mistakes–such bad moves as calling him her boyfriend on their second date, publicly chattering in high-decibel baby talk, and brazenly loading his medicine chest with tampons and (Jesus Christ!) vaginal creams.

In short, it’s the kind of movie that Friedman–and about a million other guys–would normally endeavor to stay at least 15,000 miles away from.

Which is precisely why Friedman, a Los Angeles-based writer and standup comic, is currently dying–of embarrassment. He’s been forced to admit that How to Lose a Guy was, damn it, kind of good.

“I hate myself for saying it,” says Friedman, “but it wasn’t nearly as hateful as I was prepared for, not nearly as despicable as I’d expected, and not nearly as lame as it could have been. It was smart and funny, kind of a modern miracle–a chick flick that won’t offend guys.”

Friedman, a staple of the L.A. comedy-club scene, is an award-winning syndicated columnist, a longtime writer of television comedies, and the author of two books: Road Comic: Heartbreak, Triumph and Obsession on the Comedy Circuit and Chasing Rainbows. The first is an autobiographical behind-the-scenes romp through the seedy hotels and comedy clubs that are a comic’s daily existence.

The second–the Rainbow book–is a big, expensively produced coffee-table job devoted to Friedman’s other, somewhat less likely obsession: American Indian blankets. He’s so filled with enthusiasm for the woven wonders that he keeps slipping little Indian-blanket remarks into his conversations.

It’s cute. Not unlike the way Kate Hudson keeps introducing the phrase “Boo-Boo Face” when addressing McConaughey in front of his buddies. In offering his chief criticisms of How to Lose a Guy, Friedman excitedly states, “Did you notice there wasn’t a single Indian blanket in the whole movie? Not a hint of a blanket draped over McConaughey’s furniture.

“On an Indian-blanket basis,” he adds, “this movie was a total failure.”

As for the film’s many insights into male-female relationships, Friedman was impressed by the hellish laundry list of assaults that Hudson deploys in trying to lose her guy. On the other hand, this is Kate Hudson, the very picture of adorable sexiness. Would any display of boo-boo talk or spontaneous weeping be enough to make a guy toss a hottie like Kate Hudson out of bed?

“The Celine Dion concert would have done it for me,” says Friedman. He’s referencing a scene in which Hudson tricks McConaughey into going to a Celine concert. Another funny moment comes when McConaughey realizes she’s given his penis a nickname: Princess Sophia.

“Not a name any guy wants his penis to have,” Friedman laughs. “And I know a lot of guys who’ve nicknamed their penises. A penis without a name is a very lonely penis. I have one friend who calls his ‘Mr. Hollywood.’ Best penis name I’ve ever heard.”

And what’s the worst penis name he could imagine?

“Other than ‘Princess Sophia?'” Friedman laughs. “How about ‘Celine Dion?’ Now that would be a lonely penis.”