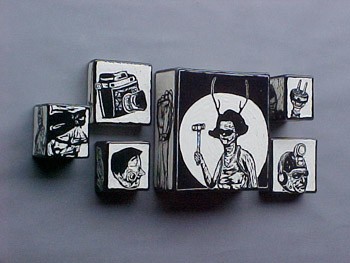 A show at Roshambo highlights a world in chaos

There’s a world in Todd Barricklow’s head, and he’s slowly transferring it to clay.

It’s a righteous world, a bit of a Robin Hood world. The images, once channeled from head to clay, tell the tale of a group of people Barricklow calls the cleaning bandits–masked men whose mission it is to sweep up corruption, whisk away dirty business. Told in fleeting glimpses in stark black and white, the story unfolds on tiles and rectangular blocks, digestible as a whole or in part: a ladder, an old telephone, a woman with horns.

The cleaning bandits are a metaphor for reform, Barricklow allows, though he says that the length and breadth of the story isn’t something he talks about a lot. “They’re fighting the revolution in their little world,” he says, racing around his Cotati studio.

It’s not necessary to understand the story to appreciate the images. It’s a world born from our fast-moving, high-tech culture, with a touch of paranoia; instruments of surveillance, like cameras and telephones, are prevalent.

The white clay is rolled out into sheets or formed into blocks. Barricklow then paints these with liquid black clay and scrapes the black clay away–like you would a wood block–until the image appears. He’s been working on this series for about a year and a half.

Art is what got Barricklow through high school in the San Fernando Valley, and the bucolic scenery and the ceramics department are what beckoned him to Sonoma State University. “It was a dream,” he smiles.

He can’t imagine working in another medium, for now at least. “I’ve gotten so used to thinking backwards,” he says in reference to the reductive method of his work. “Somehow I’m in this little mental process where I don’t like the way my work looks if I draw it on white paper.” The transformative process–the scraping, the firing, the glazing–tugs at Barricklow’s imagination. “I tried doing wood blocks, but you’re fighting the grain. Linoleum also. When I carve it, it’s so effortless in the clay.”

Barricklow honed his craft at an artist-in-residence program at the Kohler company (of toilet and sink fame). Kohler brings artists into the factory, he explains, and lets them have free use of all the facilities–clay, clay, and more clay. Plus glazes. The experience had a strong effect on Barricklow’s method, because the materials were so different. Kohler glazes were milky and turned his bright colors into pastels, so he switched to black on white.

The method works with his imagery; the cleaning bandits have a fairly strong strain of Luddite in them. Barricklow explains it as “just me trying to go the opposite way of life. Bigger, brighter, better televisions, with how many hundreds of colors? I just want to press the button that says black and white.”

Will Smith, with whom Barricklow shares wall space at Roshambo starting March 1, presses a few more color buttons. “My philosophy is to have a bit of sugar with your medicine. I use color to draw you in.” Smith, who teaches at Santa Rosa Junior College and SSU in the printmaking and drawing departments, illustrates his work with bright, candy colors. “Dark colors would be overkill,” he says.

Certainly, there’s an aspect of the grotesque in Smith’s work that’s brought alive by his use of color. “Directly, the images come from my immediate environment,” he says. “There are birdhouses on the property I live on–sheep, chicks, wild turkeys.” There’s nothing bucolic about the end result, however, after the images have traveled from eye through mind to paper. Bulbous-nosed floating heads and cartoonish ducks populate Smith’s busy canvases, a bright, dystopian world.

“Pretty much any medium goes,” he says. “I just kind of grab what’s there and what’s the right color, anything from watercolor to ballpoint pen, India ink, coffee stains–it’s all fair game.”

Interpretation is fair game too. Smith describes the world depicted in his drawings as “disillusioned characters running around bumping into each other, basically surviving.”

Work by Todd Barricklow and Will Smith will be on display at Roshambo Winery and Gallery from March 8 through April 30. Reception: March 8, 5-8pm. Barricklow and Smith will also be selling T-shirts, pint glasses, and Shrinky Dinks of their work. 3000 Westside Road, Healdsburg. 888.525.WINE or www.winery.cc.