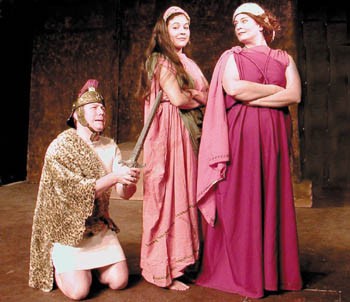 the ‘Lysistrata’ script by Aristophanes.

People tend to think of classical literature–especially 2,400-year-old plays–as precious and stodgy. Blame it on high school English classes of yore. So when Sonoma County Repertory Theatre’s Lysistrata packs in as many wee-wee jokes as a John Hughes movie, it comes across as either a lowbrow revelation or a violation of good taste. Or both. In any case, Lysistrata elicits some chuckles and will probably spark a few heated debates about the nature of the sexes.

Set in Athens, 411 B.C., Lysistrata sees its eponymous heroine putting her foot down when it comes to putting out. She’s sick of all the men being gone for months at a time fighting the Peloponnesian War, a 20-year battle between the city-states of Athens and Sparta. After gathering together both Spartan and Athenian women, Lysistrata proposes a sex strike: no booty calls until the men’s warlike booty kicking stops. It’s an exercise that tests the willpower of both sexes, and therein lies most of the play’s humor.

Despite the antiwar theme, the core of the conflict boils down to gender issues. It’s also more of a screwball comedy in nature than it is a hard-nosed condemnation of war. Director Jim dePriest’s vision of Lysistrata remains faithful to the original script, except for the amusing deviation in a battle between the Chorus of Old Men and the Chorus of Old Women that’s choreographed in exaggerated slow-mo to Edwin Starr’s “War.”

Rife as the script is with stiff phrases like “pray, do tell,” it’s clear that the comedy nuggets of the play are stiffy puns–visual and verbal. Back in Aristophanes’ day, the actors wore strap-on phalluses to emphasize their masculinity, and dePriest retains this aspect in the plays’ most outrageous aspect. There’s no getting around the fact that gigantic erections are consistent crowd pleasers.

Lead Sandra Ish-Albini plays a strong Lysistrata–even her profile has a classical Greek look. Sara Hernandez’s alluring and sweet-faced Myrrhine and Jonathan Graham as her warrior husband Cinesias, who gets some major dick teasing from his coy, protesting wife, both hit a gratifying comic stride.

The remainder of the cast give competent but not shimmering performances. Some potentially hilarious lines pass by without notice. But the pace is brisk, and the jokes are scattered enough to keep the action interesting. Jerrie Patterson’s costume design–a foolish stocking cap for the most crotchety of the old men and a pouffy blonde wig for Lampito, who likes to embrace her ditzy, feminine side–ably sends out visual clues.

SCR’s Lysistrata coincides with the Lysistrata Project, which will stage worldwide readings of the play on March 3 as a show of opposition to the prospect of war in Iraq. Continuing with their “Talk Back” sessions begun after last season’s Spinning into Butter, SCR will host postplay discussions facilitated by guest panelists from antiwar groups.

It’s interesting to note that in Lysistrata, Aristophanes didn’t so much write an antiwar comedy (though the play is indeed that) as he did an examination of gender. Women were hardly looked upon very highly in Greek society, and in Lysistrata he gives them a strong and intelligent voice.

The question still remains, though: Could a sex strike really put an end to war? Feather-light Lysistrata posits no answers, but it does raise some weighty issues.