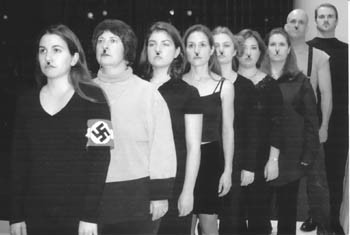 Youth Brigade: ‘Krank!’ takes its inspiration from the music of Kurt Weill and Brechtian ideas of time and space.

Kurt Weill claimed that he “didn’t give a damn about writing for posterity,” but 53 years after his death the musical-theatrical works of this son of a Jewish cantor live on.

“I think that Weill’s music is beautiful and timeless,” says Lynne Morrow, assistant professor of music at Sonoma State University, which is preparing to stage an ambitious new musical revue of Weill’s work titled Krank! “The harmonic changes are chromatic and quirky, which makes it very interesting for musicians. The fact that he was famous and well-received in Germany, was forced out [by the Nazis], and then immediately well-received in the States is pretty phenomenal. I mean, to work with [lyricist] Bertolt Brecht and then Ira Gershwin and Langston Hughes. Brilliant!”

Krank! (which means “sick” in German) is the brainchild of Morrow, the director of the university’s opera/music theater programs, and stage director Amanda McTigue. The production, which previews on Feb. 27, draws from works throughout Weill’s career and explores what Morrow calls “today’s search for salvation and redemption in a troubled world.”

“Amanda has chosen, because of a tiny budget and her brilliance, a Brechtian approach that includes no set, but employs many props and lots of interesting uses of light and multimedia,” Morrow explains. “There will be screen projections, supertitles, lots of light changes, and live and recorded music.”

There’s no question that Weill’s songs continue to inspire artists. In the ’50s, Louis Armstrong and Bobby Darin both scored hits with their renditions of “Mack the Knife,” perhaps Weill’s best-known composition, and the Doors famously covered Weill’s Teutonic “Alabama Song/Whiskey Bar.”

Weill, born in 1900, began his career in the early 1920s. He was deeply influenced by Stravinsky and committed to the notion that music is a social force. Weill soon rediscovered such tonal and vernacular elements as jazz, which he used in his cantata Der Neue Orpheus (The New Orpheus) and the early one-act stage piece Royal Palace. These were written between two operatic collaborations with the renowned German expressionist playwright Georg Kaiser: Der Protagonist and Der Zar Läßt Sich Photographieren (The Czar Has His Photograph Taken).

By the time Der Protagonist was performed in 1926 (the same year he married Lenya), Weill was already an established young composer. But he had decided to devote himself to the musical theater, and his works with Brecht soon made him famous throughout Europe. He fled Germany in 1933 and moved to Paris, where he worked with Brecht again on the sung ballet Die Sieben Todsünden (The Seven Deadly Sins). Two years later, he settled in the United States.

Weill died of heart failure in 1950. In his obituary, he was identified by Virgil Thomson as “the most original single workman in the whole musical theater, internationally considered, during the last quarter century. . . . Every work was a new model, a new shape, a new solution to dramatic problems.”

“One of the quotes used in the show is, ‘If there is evil in the world, we have agreed to it.’ Amanda and I really believe that,” she says. “But, we also believe that there is hope in the world. And that hope is our connection to each other.”