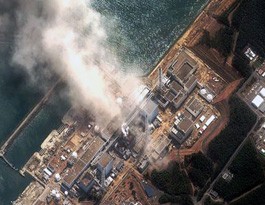 The nuclear disaster in Japan has shaken the world and changed the dialogue about nuclear power development everywhere.

The Christian Science Monitor last week reported, “Germany’s Chancellor Angela Merkel, capturing the public mood as Europeans watch the tops blown off of reactors at the Fukushima Daiichi nuclear power plant, calls the disaster ‘a turning point in the history of technology-based society.'” The Monitor also noted, “Europe is the most nuclearized zone on the planet, with 143 reactors and eight more under construction.” Elsewhere, the German press reported that Merkel, enacting a three-month moratorium on older plants, shut down seven nuclear reactors.

Obama seems only to have shut down his heart and mind. Even after Japan’s horrific disaster, the president continues to believe nuclear power is sustainable (a fantasy equivalent to the Orwellian “clean coal”). Energy Secretary Steven Chu says Obama is still budgeting $36 billion to guarantee loans for new reactor projects, according to an ABC report of March 16.

Only last month we reported here about lingering devastation caused by the Chernobyl nuclear meltdown 25 years ago, currently documented by photographer Gerd Ludwig to bring attention to the damages and suffering caused by nuclear meltdown (“Chasing Chernobyl,” Feb. 9). Human tragedies can be conveniently overlooked by nuclear proponents, who claim that reactors can be made safe. The problem is that the movement of earth’s crust cannot be accurately predicted. And it certainly cannot be controlled. Japan has a legacy of superior design and technology, but no technology can stop the seismic eruptions that occur along the so-called Ring of Fire that frames the Pacific Ocean. This is an earthquake zone.

The pro-environment group Greenpeace is among the organizations taking an anti-nuclear stand. On its website can be found the scraps of poignant evidence arguing for a more humane alternative to nuclear power—from personal memorabilia to live feeds of radiation levels over Japan. Nuclear energy, like pesticide, is a profit-making re-application of a weapon developed for war. Japan is one country that will never forget that.

“Despite what the nuclear industry tells us,” states Greenpeace, “building enough nuclear power stations to make a meaningful reduction in greenhouse gas emissions would cost trillions of dollars, create tens of thousands of tons of lethal high-level radioactive waste, contribute to further proliferation of nuclear weapons materials and result in a Chernobyl-scale accident once every decade.”

Spikes in radiation levels at the Fukushima Daiichi plant prompted Emperor Akihito’s first public message after the disaster. According to a BBC report, Akihito is “praying for his people [and] concerned about the nuclear situation because it is unpredictable.”

Let’s hope Obama does the same.