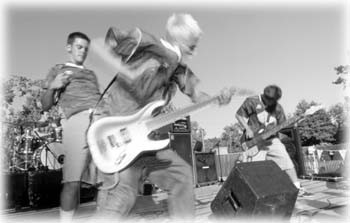 Blur of Action: Straightedge rockers Simon Says pump it up in soccer gear and on Gatorade.

THE WORDS SPILL from Zac Diebels’ mouth in a steady, unstoppable torrent; a happy, verbal reservoir of chatter undammed by the merest hint of a question from this end of the telephone.

“Yeah, yeah, we’re all traditionally trained musicians, meaning we took lessons, a lot of lessons, we’ve studied all kinds of styles of music, jazz, Spanish, and whatnot, beyond what we play on stage, which is really heavy rock with melodic vocals and whatnot, we don’t scream all the time, though there is screaming but there’s a lot of actual singing too, good singing, and it’s aggressive, aggressive music, one solid, unified rhythm, attacking you! Attacking,” he repeats with evident satisfaction, “your ears.”

And that is how lead guitarist Diebels, 20–were he faced with a yet-to-be-initiated listener–would describe the sound of the Simon Says, the hardworking, super-hot, confidently eccentric, soccer-suited, Sacramento-based foursome that–according to the band’s dedicated manager, James Craig–have sold an astounding 3,400 copies of their last self-produced CD–Little Boy. Sold primarily at concerts (they tour constantly) and through their diligently maintained Website (www.digimag.com), Little Boy is adding to Simon Says’ following at every venue, making it one of the fastest growing independent-label bands around.

And if you think Diebels and Co. are enthusiastic on the telephone, you should see the band onstage.

“We aim to be the most live band you’ll ever encounter,” he explains. “Our energy level is like nothing you’ve ever seen!” Indeed. Reports are numerous of previously sedate audiences (mostly 14- to 22-year-olds) stimulated to the point of exhaustion, with the random attendee actually passing out, as the crowd is swept up into a sweaty frenzy of wild, excited bouncing as soon as Simon Says hits the stage.

“We bounce,” admits Diebels. “Especially Matt [Matt Franks, the band’s lead singer]. “Loud music gets him really pumped up. Pretty soon everybody’s bouncing.” One reviewer went so far as to suggest that the band must have had kangaroos in their genetic mix.

“People come up sometimes and say, ‘Man! What are you guys on?'” he laughs. “Then we show them what we’re drinking.”

Which happens to be Gatorade.

Which brings us to another factor that separates Simon Says from the rest of the hard-rock pack: they don’t drink. Neither Diebels nor drummer Mike Johnston nor Bass player Mike Arietta nor singer Matt Franks. Don’t drink, won’t drink, wouldn’t want to. No drugs either. And no off-color language, giving a squeaky clean center to the raw, pumped-up pyrotechnics of their music.

Simon Says is “straightedge.” Out on the fringes of the hardcore music scene, straightedge has been an athletic alternative to alternative rock since ever Ian McKay, with his seminal ’80s band Minor Threat, launched a short spurt of clean-and-sober punk bands. The influence of McKay, better known as the vocalist/founder of the poetic hardcore group Fugazi, is only indirectly represented in today’s straightedge bands, most of which fall into the Christian Contemporary category (where cleanliness is a byproduct of godliness) or secular bands that just happen to be militant crusaders against drugs and alcohol.

Simon Says, says Diebels, stands outside of both categories, edging closer to McKay’s brand of straightedge than their modern-day musical cousins.

“We don’t preach,” he insists. “Our lyrics are not about staying away from drugs and alcohol, but about everyday stuff that people our age can identify with. Most people don’t even know we’re straightedge; they just think we’re regular guys who like to play loud music. And that’s cool.

“We choose not to do drugs, but we don’t say you can’t choose something else. We’ll play in bars, for instance, where some of the other straightedge bands wouldn’t, and they don’t think that we should, and that’s cool too.”

“It’s about influence,” he says. “We know the influence a band can have over the kids who are out in the audience. If Eddie Vedder says, ‘Down with the Republicans,’ kids will swallow it whole without thinking. We stand clear of trying to sway anyone with an overt message. If our off-stage example inspires someone to make a life choice, that’s cool. But we don’t exactly shoot for it.”

One unexpected benefit of their overtly non-verbal druglessness is the enthused endorsement of certain companies eager to have their products used and displayed by such wholesome, good-looking, and kick-ass popular musicians. Simon Says is officially endorsed by ESP Guitars, Pure Cushion Rims, and Umbro U.S.A., a major manufacturer of soccer wear.

Another of the band’s stand-apart eccentricities is their onstage getups, in which they resemble nothing so much as a crazed soccer team hired to stress-test a line of musical instruments.

“The clothes look good,” Diebels stands firm. “They appeal to us, they give us a certain athletic look, and they’re an antidote to the dingy stuff a lot of other bands wear.

“Besides,” he laughs, “the crowds really love it!” And come to think of it, with all that bouncy energy, these guys probably would make great soccer players. If only they had the spare time.