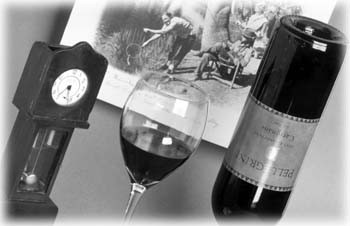 Mix Up: Exotic varietals have been lurking in bottles and vineyards for years. Your father just didn’t know it.

Strange stuff and other varietals

USED TO BE, the world was understandable because Walter Cronkite explained it for us. Order was our comfort: The Yankees appeared every year in the World Series, every morning began unfailingly with “Captain Kangaroo,” and our elders’ wine from California never involved more than cabernet, zinfandel, pinot noir, and chardonnay. If they wanted something exotic, a Gewürztraminer once a year more than sufficed. Maybe a Johannisberg riesling. Sebastiani’s barbera was bought on occasion, of course, just out of loyalty, but barbera was the only weird red.

When merlot first appeared as a separate varietal about 10 years ago, my father sniffed, “What’s this for? Merlot’s a junk blending wine.” He was a bank auditor, and I think merlot offended his sense that all things must fit into columns in order to be appreciated; merlot back then was like a note scribbled in the margin. Now Dad lives in New Hampshire, and it’s a good thing, too: The wine shelves here are loaded with strange stuff: viognier, mourvedre, pinot gris, grenache, syrah. It’s as if Ford manufactured Volvos, Ferraris, Yugos–and Fords.

In truth, strange stuff has been grown in California for decades. Sean Thackery, who specializes in odd, celestially named blends (“Orion,” “Pleiades”), has discovered a 70-year-old syrah vineyard in the Napa Valley, and Ted Bennett up at Navarro Vineyards in Mendocino County found 50-year-old head-pruned mourvedre in the Redwood Valley near Ukiah.

Before varietals began to take prominence at the upper end of the California wine market back in the 1960s, most of the strange stuff went into generic burgundy. We’ve been drinking mourvedre, grenache, carignane, and the like all along, we just didn’t know it.

Now a new generation of winemakers is taking these grapes on their own, sometimes with excellent results. At the very least, the snazzy, startling fruit of syrah provides welcome comedy after so much self-absorbed pinot noir; carignane’s salt-of-the-earth nobility is like drinking folk music; and grenache’s combination of Chanel No. 5 nose and redwood-tree flavor brings forth scenes of May Day frolics–not really a picture created by, say, BV Private Reserve. So let’s have more of these, please–and the usuals as well, of course.

Here are three wines from Sonoma County made from some of these eccentric-uncle grapes, rated on a four-star system (one star is drinkable, four stars unforgettable):

Jancis Robinson, editor of the authoritative Oxford Companion to Wine, calls carignane (known as carignan in France, carignano in Italy, and carinena in Spain) “the bane of the European wine industry” because its widespread planting crowded out nobler grape varieties, but I find the grape to produce, on most occasions, a worthwhile and drinkable red.

Pelligrini’s is typical: soft on the edges, fruity and slightly tannic in the center, and cedary in the nose–an ideal table wine in other words, not complex but otherwise full-flavored. Indeed, complexity misses carignane’s purpose. While vintners are naturally attracted to cabernet, chardonnay, pinot noir, and the other celebrity varietals, the wine industry would do well to make more carignane. The way to get more people to drink more wine is through $10-or-less daily quaffs, not $20 or $30 collectors’ bottles. Carignane is cheap but goes well with dozens of foods, from mild white cheeses to pasta to beef. Two and a half stars. $9.75.

This is 100 percent grenache–the world’s second-most planted grape variety, believe it or not. (First place is held by airen, a grape variety unknown in the United States but from which the Spaniards make most of their wine and all of their brandy.) A few years ago grenache became one of the darlings–mourvedre was another–of the “Rhône Rangers,” a posse of California winemakers led by Bonny Doon’s Randall Grahm and Joseph Phelps in Napa dedicated to the idea that California, with Rhône-clone soils and a more consistent climate, could produce better Rhône-style wines than could the Rhône Valley in France. I don’t know about that, but this Staley grenache is a well-balanced, well-made wine that I’d pair with pork or lamb because of the wine’s small center of fruit surrounded by satisfying dryness. Like the Pellegrini carignane, an excellent vino di tavola. Two and a half stars. $12.00.

In a blind tasting with my nose pinned, I’d guess this smooth beauty was zinfandel. It’s got zinfandel’s characteristic redwood forest/wildflower meadow argument going on. But the fresh-cut-hay nose gives it away as syrah, the grape known as shiraz in Australia and the basis for many fine Rhône wines in France. Like zinfandel, syrah–not to be confused with “petite sirah,” which is another, arguably inferior grape variety–seems to adapt well to whatever style its vintner desires. Most Australian shiraz is fruity and non-tannic, great wine for drinking now. Most French syrah Rhônes could age longer than you. I’m glad Christopher Creek held its ’93 syrah back: the tannins have softened a bit now, allowing a dark chocolate and raspberry combination to come through. The nose reminds me of eating barbecue after a day picking blackberries, all brambles and sweetness and smoke. This is great stuff. Three stars. $12.95.