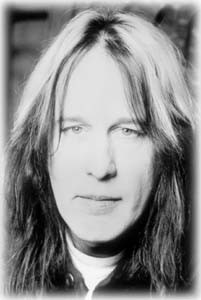 Todd Head: Is Todd God? Decide for yourself at his Mystic Theater concert.

IF YOU LISTEN REAL HARD you can hear a little piece of paradise–replete with tropical birds–echoing over the phone line from Hawaii as pop icon Todd Rundgren discusses his latest recording project and juggles domestic chores. “At this very moment I’m working on my–Rebop, Rebop, I’m on the phone!–Website, and obviously doing a little sitting at the same time,” he offers, gently nudging one of his tykes out of the room. “A little later this afternoon, I’ll be working on new material.”

That’s new song material, not for a CD but for his newly launched Internet subscription service called PatroNet that allows fans to download new tunes, music videos, remixes, and other items by the 50-year-old art-rock innovator.

“When you get to my, um, kind of stature–if you want to call it that–in the record industry,” says Rundgren, joking about his fading star, “you have to find new ways to reach your audience because the industry itself is not so oriented toward the ‘seasoned’ artist, they’re oriented towards new artists. You still have an audience, but no one’s making an attempt to reach them, so you might as well as go to them directly.”

It’s a lucrative arrangement. Rundgren estimates that he can turn a handsome profit from a mere 7,000 subscribers–a far cry from the 100,000 units he’d have to sell to keep a record label happy. But he hasn’t abandoned tradition altogether: On Sept. 23, Rundgren releases a new CD–With a Twist (Angel/Guardian), a kitschy lounge collection of such Rundgren hits as “Hello It’s Me,” “I Saw the Light,” and “Can We Still be Friends” that get the bossa nova treatment; and Rhino Records has just released a second anthology of Rundgren hits.

“Some people might see this lounge project as unusual, but this is not an unusual thing for me or the people I play with,” says Rundgren. “All of these trends that have recently become popular have long been guilty pleasures for us. We have the entire Yma Sumac catalog–on vinyl!,” he adds, referring to the multi-octave exotica diva. “We’re not being novel with this music; to a certain degree we’re being reverent within our capabilities.”

Diehard fans–who maintain several Websites to their idol, including one that polls Net surfers about the “Todd is God” debate–are no strangers to the musician’s frequent excursions on the fringes of pop. Rundgren, a Philadelphia native with a deft ability to mix Philly soul and psychedelia, began playing guitar as a teenager, fronting the legendary ’60s cult band the Nazz. In 1969, he recorded his solo debut Runt, which spawned the hit “We Gotta Get You a Woman.” But it was 1972’s brilliant Something/ Anything–a double album on which he played all the instruments, sang all the vocals, and produced all the tracks on three sides–that put Rundgren into the limelight.

Critics hailed him as the next Brian Wilson, but Rundgren proved even more eccentric than the moody Beach Boy. His follow-up album, 1973’s A Wizard, A True Star, reproduced an entire acid trip and is regarded as an art-rock triumph. Subsequent efforts were no less strange, though sometimes less successful–1974’s Todd is derided by the Rough Guide to Rock as “one of the dullest double albums ever made.” But over the years, Rundgren has displayed flashes of brilliance: 1976’s Faithful gave rise to the eight-minute opus “The Verb–to Love”; 1978’s Hermit of Mink Hollow was blessed with the pop sensibilities of “Can We Still Be Friends”; 1985’s A Cappella featured multitracked Rundgren vocals and catchy tunes; and 1989’s Nearly Human revisited the Philly-soul style.

Meanwhile, Rundgren produced a host of Beatle-esque cult hits for the likes of Patti Smith, the Psychedelic Furs, and XTC.

But it is his fascination with technology–and his willingness to forsake stardom in favor of innovation–that has set him apart. Rundgren, who produced the first two commercially released music videos, has an impressive list of landmark feats: first interactive TV concert broadcast live (1978); first music video to combine live action and computer graphics (1980); first graphics paint-box software for a computer (1982); and the first live national cablecast of a rock concert (1982).

He has continued to merge media and technology, performing engagingly alone on stage with a Macintosh computer, video camera, and synthesizer. In 1993, he released the first interactive CD-ROM project, No World Order, which allows the user to act as producer.

In 1995, he was honored with the prestigious Berkeley Lifetime Achievement Award from the Popular Culture Society at UC Berkeley. “I guess the common element in all of those projects is a certain sense of adventure, part of which is the disinclination to repeat things that I’ve done before or to do exactly what everyone else is doing, even if it happens to be something that I used to do and has suddenly become popular,” Rundgren says of his career. “I guess in that sense I am self-consciously alternative. It’s not because of an effort to satisfy an audience need; it’s my own need to hear and to experiment with things that are different or new to me; to constantly absorb new influences.

“Sometimes I absorb so many new influences that it seems to obliterate anything that I’ve done previously, but eventually it all gets merged together in some kind of stew and, ideally, comes out as recognizably me,” he says, adding with a laugh, “eventually.”