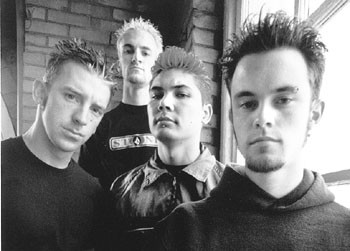 ON RECORD, Simon Says are raw, pissed-off, and ornery–one of the youngest and angriest of the angst-ridden rage-rock bands burning up the charts. Onstage–where success is measured by audience participation in stage diving, crowd surfing, and slam dancing–this Sacramento outfit has a reputation for high-energy shows that can leave even the most jaded reviewer in awe. On the phone, calling from a hotel room in Chicago, Simon Says guitarist Zac Diebels is the antithesis of those images–soft-spoken, polite, earnest, and absorbed in the band’s journeyman approach to the music business.

Ya gotta love him.

“We’re never really intimidated [by the business],” the 21-year-old Diebels explains. “This isn’t a competitive band–I mean, this isn’t a race, this is music–but we are excited to show you what we’ve got.”

Now promoting their new album Shut Your Breath (Hollywood), Simon Says swing into the Phoenix Theatre in Petaluma on June 29, during the West Coast leg of the Short End of the Stick Tour, a cheap concert series that is following the massive Ozzfest around the country and playing in nightclubs and small theaters to hard-rock fans who can’t afford $75 stadium seats.

It’s the kind of grassroots, meat-and-potatoes approach that has served this band so well. A couple of years ago, shortly after getting signed to a major label and when bandmembers were barely 18, Simon Says launched an intensive and unusual high school tour that found bandmembers raging in lunchrooms, two shows a day, 12 shows a week. “It was pretty brutal,” says Diebels, “but it was well worth it because we sold a lot of records and let kids know who we are.”

Since then, the road has become a second home. Most recently, the band has built an audience through relentless national and European touring with hard-rock heavyweights Limp Bizkit, Filter, Staind, the Rollins Band, and Type O Negative.

“Touring is our bread and butter,” Diebels says. “If it weren’t for touring, I don’t think our band would gain any ground really. We’ve gotten some radio, but we don’t bank on that kind of stuff–we come from a more old-school mentality that touring is where you develop your hardcore fan base among kids who will stick with you throughout your career, not just from one song on the radio. “When we’re touring, I feel like this is what I was meant to do.”

Once in the studio, the originally punkish band developed a heavier sound, owing in part to producer Mark Needham of Cake. And the band got heard, even among the then-rising din of rage-rock acts. In 1999, the song “Ship Jumper,” from their major-label debut Jump Start, was included on the Varsity Blues soundtrack. A second song, “Slider,” made it to MTVs new artists’ rotation. And a third, “Life Jacket,” surged up the Billboard rock chart. Oddly, the music video for that last tune–a personal account of their experiences in the music biz that exemplifies the band’s dark, in-your-face themes–landed on the Disney Channel, sandwiched between pop princess Britney Spears and boy band 98 Degrees.

After the release of that album, the All Music Guide hailed Simon Says as “a very young American success story”–sort of a rage-rock Horatio Alger tale.

These days, the band has returned to its angrier roots. “We just went into the studio, threw our hand down, and said, ‘Let’s see where the chips fall,’ ” Diebels says. “It came out heavier because, in our hearts, we’re just naturally a lot heavier band.”