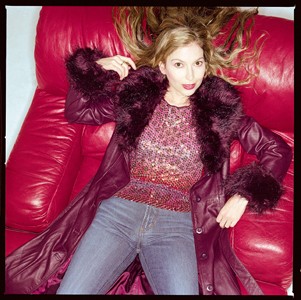 All Grown Up: Shana Morrison grew up steeped in the music industry, which has given her a unique perspective on her own career.

Shana Morrison comes into her own

Being a singer-songwriter when you are Van Morrison’s only child is a hard road to traverse–the terrain inherent with lofty public expectation and the hollow trappings of fame. Yet even with such obstacles to battle, Shana Morrison has met her challenges, distinguishing herself by virtue of a stunningly beautiful voice and original songs that reveal a woman on a path of self-discovery.

Last year, Shana released her second solo album, 7 Wishes. The record, on the Vanguard label, was produced by veteran Steve Buckingham (widely known for the pristine sound he’s created on Dolly Parton and Mary Chapin Carpenter albums) and features many blues-soaked arrangements, the silky, supple melodies intertwined in the long, smooth lines of Morrison’s vocals. Standout cuts on the record include the punchy “I Spy,” the contemplative Zen meditation “7 Wishes,” and the wistfully piercing “Song for the Broken”–with each verse perfectly framed in the delicate whisper of Matt Rollings’ B-3 organ.

Still, it’s the haunting duet Morrison performs with her father on his overlooked classic “Sometimes We Cry” that truly demonstrates the range of Shana’s singing: the song flooding the pores of her body, words half formed at the corners of her lips, slowly taking their whole shape in earthly space.

Shana’s Morrison’s life changed directions in 1993, when her father requested that she appear with him at several of his U.S. performances. The experience immediately carried Shana back to her roots. As a small girl, she had often found solace in her grandparent’s record store in Fairfax, exposed to countless blues and jazz classics heard through the hisses and pops of old vinyl.

After her parents separated, Shana spent her teenage years living in the Los Angeles area with her mother, Janet Minto (the former “Janet Planet” and subject of many of Van Morrison’s love songs), eventually enrolling at Pepperdine University to study business. Even though Shana continued to sing and write songs as a student, she kept her art secret.

Until Van Morrison summoned her to the stage.

In concert with this master musician, Shana was able to feel and see firsthand the impact that her music could have on a large audience. Suddenly, awash in the power of the moment, all the things she had kept hidden inside herself for so long were revealed.

Now recast in the image of her father–and in the image of a thousand other musicians who have preceded and influenced her–Shana Morrison is on a journey of infinite dimension. The only thing that matters now is to just keep moving steadily forward.

Can you tell me a little bit about your musical background?

Well, I sang in choirs when I was in school, in women’s chorals and in small groups. . . . I mainly just sang for fun. Back then it wasn’t an ambition or something I thought I’d be doing professionally.

But while you were in college studying business at Pepperdine, you were still writing songs privately?

That’s right. I’d perform them for family and some close friends, but that’s about it. I’ve always been a shy person, not wanting the spotlight.

Your musical beginnings actually extend back to your grandparent’s record store where you worked as a child, correct?

Yes, that’s true. My paternal grandparents had a small store, Caledonia Records, in Fairfax. On weekends when I was a child, the family would all go up there, and I would work behind the counter, handing out change at the register. I started doing that when I was about seven years old, I guess. I was exposed to all kinds of music in the store–things like Rickie Lee Jones and Steely Dan. I always wanted to get my hands on the Kiss and Led Zeppelin and AC/DC albums that all my friends at school were listening to [laughs], but my grandfather would have none of it. He said that stuff wasn’t really music, and he steered me back towards the jazz and blues LPs. And at the end of the day, I would get paid. But not in money. I would get to chose a record to take home as payment for working in the store.

On your latest album, Seven Wishes, the production work is truly stunning, the music so sharp and defined, so perfectly honed. What was it like working with a veteran producer like Steve Buckingham to achieve this particular sound?

Steve is wonderful to work with. He believes in letting the music and the artist shine through a record. I’ve actually known Steve for a long while. He’s been a strong supporter of mine, and we’ve always kept in touch. As far as making a record, he thinks more and talks less than most producers. He thinks before just throwing out an answer. He truly has respect for the artist he’s working with. And I respect that–I admire the way he carefully makes his decisions. He’s careful to ensure that you’re not there singing on his record. He just lays back and lets your music shine through, without trying to point you in any certain direction.

Your father’s contempt for the music business on the whole is widely known. How has this affected the decisions you have made in your own career?

I have been very hesitant. I grew up knowing a lot of music people and hearing a lot of stories. And it didn’t make the music business seem that attractive to me. . . . I did things my own way. I formed my own band and my own label. I managed myself, keeping control over what was happening. . . . And eventually I found Vanguard, and was able to make a record with a real producer. But it took me a long time to be convinced. It’s hard to go into this business, picturing yourself as a product, which is what you become once that record is released.

Your duet with Van Morrison on “Sometimes We Cry” is a definite highlight of the new record. Can you talk a bit about how that happened?

Well, Steve Buckingham and I decided to record that song while we were in the middle of making the album. I always liked the song–it’s one of those instant classics my father seems to always be able to write. But actually I didn’t cut the song with my father. Steve and I recorded “Sometimes We Cry” in the studio, and left two holes for solos to be over-dubbed later. My dad’s harmonica solo is over-dubbed. It came out so beautiful; I love the sound and the feel of his harmonica. I was actually kind of surprised he did it. He usually does things live in one take and is opposed to any over-dubbing. It just came about all of a sudden. I asked him to do it, and he said yes. Maybe he was in a good mood that day.

As a singer-songwriter, is there someone with whom you identify strongly, either on an emotional or creative level?

I always identify more with women, but as I’m sure you know, saying you write like someone is like saying you look like someone. We are all unique. All of the women [I’m influenced by have] qualities that I admired as a young girl, though. Rickie Lee Jones was street; Teena Marie was funky, even if she wasn’t black; Dolly Parton could tell a story that made you cry and inspired you to be a better person; Iris Dement (who I discovered in my 20s) was romance; Joni Mitchell was intellect; and Jann Arden was someone who would let all of her vulnerabilities show, who seemed strong for not cloaking her weaknesses.

Being Van Morrison’s daughter, growing up in the kind of creatively driven family that you grew up in, do you now feel a responsibility to make a mark with your work?

I think we all want to make a statement, a living, a career, rather than just have a “moment.” But we’re not all able to do it. Talent and drive alone don’t determine what happens. Intangibles play into it. All I can do is keep doing my best and try to keep it going. You can’t worry about the big picture. There’s no determining that. You just have to see what happens. There’s just no way of knowing what will happen.

Shana Morrison performs on Aug. 24 at 2pm at Healdsburg’s Music in the Square series. Check www.shanamorrison.com for more concert dates.