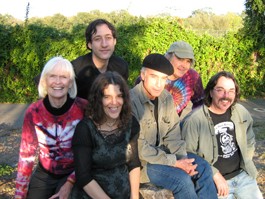 Visitors are forgiven for indulging in a quiet chuckle while driving through the large, arced sign above Monte Rio’s main intersection conferring “Vacation Wonderland” status on the once-hopping but now tiny and still hamlet of West Sonoma County. Come through town on a Thursday night, however, and Monte Rio becomes a vacation wonderland of an entirely different color—or colors—as a weekly band packs the venerable Pink Elephant bar to assist partygoers on their own internal trip.

Tribal Hippie UnderGround Zone, more commonly known as the Thugz, have packed in everyone from hippies to farmers to chefs to real estate agents to the local Sheriff at their Thursday-night engagement at the Pink Elephant, and they’ve responded with “Monte Rio Town,” an ode to the city’s colorful culture where all walks of life, by choice or necessity, come together. “It seems like there’s more of an appreciation for music out there, in certain ways,” says guitarist Andre de Channes. “It’s a very friendly crowd, and for us, it’s like having a paid rehearsal every week.”

There’s a common misconception that the Thugz are a Grateful Dead cover band, and though they do play a wide selection of the Dead’s catalogue, a cursory glance of their set lists, posted on their website, reveal covers of Neil Young, Bob Dylan, the Beatles, Leonard Cohen and Gillian Welch—in other words, the music that de Channes plays on the radio at his day job on KRSH-FM. (Some of the Thugz’ covers are Jerry Garcia standbys, too: “How Sweet It Is,” “Blue Yodel #9,” “Dancing in the Streets.”)

Founded by Mike Campbell, who moved to the area in the days when the Dead would play the Rio Nido dance hall, the Thugz have a smattering of original songs woven into their 150-song repertoire. “It’s almost like a jazz band, since there’s such a high level of musicianship and improvisation to make it our own,” says de Channes. “With the Grateful Dead stuff, we tend to stay pretty close to the arrangements. None of us sound or play like Jerry; it’s more of getting the feeling of it than mimicking what they were doing.”