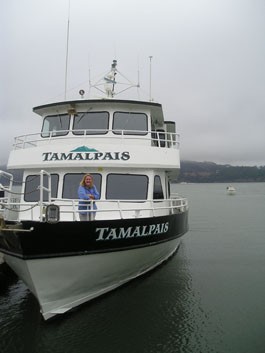 YAR: Captain Maggie McDonogh on one of the three boats in her fleet.

Hard to imagine that Tiburon was on the wrong side of the tracks,” Maggie McDonogh laughs as she deftly backs the ferryboat The Angel Island away from the dock, and the elegant restaurants and pricey shops of town recede in the distance.

The woman nicknamed “Captain Mom” welcomes her passengers and dispenses safety information before continuing. “When my great-grandfather came here with the railroad, it was a rough-and-tumble place. Even as a kid, my father kept me away from certain parts of town. Belvedere was the fancy place and where you moved if you made it. But we stayed in Tiburon.”

Maggie McDonogh runs the only family-owned ferry service on San Francisco Bay. The divorced mother of two is the fourth generation of her family to run boats out of Tiburon. Her freckles and strawberry-blonde locks belie the fact that, just in her late thirties, she is among the most experienced ferryboat captains on the bay.

Her father, Milton McDonogh, had the first Angel Island ferryboat, The Gaycin, named for his nieces Gail and Cindy and built in 1959. From the time she was an infant, Maggie was expected to learn the ways of the sea.

When she was 18 and old enough to qualify, her father said, “Time to get your captain’s license.” When she passed the grueling two-day written examination, she already had logged far more than the required 365 eight-hour days working on all the boats of the same tonnage she wanted a license to operate.

Her mother objected, saying it wasn’t the right job for a lady. It was too late. Maggie McDonogh was already at home in her father’s world.

“When my dad and uncles got together with my cousins, it looked like a table full of Vikings—big, strong, clean-living Scots,” she laughs. “I trusted my dad and was never worried when he was on a boat.”

Her family insisted on her obtaining an education.

“I considered becoming a veterinarian. When I went to Dominican College, I became an English major instead. But then I realized this is what I love. And could you have a better office?” McDonogh gestures at the bay sparkling in the sunshine as we approach Angel Island.

Each generation of McDonoghs has taken the business in its own direction. McDonogh’s great-grandfather left railroading to haul water freight and run a chowder house; her Grandpa Sam was known as “Sam the Skiff Man,” because he rented out fishing skiffs in the Depression for 25 cents a day.

“The story is that Grandpa couldn’t swim, and he once fell overboard with his pockets full of quarters,” McDonogh says. “No way was he going to lose that money in the Depression. Lucky for him, someone hauled him back in.”

Milton hauled munitions at night in blackout conditions throughout World War II (“And that was without radar”) and began the ferries. Maggie is now making her mark.

As Tiburon has become posher, so has she provided posher services. In addition to operating the ferry with the three boats the family owns, McDonogh now runs sunset cruises, inviting the public to bring a picnic dinner on weekends. She also has instituted moonlight Champagne cruises on three full-moon nights a year. She runs whale-watching trips in winter and great white shark adventures with cages off the Farallones Islands.

“It’s safe,” she assures. “The sharks don’t have can openers.”

McDonogh has also greened the business, systematically replacing the engines on her vessels with low-emission ones. This is a costly process but she is dedicated to completing it. She manages all this and her 10 employees while also caring for her two children Becky, five, and Sam, 12, and her aging parents. Her support system is a network of friends who used to work as deckhands for her father. She is raising her children on the boats just as she was brought up.

The job is not always a picnic on the bay. In 1995, the California coast was slammed by a storm of hurricane force. She had recently given birth to her son and her C-section was still healing when she woke to find The Angel Island had been torn loose from the dock when the pilings snapped off.

“That storm was just chewing up the dock, and the boat would be smashed on the rocks if we didn’t do something. The Coast Guard didn’t have a big enough boat to help us, so we were on our own. I shoved the baby into my neighbor’s arms and tore down to the dock,” McDonogh remembers.

She and her elderly father, along with some deckhands, launched a small “whaler” into the storm and she managed to tie up to the wayward ferryboat. Through the crashing waves, she managed to board the vessel and eventually brought it into Ayala Cove on the lee side of Angel Island.

“That was the time I was most scared. It was truly frightening. I could only get the port engine to work. It was the most stable boat on the bay—usually like driving a table, but both propellers were out of the water. My stitches were tearing, but it was as if your home was on fire. I had to do something.”

The storm left every boat in Tiburon damaged. The McDonoghs, relieved to have saved their biggest boat, began picking up the pieces and putting their business back together.

“You have to take life as it comes,” McDonogh says. “You can plan, but it’s not going to go the way you expected. Look at me. I never expected to be divorced, but I’ve got a chocolate lab that snores at night, so I’m OK. My dad taught me to know what I can fix and not worry about what I can’t. You have to accept that you can’t win everything.”

She turns to look at the view from the bridge of the boat. “I’ve got no complaints. The good Lord changes the artwork in my office every day. How good can life get?”

To contact the Angel Island-Tiburon Ferry, call 415.435.2131 or go to www.angelislandferry.com.