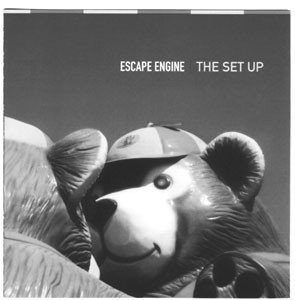 Set Up and Escape Engine

So Much More Than Emo: The Set Up and Escape Engine team up on a split EP.

Two new CDs to keep you up at night

Inventing Edward is a musical/spoken word collective of sorts from Half Moon Bay, who project old Super 8 footage during their shows and often work on a spontaneous, improvised level. Given that, plus the ponderous title of their debut CD, We’ve Met an Impasse (By Midnight We’ll Be Naked) (Substandard Records), it seems easy to assume that Inventing Edward is nothing but one big art-wank project. But anyone who fell into this trap would be missing out on a splendid album that crawls with twilight spookiness.

Inventing Edward shares a few members with the melodic hardcore band Under a Dying Sun, but the two projects couldn’t be further apart, musically. Under a Dying Sun’s songs are very up-front with their emotional turbulence, while Inventing Edward’s unsettled compositions twist ominously underneath spacy, slow-motion guitar flourishes, creepy samples, accordion drones, and Rhodes piano that shimmers like neon reflecting off pavement on a black, rainy night.

Most often the vocals are courtesy of Shaye, whose beautiful ghostly warblings make the greatest impression; they don’t dominate the songs, but they grace over them lacily.

Oddly, the spoken-word vignettes–Inventing Edward’s most immediately defining element–are the disc’s weakest link. “Etude,” which relates a drunk’s temporary sheltering of a skid-row prostitute, is a poignant read in the liner notes, but the reading of it on the album assumes a pseudo-manly lush’s swagger that’s a little too easy to see through, like an unconvincing portrayal in a high school play. The spoken word is never in the forefront of the album, though; it’s kept low in the mix, and the backwash of music supporting it is evocative enough to stand on its own.

Even though Inventing Edward never approach any huge, orchestral sound of cresting sonic waves, there is a feel to We’ve Met an Impasse that recalls how important and strange and deep it felt as a teenager to sit alone in a dark room listening to a band that can lift a listener away on an invisible suspension of disbelief. The first, untitled track brilliantly draws on a sample from the prologue from Edward Scissorhands, giving the whole album a dark, storybook feel.

Inventing Edward play an organic soundtrack to the undulations of the undermind, sometimes gentle, sometimes gritty, but always compelling.

I don’t think it’s a stretch to say the Set Up and Escape Engine are two of the most promising up-and-coming local indie bands around. Their self-titled split EP (Stereovein) came out a few months ago, and it’s the recorded debut of both. On it, the bands complement each other very well.

The lineup of Santa Rosa’s Escape Engine, who have been together for about a year and a half, includes ex-members of Sometimes Y (Ash Scheiding, vocals and guitar, and Greg Kelly, guitar) and two members from the hundreds of incarnations of Life in Braille (Jay White, bass, and Ian Anderson, drums). The band’s three tracks on this EP are immediately arresting, with churning guitars, well-planted hooks, and semifragmented arrangements.

Scheiding can fix her pipes all throaty and sexy when she wants to, but she just as often takes the scream-o-core route. When the curdling rawness to her voice crests, it can easily top that of the Distiller’s Brody Armstrong. It will be very interesting to see the progression of this band, who are planning to record a full-length for 2003 release.

In the lazy critic’s vernacular, it would be the easiest thing in the world to slap an “emo” label on the Set Up and call it quits. Marked with jagged guitar attacks and growling vocals, their songs fall into aggressive, off-kilter loud-soft-loud and stop-start patterns, as some band in between Kid Dynamo and older Sunday’s Best might sound.

As a side note, it’s good to see North Bay indie bands taking matters into their own hands–it seems we’ve been in the trough end of the DIY underground life cycle up here.

Look for the Escape Engine/Set Up EP at Back Door Disc and Tape, Red Devil Records, and the Last Record Store. Inventing Edward’s ‘We’ve Met an Impasse’ is available at www.substandard.com.