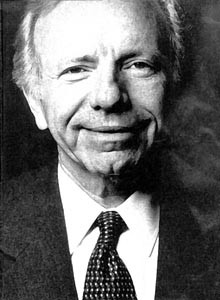 Not-so-hot ticket? Political pundits praised Al Gore for selecting Sen. Joe Lieberman, D-Conn., as a running mate, making the Veep candidate the first Jew to run on a national ticket. But some Jewish liberals are less than impressed.

Jewish dissent over selection of Lieberman

Aryeh Cohen, a professor of Talmud at the University of Judaism in Bel-Air, says that although he was pleased that a Jew was nominated for the office, he would rather it had been someone like Minnesota Sen. Paul Wellstone, noting that “there’s much more to the Jewish tradition of social justice than being able to stand on the Senate floor and point out to Bill Clinton that he’s an adulterer. I may share in common with Lieberman that he’s shomer shabbos (Sabbath observant), but not his political agenda.”

Cohen is a founding member of L.A.’s egalitarian Orthodox Shtibl Minyan, a Jewish spiritual group that considers social and economic justice as much a part of their religious tradition as prayer and ritual. “Shtibl” refers to the small prayer rooms that were once a fixture of Jewish Eastern Europe and that operated more like community centers than temples.

On Aug. 14, the Shtibl Minyan called for a Jewish demonstration outside the Democratic National Convention to protest the country’s growing divide in economic prosperity. About 30 participants marched as a contingent within the larger “Human Needs Not Corporate Greed” march, singing Hasidic songs and carrying signs that said “Bush and Gore see salvation in corporate dollars; the Talmud sees God in the face of the poor.”

Another Shtibl Minyan member, musician David Rubinstein, says that he was disappointed in Lieberman as well. “On some level, as a Jew I feel pleased that a barrier has been broken. But so much of Jewish political history in this country has been about social justice, and it’s too bad that Lieberman seems to counter that voice.” Lieberman’s record in the Senate has shown him to be a conservative-leaning Democrat who supports increased defense spending, school vouchers, welfare reform, cultural censorship, and the death penalty, in contrast to the views of many liberal Jews.

Cohen noted that he often gauges Jewish opinion according to his own mother, a retired public school teacher who is alienated by Lieberman’s favoring of school vouchers. “She’s a one-generation-away-from-poverty, Ed Koch liberal,” says Cohen. “Gore hasn’t won her vote just by nominating someone who’s Orthodox to be vice president.”

AT THE AUG. 14 MARCH, Cohen delivered a speech affirming that “the Talmud defines the first obligation of citizenship as setting up sufficient resources for the poor. Anyone living in a city beyond a certain time has to contribute to the soup kitchen and the welfare fund. Mr. Lieberman,” he asked, “how could you vote to tear them down?”

Rabbi Michael Lerner, the editor of the progressive Jewish magazine Tikkun and author of Spirit Matters: Global Wisdom and the Healing of the Soul, echoed others’ mix of pride and criticism. “On the one hand, I was celebrating American society for being able to transcend 200 years of Christian anti-Semitism.

“On the other hand, I was very unhappy that it was Lieberman who was chosen, because he is bad for Jews and bad for the country. He has further moved the Democrats from being champions of working and poor people, at least in their own eyes, to being a clone of the Republican Party.”

Lerner, who spoke at the Shadow Convention about the dangerous convergence of the left and the right, also commented on the media’s relentless infatuation with Lieberman’s Orthodoxy. He asserted that even though Lieberman adheres to religious law, he is an “assimilated Jew,” having assimilated to American values of materialism and selfishness, a trap into which many American Jews have fallen.

“America offered Jews an incredible deal when they came here,” Lerner explained. “They said we could be white, as long we turned our religion into ritual and reinforced the status quo.” Speculating on how non-Jews might react to a Lieberman vice presidency, Lerner predicted that “it will intensify negative images about who Jews are–namely, as people who support corporate power over human needs.”

OTHER JEWISH Los Angelenos were critical yet hopeful about Lieberman’s ability to move further to the left. Stephen Rohde, a board member of the Progressive Jewish Alliance and president of the ACLU of Southern California, spoke at a rally on Sunday against the death penalty and at another rally on Wednesday against the flawed criminal-justice system. He describes himself as “cautiously optimistic” about Lieberman and hopes that his clarified support of affirmative action on Tuesday was in earnest.

“Frankly, my first choices for a Jew on a national ticket would have been Barney Frank first, Paul Wellstone second, and Russ Feingold third,” Rohde says. “But Lieberman seems like someone we can have a dialogue with and reach on a range of issues.”

Other Jewish activists says that, issues aside, they were swept up in a feeling of tribalist pride that overrode ideological differences. Rita Lowenthal, the 73-year-old vice president of the Progressive Jewish Alliance and an outspoken proponent of living wages for immigrant hotel workers in Santa Monica, says that she was distraught when first informed of the Lieberman designation, but it has gotten better every day.

“I hear him mellowing, and I believe that people can change their minds. Just think, all these people will now be called ‘Hadassah Jones’ and ‘Hadassah Smith!’ Besides,” says Lowenthal, “I have a friend in Pittsburgh who knows Lieberman, and she says, ‘Trust him.’ ”