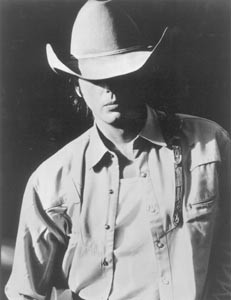 Back in the Fast Lane

Dwight Yoakam revs up his career

DWIGHT YOAKAM, whose last big hit was 1994’s “Fast As You,” is hurtling down an L.A. freeway, car phone pressed to his ear while he chats about the new projects that he hopes will jump-start his stalled recording career.

Yoakam is no stranger to the fast lane. After rising out of the San Fernando Valley honky-tonks 20 years ago, the Kentucky native helped launch the neotraditionalist movement that revived the insipid Nashville sound, scored a slew of hit country singles, and netted an armful of gold and platinum records.

These days, Yoakam is pedal to the metal. He’s back with his first album in three years–the oddly titled live solo-acoustic CD dwightyoakamacoustic.net (Reprise)–a new website, a fresh perspective, and a nationwide tour that brings him this week to the Marin Center in San Rafael. The concert will feature five new songs from the forthcoming Tomorrow’s Sounds Today album, still in the works and due out at the end of the summer.

Tooling down the road and on the tail end of a marathon publicity blitz for his concert tour, Yoakam is bright, enthusiastic, and affable while anticipating the future.

Little wonder. With the country-music charts dominated by slick pop divas like Faith Hill and cookie-cutter urban cowboys, the scene can sorely use Yoakam and his spirited honky-tonk anthems cut in the mold of Merle Haggard and Buck Owens.

Indeed, the new solo album–a retrospective of his 15-year career–has been hailed for its intimacy, with Yoakam putting his distinctive stamp on each well-worn tune. “I was performing some of those songs last year in concert,” he explains. “The audience response to it was very positive, and we thought that it would be something we could do, not so much as a retrospective, but as a special communication to a core group of fans. I had no idea that it would generate the type of interest that it has.

“You know, the first three years that I was on tour, it really felt like I was introducing this music to the audience on any given night. From the time we were out from 1994 and on, I realized that it was less like introducing myself to new audiences than it was like visiting a friend.

“So this album became a note to that friend, as opposed to a formal letter.”

The solo acoustic sets also took on a new meaning for the singer and songwriter. “It was almost as if I was experiencing the songs for the first time,” he says.

OVER THE YEARS, Yoakam has proved uncompromising. He built a reputation as a Nashville renegade, dismissed by country writer Holly Warren as a stylish Hollywood cowboy. At 43, he’s still a country-and-western sex symbol with a knack for boot-scootin’ across the stage in a pair of faded skintight Levi’s (28-inch waist, 36-inch leg) while humping his guitar and peeking seductively from beneath an oversized white Stetson that hides his balding plate.

It’s an image that catapulted the honk-tonkin’ troubadour into superstardom.

But Yoakam packs solid musical credentials. Ostracized from Nashville in the late ’70s for being “too country,” he moved to L.A. in 1978 and formed the Babylonian Cowboys. Pete Anderson–who still plays lead guitar in Yoakam’s band while handling album production duties–joined the following year. The band made its mark in rowdy honky-tonks, eventually moving into L.A. punk clubs and playing on bills with X, the Dead Kennedys, and the Butthole Surfers. But it was his association with Los Lobos and the Blasters that endeared Yoakam to the then-burgeoning roots-rock audience.

In 1986, he released his critically acclaimed debut, Guitars, Cadillacs, Etc., Etc. (Reprise). Its first single, a cover of Johnny Horton’s “Honky Tonk Man” and the title track, rocketed to No. 3 on the country-and-western charts. As Rolling Stone noted, he proved that straight-ahead country could go platinum.

As the head of the neotraditionalist country movement, Yoakam followed that success with a string of Top 10 hits. Although his 1996 album, Gone, went gold, it failed to produce any country hits. And 1997’s Under the Covers, a collection of cover tunes, found Yoakam artistically adrift, courting the swing craze and failing to connect. A Long Way Home, released the following year, featured bluegrass legend Ralph Stanley but only a couple of high points.

Meanwhile, Yoakam starred in a handful of well-received film roles, including one as the protagonist in 1996’s Southern Gothic killer flick Sling Blade. “I hope it continues as a means of expression,” he says of his film work. “As an actor, you’re only as good as the material and the skills of the filmmaker in whose hands you find yourself.”

Last year, he tested the waters as an auteur, writing, directing, and starring in South of Heaven, West of Hell, a western set for release later this year. He also plans to write another screenplay in the spring.

Yet music continues to be his first love. “It is as much, if not more so, a gratifying experience and something that’s inseparable from me as a person,” he says enthusiastically. “I began writing songs while I was touring and capturing every musical thought that I had on tape on a Walkman because I realized I didn’t have the time to set aside months alone to just write. It freed me and brought me back to the realization that I have a stream of musical dialogue with myself on an endless basis. It’s been with me since such an early age and is so ingrained as a part of my thought process that I was almost oblivious to it. But I discovered that I didn’t need a formal relationship with the song–I just needed to develop the thesis statement so I could then go back to it. And that’s what’s led me to the material on A Long Way Home and also on this album, Tomorrow’s Sounds Today.

“Coincidentally, I hadn’t thought about this before, but I’m struck by the significance of that title–I’m capturing tomorrow’s sounds today in the moment that they occur, even if they aren’t fully realized.

On that note, his cell phone beeps for call waiting, and Yoakam bids farewell before heading off down that long open highway.