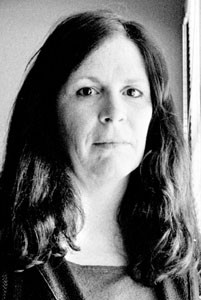 A Model For Peace: Elizabeth Stinson opposes giving the Selective Service the right to register people at the DMV.

Should the Department of Motor Vehicles promote Selective Service registration?

Before registering with the Selective Service System, 18-year-old Kevin Smith of Sebastopol thought long and hard about how it would feel to kill someone. Now a committed pacifist, Smith is carefully documenting his conscientious objector status.

Senator Jackie Speier introduced SB 1276 in the California State Legislature in February. Smith worries that if SB 1276 becomes law, it will make Selective Service System registration so easy that other young men won’t be nearly so thoughtful as he has been. The current version outlines a program modeled after Motor Voter, the National Voter Registration Act of 1993, which allowed people to register to vote while renewing or applying for a driver’s license. Similarly, SB 1276 would allow men to register with Selective Service when they apply for a driver’s license. Will they call it Motor Soldier?

Whatever they call it, Speier plans to make the idea a reality by changing the state’s driver’s license application. To sign up with Selective Service, draft-age men would simply sign their names to the front of the application. The DMV would forward their names and addresses to the SSS, who would then register them. A statement on the back of the application would alert young men that federal law requires them to register with the SSS and list the consequences of their failing to do so.

Valerie Small-Navarro, an attorney with the American Civil Liberties Union in Sacramento, says the amended bill is far better than the original. But she’s concerned that it would encourage men to register without knowing what Selective Service is or does.

The Senate Transportation Committee will consider the amended bill on April 25, and it may not pass. A key issue is that some members of the committee oppose using the driver’s license for purposes unrelated to driving.

Defending the practice, Richard Steffen, Speier’s chief of staff, says, “We’ve done that with child support. If you’re in arrears with child support, you can have your driver’s license denied.” And of course, Californians can register to vote at the DMV.

In any case, it seems odd that two liberal Democrats, Senator Speier and Assemblywoman Strom-Martin, are backing SB 1276. Strom-Martin explains that she wants to make it easy and convenient for young men to register with Selective Service and stresses that she’s not interested in tracking young men for SSS.

Speaking for Speier, Steffen says, “She’s a firm believer that everybody should be in the pool. Even disabled people, quadriplegics, have to register.” In addition, he says, “Some people who drop out of school aren’t aware of the registration requirement. [Providing this information through the DMV] would be a way to protect them from the penalties.”

Over the last three years, 16,000 draft-eligible Californians have failed to register with Selective Service. Those who don’t register before the age of 26 are permanently ineligible for federal employment and federal student aid, prohibited from practicing law, can’t take certain law enforcement jobs, and could be sentenced to five years in prison and a $250,000 fine.

The federal government knows which California drivers do and do not register with Selective Service. Since 1990, the DMV has been sending the SSS quarterly reports of drivers between the ages of 17 and 21. The SSS compares the reports to the information in its database, notes the names that aren’t there, contacts the missing young men, and urges them to register. It also forwards the names and addresses of nonregistrants to the U.S. Department of Justice.

Elizabeth Stinson, director of the Sonoma County Peace and Justice Center, challenges links between the DMV and Selective Service. She asks, “Why should the military have access to kids who apply for a driver’s license?”

The real issue, says Stinson, is how to handle conflict. “We’re opposed to violent solutions. We have to find ways to deal with conflict nonviolently, to dialog, to look at different sides of every situation. We have to model peace to our children.”