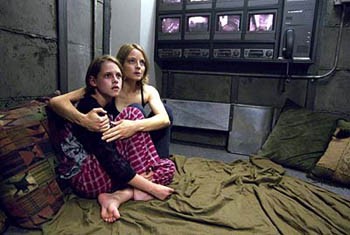 Homebuilder Lou Manfredini doesn’t like to waste materials–or words. As the straight-shooting host of Chicago’s long-running Mr. Fix-It radio show–finally enjoying national syndication after a seven-year run on WGN-AM–Manfredini, renowned construction expert and master of household tools, has earned a reputation as a knowledgeable guy who speaks his mind and gets right to the point.

For example: Having finally caught up to the hit Jodie Foster thriller Panic Room–about a newly divorced mom (Foster) trapped in her new home’s self-contained, steel-reinforced “panic room” as sledgehammering burglars try desperately to get to the safe that’s hidden there–Manfredini does not squander his time with pleasant postfilm chitchat.

“That,” he succinctly pronounces, “was the worst movie I’ve ever seen in my life!” He’s laughing as he says it, but I suspect he means every word. “Oh, I hated it,” he reasserts. “Though Jodie Foster is always a delight to watch. I’d like to meet her some day. But the movie drove me crazy. Remember when they were first breaking into the wall? That wall was drywall, not plaster. There’s no way an old building like that would have had drywall in it. It would have been plaster. I notice things like that. But, hey, at least the popcorn was good.” Myself, I liked Panic Room, and I tell him so. But then, I don’t know anything about drywall.

Manfredini is crisscrossing the country this week, promoting his new book, Mr. Fix-It Introduces You to Your Home, a room-by-room guide to how a modern house functions and what steps to take should it stop functioning. While out on the road, Manfredini, a proud father of four school-age kids, pretty much jumped at the chance to see a film that doesn’t revolve around talking animals. That Panic Room is in part a movie about home-security construction is just gravy on the meatloaf.

Speaking of food, Manfredini’s colorful critique of the film begins with what wasn’t in the panic room, supposedly built and stocked by the paranoid millionaire who’d previously owned the house and who, evidently, did not enjoy eating.

“Some food would have been good,” Manfredini states. “Think about it. They had everything else in there. They had fire blankets and shaving kits. So obviously, the mindset behind the panic room is that I could lock myself in there for X amount of days. So how about a Snickers bar? How about a bag of chips? Maybe a Pepsi. Would that be so bad? Here’s my advice for those out there who are going to be building panic rooms because of this movie: A little food goes a long way.”

“Supposedly,” I interject, “in the few weeks since this movie has come out, there has been a sharp increase in requests for these kinds of safe rooms.”

“Well, when it comes to your home and wanting it to be safe, some people go a little overboard,” Manfredini replies, “which, in my opinion, describes wanting a panic room in your house. If anything, this movie proves the adage about safety and security in the home: If someone really wants to get in, they can get in. There are ways to breach any type of security system if someone wants to badly enough.”

I resist the sudden urge to call home and make sure my wife and kids are safe; instead, I pose a question that should be right up Mr. Fix-It’s alley.

“The bad guys have bags of tools,” I remind him, “but they seem to have no clue how to use them. What advice could you give that could help these guys get into the panic room?”

“OK, here’s the thing,” he replies. “In their defense, they didn’t think anybody had occupied the house yet, so the panic room was supposed to be unlocked. But there’s Jodie and her kid, they’re in the room, the door is made of steel, and they won’t come out. So if I were their leader, I’d have said, ‘Hey, I’ll be right back.’ I’d have gone to my apartment and gotten a torch, and just cut the door open with the torch. It would have been done in about, I don’t know, 10 minutes, 15 at the most. Instead, they spend the whole movie whacking at it with a sledgehammer.”

“Maybe they should’ve read your book first,” I chime in.

“At least,” he agrees. “And here’s another thing, another little flaw in the movie. Remember the propane tank the burglars use? When they’re trying to pump gas into the panic room? It had a quick-connect fitting on the end of it, which means that they couldn’t have put that garden hose on it and gotten any gas out of it. It had to have had a male-female connection, one that pierces a ball inside, like an air hose at a gas station.”

“You’re really trying to ruin this movie for me, aren’t you?” I reply.

“Hey, don’t mess with Mr. Fix-It when it comes to truth in construction supplies,” Manfredini laughs. “I don’t even want to hear about it.”

“I’m afraid to ask, but is there anything else?” I query.

“Yeah. Plenty,” he says. “When the guy is standing there trying to break through the ceiling with that same sledgehammer, he never has a speck of dust on him. Right? I’ve knocked down more plaster ceilings than I can count, and I’m telling you, you look like Casper the Ghost when you’re done, but this guy was clean as a whistle.”

“Maybe he’s neater than you are,” I suggest.

“Not likely,” Manfredini retorts with a chuckle. “They’d have been coughing and gasping. There was only a little sprinkle of plaster on the floor. It would have been everywhere. I really can’t believe you liked this.

“And here’s another thing,” he goes on. “In this movie, Jodie Foster has just been dumped by her husband. How is that possible? Look at how good she looks. What is she, 40 years old? She looks fantastic! How could he leave her? And may I add that she’s also a fine actress and an excellent director. If she ever wants to do a remake of Little Man Tate, I’d be happy to play the bald, fat guy.”

“Yeah, but someday I will be,” Manfredini laughs. “By the time Jodie Foster casts me in a movie, I’ll definitely be bald. And by the way, I noticed you didn’t say I wasn’t fat. What’s with that?”