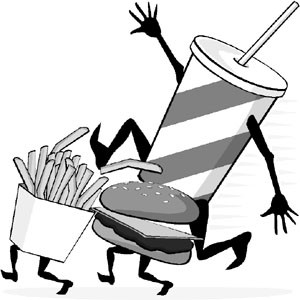 The following nationally available meal items are my own particular favorites:

McDonald’s Hamburgers. I enjoy these, perhaps two or three times a year, in moments of sheer weakness and/or desperation. A McDonald’s hamburger has its own unique, nonhamburger-like taste, making it a thing entirely unto itself. Cheese, I find, disrupts the delicate medley of flavor; it is also 10 cents more.

Anything from a Dairy Queen. DQ used to be a must-have for any two-bit, population-50 boondocks town, and their ensuing expansion has drained the quaint, everytown feel of the joint. Dennis the Menace is still on the paper cups, however, and Peanut Buster Parfaits still taste divine until you get to the last third of it and find yourself needing to puke. This area of California is tragically lacking in DQs, and while Foster’s Freeze can pinch-hit, it is no substitute.

Burger King’s Whoppers. These do taste like hamburgers, thanks to a little novelty called Flame Broiling™. I find Burger King to be of little use for anything else.

Breakfast from Nation’s Giant Hamburgers. Nation’s, a small, California-only franchise with no North Bay representation yet, splices together elements of fast food, Denny’s-style diners, and high-school cafeterias. You walk up to the counter, order from the limited but entirely serviceable menu, and wait until your number is called and your food arrives, made-to-order. As the name implies, the burgers at Nation’s are giant–but, breakfast being my favorite meal, why bother with those when pancakes and eggs are available 24 hours a day? Nation’s breakfasts are also giant: the Giant Three-Egger, the Giant Two-Egger, and the Jr. Giant (that would be a one-egger). These plates come with about half a loaf of toasted bread, a kilo of semisoggy hash browns, and a side of bacon, or its ham or sausage equivalent in volume.

Nation’s boasts two highly desirable qualities in eateries (tastiness of food nonwithstanding): Everything is cheap and the atmosphere is conducive to lingering. Though hardly the intimate town hangout, Nation’s has booths aplenty from which to gawk at the ethnically and economically diverse Nation’s clientele. Under bright fluorescent lighting, a steady parade of cell-phone-toting businessmen, teeneaged homies, Sunday churchgoers fresh from the service, and badly dressed indie rock nerds like me devour our giant portions, gloating at the immense value (high in calorie, low in cost) of our meals.

Nation’s also serves pies, which are proudly displayed in two lit glass cases that flank the counter. Nation’s pies are flavorless and without character, but the mere merit of them being pie is enough to win a fraction of my favor; Nation’s pie will do in a pie emergency. A standard piece of nation’s pie is one quarter of a pie. Even given my earthshattering love of pie, I cannot manage to put back the Giant Three-Egger and chase it with half of half a pie, a popular Sunday morning brunch habit of select Nation’s customers.

Lyon’s of California’s pie. Lyon’s, like Denny’s, is overpriced and shitty. Denny’s seems to be outperforming Lyon’s in terms of customer attendance, giving nighttime at Lyon’s a voyeuristic, postapocalyptic feel. Serving pie superior to Nation’s, Lyon’s butter-flavored, vegetable-shortening-layered crust delivers a flaky and acceptably toothsome treat. The fruit-filled pies are gummed up with an abundance of modified starch thickener that outweighs the shriveled berries or day-glo cherries, but when topped with artificially flavored vanilla ice cream, the glop is by then so thick that it makes no difference at all. I like to go to Lyon’s when I want to be out of the house and ignored–which is just what Lyon’s wait staff will do to you.

The scoop of bright yellow cornmeal pudding stuff that comes with entrées at Chevys. It’s thicker than polenta and pastier than the masa filling in tamales and way sweeter than both–almost a dessert, but not quite. Anyone who has eaten this stuff knows what I am talking about, and they know it is good.