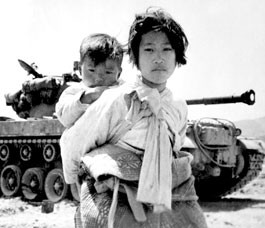 MOTHER COURAGE: ‘Every War Has Two Losers’ examines the impact of bloodshed on the psyche.

Bay Area filmmaker Haydn Reiss has had the photograph in his family for a long time. The 8-by-12 portrait captures an image of his uncle, a handsome young man in a Navy uniform, just before he shipped out to fight in WWII. He wasn’t there very long before he was killed. The portrait marks one of the last times his family ever saw him. Reiss’ grandmother became known as a Gold Star Mother, a title of honor bestowed upon women whose children died in service of their country.

Reiss’ family also keeps a photograph of his grandmother posing with a group of other Gold Star Mothers. “You could tell the photographer had said, ‘Put on a nice brave smile for the picture,'” Reiss says. “They all do it except my grandmother.”

These two photographs forced Reiss to question whether war could solve the world’s problems. In his new film, Every War Has Two Losers, he addresses this problem by delving into the pacifist works of poet William Stafford. The film shares its title with Stafford’s published collection of journal entries. “The title essentially challenges all those who think wars can be won,” Reiss says. “It’s the recognition that once you have death and destruction on either side, humanity has already lost.”

William Stafford was born in Kansas in 1914, the same year that WWI broke out in Europe. Although the war ended long before Stafford was old enough to understand its complexities, his parent’s generation flooded his adolescence with tragic stories of the suffering and death caused by government-ordained violence on foreign soil.

The onset of WWII distressed the then 25-year-old Stafford. When he was drafted, he claimed conscientious objector status and worked in civilian public service camps instead. “Armies are a result of obsolete ways,” Stafford wrote in 1955.

Every War Has Two Losers, which screens June 30 at the Smith Rafael Film Center, offers a concise and thought-provoking investigation of Stafford’s message and its applicability in daily life. The film presents Stafford’s life, work and relevance as described by poets who either knew him or admired him. (When asked why he considers poetry important, Reiss responds, “Why is food important?”) Contributors include writers Alice Walker, Maxine Hong Kingston, Michael Meade and Robert Bly. Permeated by a quiet and reflective mood, the film ends with a reading of a Stafford quote: “Here’s how to count the people ready to do right: one. One.” The screen goes black. The voice returns. “One.”

“This is a film asking you to think for yourself,” Reiss says. “Really take an inventory of the beliefs you carry around. Stafford says you should analyze what you’ve been telling yourself.”

The film is part of Reiss’ contribution to the antiwar movement. He encourages others to make small changes in their own lives that will further the message of peace. “You may not stop the war,” he says, “but the government should know that there are people that are not in lock-step.”

After World War II stole her brother’s life, Reiss’ mother, only 16, lied about her age and enlisted the Women’s Army Corps. His grandmother joined her. In Reiss’ perspective, people can go one of two ways: toward aggression and violence or toward compassion and empathy. “Aggression will never be enough. But empathy is absolutely enough.”

The Smith Rafael Film Center hosts a screening of ‘Every War Has Two Losers’ on Wednesday, June 30, at 7:15 PM. A panel discussion with Reiss and guests Alice Walker and Norman Solomon follows. 118 Fourth St., San Rafael. 415.454.1222.