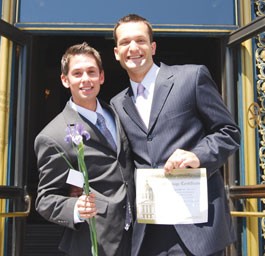 Who needs to watch 8: The Mormon Proposition? The 96-minute documentary confirms everything we already knew or suspected: that the Mormon church, operating under the veil of a “coalition,” actively pressured its members to donate millions to pass the proposition banning same-sex marriage in California. Through internal memos, addresses by church leaders and youth-training videos depicted in the film, the Mormon church is shown to have clearly violated its nonprofit status by operating as a political action committee.

Who needs to watch The Mormon Proposition? Charles Stoddard, the former Santa Rosa Mission president of the Mormon church, that’s who. Stoddard followed the decree and donated a staggering $19,500 to support Prop. 8. The footage of Mormon prophet Thomas S. Monson urging church members to donate money won’t be unfamiliar to him, but perhaps his eyes might be opened by the stories of gay Mormon youth who, under the pressure to “reform,” commit swift and grotesque suicide.

Who needs to watch The Mormon Proposition? Martin McOmber, of the Santa Rosa Stake presidency of the Mormon church, that’s who. McOmber appeared before Santa Rosa City Council in advance of the 2008 election to voice his support of Prop. 8, declaring absurdly and falsely that “Proposition 8 doesn’t take away existing rights,” when in fact that is exactly what it does. Perhaps McOmber will feel a slight tinge at the tears of relief and happiness on the faces of Tyler Barrick and Spencer Jones, above, shown married at San Francisco City Hall after six happy years together.

Who needs to watch The Mormon Proposition?

We already knew that Mormons accounted for over 71 percent of Prop. 8 contributions; that over $3 million came from Utah in the last week of the campaign; that the Mormon church has clearly violated its tax-exempt status. But for those who followed the urging from their Elders—familiar local Mormon names like Bingham, Huber, Willits, Hershey, Wheelwright—The Mormon Proposition just might inspire thought on the joy that existed for their fellow brothers and sisters. It was a joy that strengthened the institution of marriage. A joy which hurt absolutely no one else. A joy that they and their religion cruelly took away.