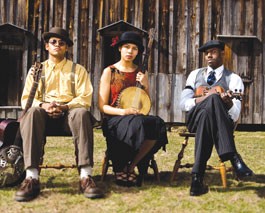 In 2005, three young musicians with a fascination for African-American folk music attended the Black Banjo Gathering in North Carolina, drawn in part by the promise of seeing fiddler Joe Thompson. Then in his mid-80s, Thompson figured among the last remaining links to the originators of the long-dormant black string band tradition. After picking up the fiddle in the 1920s, Thompson had spent the better part of a century learning and playing foot-stomping rhythms, short, scratchy fiddle licks and plucky banjo lines in a just-about-any-instrument-will-do down-home style.

Inspired by Thompson’s wealth of knowledge, the three—Dom Flemons, Rhiannon Giddens and Justin Robinson—started traveling to the fiddler’s house for weekly jam sessions, where he taught technique and songs. When the trio formed a band, it was to honor Thompson and bring his music back into the spotlight. The name they took, the Carolina Chocolate Drops, is a tip of the hat to the Tennessee Chocolate Drops, popular in the 1930s but since largely forgotten. The band swings into the Mystic on June 26.

Born of the marriage between the European violin and the banjo’s roots in African gourd instruments, string bands emerged when slaves were made to learn the folk songs and jigs slave owners wanted to hear. The result is a hybrid of styles that grew out of the dire days of slavery and laid the groundwork for country, bluegrass and blues.

Unlike the musical genres they inspired, however, string bands themselves were seldom recorded, primarily because it was assumed they had no market. “Black string music has never been a commercially viable music,” Flemons says. “There was no notion that rural people or black people would even buy records.”

The Chocolate Drops, however, are definitely selling records. Their latest release, Genuine Negro Jig, has been raking in raves and has roots music enthusiasts taking another look at the string bands of old. The album is rich with traditional soul, evident in tunes like “Cornbread and Butterbeans” and “Your Baby Ain’t Sweet Like Mine,” and illuminates the more introspective side of roots music with the instrumental tune “Snowden’s Jig.”

Committed as they are to preserving tradition, the Chocolate Drops introduce elements entirely grounded in modern-day life, most notably a cover version of Blu Cantrell’s “Hit ‘Em Up Style,” in which a woman gets back at her cheating man by charging up his Neiman Marcus card. The song’s exposure helped the group ride the current roots-revival wave that Flemons says is due, in part, to the “perception of simplicity” that folk music provides. “Like with punk or rock ‘n’ roll, you don’t have to be the most accomplished musician to start playing it,” he says, “but you can get really good at it.

“And of course,” he adds, “some people just like the sound.”