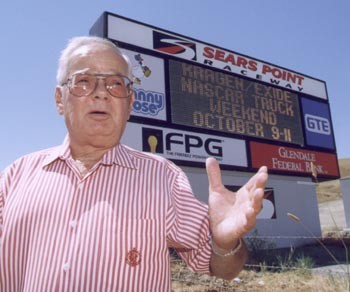 Yellow flag: Marvin Krasnansky has filed a lawsuit to curb expansion at Sears Point Raceway, saying the project is ruining the serenity of Sonoma Valley.

Sears Point: It ain’t over till it’s over

TONY AND NANCY LILLY, who live two and a half miles from Sears Point Raceway at the junction of Highways 121 and 37, planned their summer vacation this year around a major sporting event–leaving town June 22 to escape a period of intense auto-racing activity at Sears Point that drew 100,000 rabid racing fans. But the couple also is reacting to the influx of crowds to this small, usually quiet Sonoma County town in another way.

In May, the Lillys and the Yellow Flag Alliance filed a lawsuit in Superior Court against Sonoma County, the Board of Supervisors, and Sears Point Raceway, under the California Environmental Quality Act, objecting to an environmental impact report approved by the board in April that cleared the way for a major expansion of Sears Point.

Marvin Krasnansky, who has led the Yellow Flag Alliance for two years, says, “CEQA requires an attempt to reach a negotiated settlement before going to court. That’s where we are now. If we aren’t able to settle, it will go to court.”

Negotiations began on June 19, and what goes on at the meetings is confidential.

Krasnansky, who lives far away from Sears Point–on Sonoma’s east side–says he’s involved in this struggle because “Sears Point is the source of air pollution, traffic, and environmental problems that affect everyone, not just immediate neighbors. . . . You have to know the details to appreciate what a horror this expanded track is going to be,” he says.

The $30 million expansion will almost quadruple the capacity of the increasingly popular speedway, which is riding a crest of popularity fueled by celebrity drivers and high-profile NASCAR events.

According to Krasnansky, if the current EIR stands, the only way to handle the traffic will be to make Highway 121 four lanes all the way to Napa, and widen Highway 37 between Highway 121 and the Mare Island Bridge. “The board could have reduced traffic by reducing the maximum allowable crowd from 110,000 to 80,000,” he says. Instead, he adds, it has allowed Sears Point to grow exponentially.

“They’re selling this piece of the environment for $2 million year in tax revenue.”

The lawsuit charges that the EIR is inconsistent with four elements of the Sonoma County General Plan: noise, land use, circulation and transit, and scenic landscape. Specific complaints are that the noise from Sears Point alone is seriously detrimental to the lives of near neighbors–the Lillys, Roche Winery, the Roches, and others–and that the proposed project will have significant impacts on the area around Sears Point.

According to the lawsuit, there’s no substantial evidence to support the board’s finding that the project would not be detrimental to the “health, safety, peace, comfort, or general welfare” of people living and working in the neighborhood, or to the general welfare of the area.

THE LAWSUIT isn’t the first time that Krasnansky and the Yellow Flag Alliance have run up against the corporate sports giant. In 1998, the retired public-relations executive rattled investors on Wall Street by paying a news service to distribute a press release on the Internet claiming that the county could shut down Sears Point because of noise violations. Internet providers then electronically cross-referenced the press release with the company’s stock information. The speedway’s stock reportedly fell by almost $1.50 a share at that time, but it is unknown whether the press release caused the tumble.

At the time, Krasnansky was unrepentant about the high-tech tactic, but Sears Point president Steve Page, who had to field calls from shaken portfolio managers and investors, criticized the move. “It was impossible to say what effect it had on stock prices, but it did raise concern,” he told the Independent.

“What worries me was the tactic itself. This is an open public process, and there is a right way to go about it.”

The information in the release was misleading, Page added, noting that the raceway was not in danger of closing. Indeed, he has contended all along that Sonoma County has no noise ordinance. “The General Plan lays out certain standards recommended for business and various land uses,” he explained at the time.

“Our use permit was modified in 1992 and incorporates a sound study that explicitly says Sears Point Raceway occasionally achieves noise levels in excess of county standards.

“To say we’re in violation of the use permit is incorrect.”

PAGE HASN’T changed his stance. “The lawsuit is without merit,” he says. “All the issues it raises have been studied as part of the environmental review. They have been argued in front of the Sonoma County Planning Commission and the board, and both . . . have made specific recommendations and decisions. The people who have filed the suit disagree with those decisions. This is their one avenue to contest it, and that’s what they’ve chosen to do. There is probably no project of this kind that has been studied for as long and as thoroughly as this has been studied.

“We don’t view the lawsuit as a particular threat, because the issues have been studied, addressed, and debated by the public and at great length through two EIRs,” Page says. “Every relevant agency has studied it–the state Regional Water Quality Control Board, Caltrans, the Board of Supervisors, Fish and Wildlife, the Planning Department, etc. Everyone has had their input, has evaluated the potential impacts and the proposed mitigations.

The board voted 5­0 to approve the project. The lawsuit flies in the face of an awful lot of data and determinations that this process was followed thoroughly and absolutely as it should be–legally. They disagree with the board’s policy decision.”

But opponents of the approved EIR argue that the review process was flawed, and that county supervisors ignored recommendations made by their own Planning Department. Consequently, the lawsuit asks for:

* A ruling that the Sears Point project was illegal and is therefore null and void;

* A temporary restraining order to prevent the board from granting permits or executing agreements that would allow the project to go forward; and

* A requirement for the board to prepare, circulate, and consider a new and adequate EIR.

All along, the Lillys and the Yellow Flag Alliance have made a number of specific requests, including the establishment of attendance limits based on an actual count of cars instead of an estimate from the air; noise monitoring of the five biggest events and a requirement that all other events comply with the noise element of the county General Plan; and restrictions on the use of two-stroke engines, which are notoriously noisy and polluting.

“We’re the noise garbage dump for California,” says Krasnansky. “If it’s too noisy for [the raceway at] Laguna Seca, why is it OK for Sonoma County?”

Win or lose, Krasnansky says that the last two years’ worth of battles haven’t been in vain. “We succeeded in getting some limits on the size and frequency of events,” he says. “One of the conditions of the [raceway’s] use permit is that they can’t have rock and roll concerts or auto shows. This is not an entertainment facility, which is what they wanted.