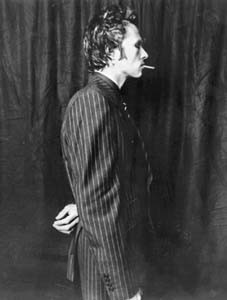 WHO COULD have imagined that , singer for the Stone Temple Pilots, would put out a decent solo record? The odds were certainly against it. After all, better men than he have failed at the task of transforming themselves into solo artists. Paul McCartney has produced nothing that compares with his work with the Beatles. Robert Plant’s deficiencies are apparent without Led Zeppelin behind him. That Weiland has succeeded where others have failed is astonishing.

Then again, Weiland may be benefiting from lowered expectations. Not only was he in a crappy, derivative band, but what talent he had–a resonant voice and a certain ability to mimic other popular idioms–was squandered in untimely drug busts, various rehabs, and several aborted tours.

Nevertheless, 12 Bar Blues (Atlantic) is a fairly good record, better even than STP’s last album, Tiny Music. Ironically, this may be because STP–first of the Nirvanabes to plague the early ’90s–lacked its own artistic voice. Back then (you know, in 1995, when dinosaurs ruled the earth), Weiland’s personal style was merely a pastiche of other sources–notably Eddie Vedder, from whom he was nearly indistinguishable. 12 Bar Blues, however, is an interesting collage of weird production tricks topped by Weiland’s sinuous and booming voice.

Solo, Weiland’s main influences seem to be Big Beat techno and the Beatles’ Revolver, which turn out to be an inspired mix. Much buzz and scratch is built into these songs, which renders them a less-hackneyed listen, and the inclusion of a theremin adds an extra spooky jolt to this moody album. Weiland’s new sound actually borders on trip-hop; he’s gradually turning into the Beth Gibbons of grunge (Gibbons being the passionate but cold voice of Portishead).

Lyrically, Weiland now comes across as far more sincere than he ever did before. Unfortunately, most of his songs are about drugs–using them, missing them, coming off them, or waiting for them to arrive–and it’s positively frightening how much more passionate he is on the topic than he was on the subject of rape in “Sex Type Thing.”

Weirdly, some of these songs are reminiscent of the ’60s band Moby Grape, though more often Weiland’s vocal style strangely echoes Alice in Chains’ Layne Staley. On the jazzy lounge number “Lady, Your Roof Brings Me Down,” Weiland sings with a depth of skill that’s surprisingly effective.

“Barbarella” is a cool song, as is “Cool Kiss,” despite a chorus lifted in part from a U2 song. Incidentally, all these songs are produced to within an inch of their lives. The production is credited to Weiland and Blair Lamb, but famed U2 sideman Daniel Lanois plays on the album and is credited with “extra recording.”

In short, despite its charmlessness of intent, 12 Bar Blues is a fascinating, textured record that’s easy to admire and easy to listen to. But the fact that Weiland has pulled a good record out of a hat, so to speak, points up an inescapable moral about rock.

And that is the endless tolerance the music industry has for addicts. Although he is apparently now clean, Weiland has a career of infidelities and failures that does not really merit the amount of rope given him–and no other business would have given it to him.

A man who lost his company millions in investments through carelessness and drugs would hardly be issued another blank check. But the music biz has a deep-seated belief that drug use enhances people’s creativity, and, alas, Weiland’s success almost bears out the theory. He’s certainly willing to take more chances than one would expect.