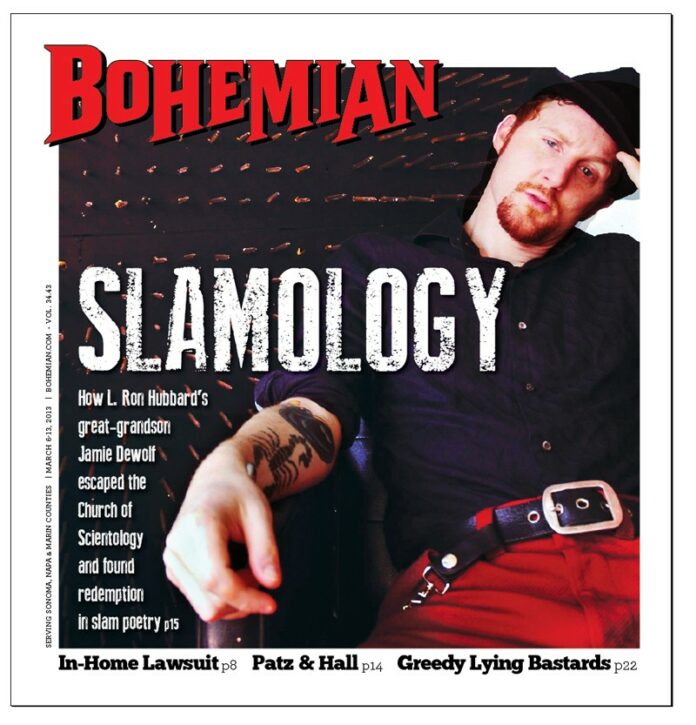 Remember mp3.com? In the pre-YouTube, early Napster world of the internet, it was how the masses legally downloaded songs and videos. And in the year 2000, before Google was a verb, a video was uploaded to mp3.com of a young red-haired kid named Jamie DeWolf performing a slam poem about his great-grandfather, Church of Scientology founder L. Ron Hubbard, in front of about 50 people.

Within a week, Scientologists had seen the video and were tracking DeWolf in his hometown.

“They were literally running me down,” says DeWolf. “I had private investigators following me, they showed up at my house. They had this whole cover story that they were promoters putting on a show with me.”

DeWolf’s mother, who had seen Scientology consume and destroy her father and grandfather, eventually clued him in to the intent of these mysterious people. “She recognized them immediately just by their general demeanor and how they were asking questions about me, and tried to identify who they were. She ended up kicking them off the porch.”

Everyone’s got their own take on religion, but for DeWolf, the subject is particularly vexing. “It’s really, really difficult growing up as a Christian when your great-grandfather was a cult leader who basically made himself a god, sort of, in our lifetime, for me to do anything without just a complete view of skepticism,” he says on the phone from his home in Oakland.

DeWolf’s conflicted upbringing fuels his writing and performance, which has made the 35-year-old a buzzed-about name in the East Bay hotbed of slam poetry. DeWolf is the featured poet at the monthly North Bay Poetry Slam (NBPS) at Sebastopol’s Hopmonk Tavern on March 10, where fellow Oakland slammer Joyce Lee was featured last month. NBPS host and creator Brianna Sage calls DeWolf “the most well-known performer” the NBPS has hosted, and “possibly the person I look up to the most as a performer.”

DeWolf grew up as a Baptist Christian, and his youthful belief was so fervent that he passed out pamphlets on the impending apocalypse. But now he checks “athiesm” on survey boxes. “I refuse to waste another day speculating on somebody else’s theology that they’re going to pre-package and hand to me,” he says.

As the creator and host of the slam poetry vaudeville show Tourettes Without Regrets, which attracts over 400 attendees each month at the Oakland Metro Operahouse, DeWolf has plenty to keep himself occupied. But lately he’s been taking on even more projects, like the full-length film Smoked, about a botched cannabis-club robbery, which he starred in, wrote, produced and directed. He’s also made several short films based on his poems, and teaches creative writing classes.

Slam poetry isn’t for everyone, but it can be a perfect creative outlet for those seeking release. “A poetry slam is a place for people to share their voices, the things they thought nobody would ever want to hear,” says Sage. Part written word, part performance art, slam poetry is controversial, emotional and often angry. Poems are more in the style of Chuck D than T. S. Eliot. This fits DeWolf like a tailored sheepskin suit, allowing him to walk around unnoticed in everyday life until he reveals his sharp teeth onstage with violent tirades, brutal honesty, intense vulnerability and Ginsu-like sarcasm.

But no matter how much everyday invisibility may be an asset to DeWolf, the giant eye of Scientology is always keeping watch.

Since being hounded for the mp3.com video—and, that same year, speaking at the first anti-Scientology gathering in the cult’s mecca of Clearwater, Fla.—DeWolf’s been more reactive than proactive in his defiance. “I met a guy who spent millions of dollars battling the church in every court. They fought him with every atom of their being and kind of eventually destroyed this guy,” says DeWolf. “I just saw the sheer totality of how many lives had been utterly wrecked by this insane, tentacled creature that my great-grandfather created, and I realized, ‘Man, there’s a lot more that I want to do with my life right now.'”

Even so, in 2011 he was named the one of the Village Voice‘s “top 25 people crippling Scientology,” and he gave a performance last year on NPR’s Snap Judgment about his family history. (DeWolf changed his last name from Kennedy to his mother’s maiden name after the comedian of the same name started getting popular.)

Such public notice makes his relatives worried. “My family’s always been incredibly leery of anything I’ve said against the cult,” he says, “because they’ve been trying to escape this cult for their entire life.”

But is he worried for himself, too? “Uh, yeah,” he laughs, nervously. “Their legacy of how they have dealt with their opposition is absolutely, staggeringly disgusting.” Bomb threats, phone taps, frame-ups and reputation destruction are just some of the less violent tools the cult has been alleged to have used. “The day that Snap Judgment video came out, I said, ‘You’ve got to let me know when this thing goes public,’ because from that point on I was literally watching for suspicious cars, I was making sure that I was always with someone when I was around, I check my damn brakes when I start my car, stuff like that.”

Amid this, DeWolf has perfected his craft, racking up awards from the National Poetry Slam and Oakland and Berkeley Grand Slam championships. He was a featured performer on HBO’s Def Poetry Jam and, in the middle of touring the world with the poetry trio Suicide Kings, made a stop long ago at Sonoma State University.

Briana Sage’s North Bay Poetry Slam in Sebastopol sees anywhere from 60 to 150 people for the open mic, featured performer and slam competition format—and the word is spreading. “It’s been growing,” says Sage. “People have just been coming up to me and asking, ‘How can I make this happen?'”

In fact, two monthly slams have started as a result of the NPBS, one at Santa Rosa’s Arlene Francis Center (International House of Poetry, hosting its next slam March 15) and one at Cotati’s Redwood Cafe (the Barnburner Slam, hosting its next slam March 12). Rather than viewing it as competition, Sage, wise beyond her 19 years, embraces the community vibe. “It’s awesome that there are more slams starting around here,” she says. “It’s just about everybody that wants to come share something, and giving them a place to share.”

The Santa Rosa Junior College student started the NBPS in 2010, when she was just 16, after winning the Sonoma County Library Slam in her first public performance. “I started writing when I was seven years old, and from seven to 15 I just performed in front of a mirror and had no idea people ever did these things in front of an audience,” says Sage. “I was so shy. I had bad stage fright—like, ridiculously bad.”

Watching Sage perform and host, one wouldn’t know she even knew the definition of fear.

As a woman, Sage is a minority in the slam poetry world. “It’s a sausage-fest,” explains Joyce Lee, the only woman to earn the title of Oakland’s Grand Slam Champion in the competition’s 15 years. She earned a rousing ovation from the crowd of about 80 at Hopmonk last month with topics ranging from her grandfather’s toughness to her mediocre vagina.

Though slam poetry may be on an upswing here in the States, it’s still far more popular in Europe. “If you go to Germany and you have an audience of 200 people, that’s a small audience,” says Lee. She’s toured Europe (and has been on NPR’s Snap Judgment five times, making her the program’s most-featured female poet), and says slam poetry in the United States lacks in terms of substance. “Most of the poetry is about nothing, because people fear judgment,” she says. “They fear accountability of changing thought.”

Lee, who has been writing since age eight, has only been slamming for the past six years. “To a lot of people, that’s not a long time,” she says. “A lot of people tell me, ‘You’re still a baby until you’ve been doing it for 10-plus years.'”

If that’s the case, then most of competitors at the North Bay Poetry Slam are still in the womb.

Unlike Tourettes Without Regrets, which is so popular that it’s forced to pick competitors through random lottery, just about everyone who signs up can get a spot in Sebastopol. The open mic preceding the slam is a good place for first-timers to cut their teeth. “To get on a stage for the first time, to share something as delicate as your heartfelt emotions written into a poem—that’s a lot for someone to be comfortable with,” says Sage. “It doesn’t matter if you forget your words, if you have to read it, if you’re not super-confident about it, the audience will support you. And that’s why I love our show.”

That’s not always the case with slam shows, she adds. Audiences at the weekly Berkeley slam can rip apart a poet who’s unprepared or just doesn’t have the lyrical chops needed to keep it interesting. Lee started working the door at the slam before trying it out herself, and pulls no punches. “When people are up there talking about nothing or saying that we’re all nothing, it’s hard for me to listen to,” she says. “I’m not saying that I get mad, but I truly get bored.” She keeps a book in her purse, she says, and she knows how to use it.

DeWolf understands what it’s like to start small and knows that it doesn’t mean things will stay that way. “It all kind of started in my little small town when I started getting kicked out of my own open mics. Slams are the only show that would not kick me out,” he says.

“I have a lot of love for people who just completely are defiant in the space of small towns and create a space for people to speak and to create an open forum. It’s like flamethrowers for moths. There’s a lot of magic that can happen with that,” says DeWolf. “It certainly changed my life.”