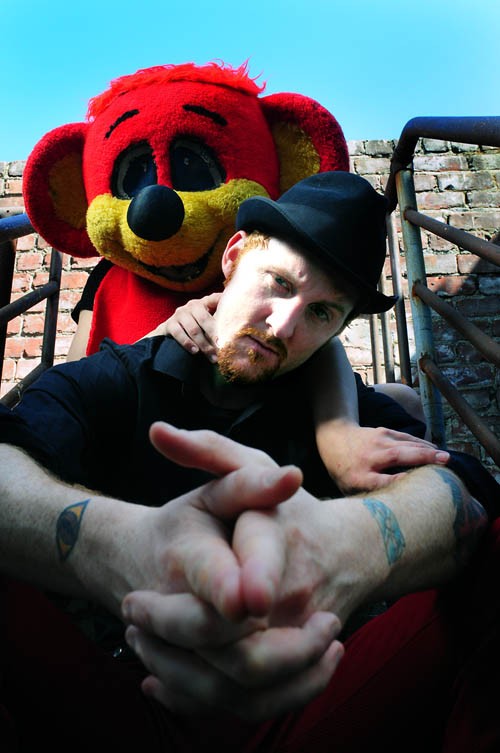 Jamie DeWolf is one of the most interesting people I’ve had the privilege to chat with. I barely got in any questions because it was so much better to listen to him speak than try to focus his energy. I rarely enjoy Q&A style articles, but even re-reading this one was enthralling. Enjoy.

Bohemian: How vocal are you now about Scientology?
Jamie DeWolf: I’ve always been willing to speak out against them. It’s just that, well, one, they’re just monstrous. It’s like going against the mafia singlehandedly. I mean, when I first spoke against them publicly was in ’99-2000. I performed a piece that I wrote that was super long, this crazy long thing that was like 15 minutes long. I was just trying to fit everything that I knew about the church and the cult into one piece and the history of my great-grandfather and my grandfather as well. I just tried to smash everything into it. Because at that point in particular not a lot of people knew about the inner workings of the cult, a lot of its notoriety and its actual internal beliefs.

A friend of mine put it online. I read it to about 50 to 75 people here in this cafe, I’d actually read it at a very early version of my show Tourettes without Regrets, and he recorded it and put it on mp3.com and immediately within a week Scientologists were after me. They were literally running me down. I had private investigators following me. They showed up at my house, they tracked down my address, they came up from San Francisco, they had this whole cover story that they were promotors putting on a show with me, that was like their running lie to anybody that they met to try and find out where I was. Then they ended up confronting my mom on the porch and she recognized them immediately just by their general demeanor and how they were asking questions about me and tried to identify who they were. She ended up kicking them off the porch.

I definitely felt hunted. Shortly thereafter, I think it might have even been the next two days, I got this anonymous phone call by this guy who only went by the alias of “Mr. Scary” and he was inviting me to come and host this anti-Scientology benefit concert in Clearwater, Florida, which is kind of their Mecca, it’s like one of their strongholds—that and Los Angeles. When I flew out there I really saw the scope of the cult, a city they had completely devoured. They had their own bus lines, they had hundreds of security cameras downtown. And to meet people whose entire lives had been completely consumed by this cult, they’d been in the cult for 20 some years and it had destroyed their family or destroyed them and they just wanted to educate the world about how dangerous and criminal they were.

I met a guy who spent millions of dollars battling the church in every court, they fought him with every atom of their being and kind of eventually destroyed this guy. I just saw the sheer totality of how many lives had been utterly wrecked by this insane tentacled creature that my great grandfather created and I realized, Man, there’s a lot more that I want to do with my life right now. I was like, This is some quicksand. I certainly would talk about it any time that anybody brought it up or asked me. I was more than up front about it and very direct, but I certainly didn’t want it to affect my performances or shows or films or anything else that I wanted to do.

It was only in the last year when Snap Judgement asked me to do a story on families, they had this theme show that was basically stories about family tales. And I said, kind of half-jokingly, that the only thing I’d be interested in writing about would be the Scientology thing and they’re like, Oh my god, you’ve got to do that. Please, please you’ve got to do that. He actually grew up in a cult himself, it was a Christian sect, nothing about Scientology, and he had done performances about that on his own show. I was like, I don’t know man, are you serious? Do you have any idea what a big thing that is? They could come after you, you could get sued. You are poking a dragon with a toothpick. That’s not just like a story, that’s a seismic shift.

At first I was actually going to just film the show, I was just going to be in it. I was organizing a camera crew to shoot it and all that. I was actually working on another piece and it wasn’t working, so I just decided, as an exercise, OK, what if I just try to write on this. Because the subject was so massive, it was like, how do I even approach this as an artist? Do I talk about what they believe? Do I talk about who L. Ron says he was versus who he is? Do I talk about all the criminal shit that they’ve engineered against people? Do I talk about them coming after me? What do I do? And then I really just focused on the family aspect of it, maybe that’s what helped crack it for me, just focusing on a relationship between a father and a son. I just really tried to keep it focused on that because when I talked to my mom about it, I was like, I’m thinking about writing this piece, what do you think? My family’s always been incredibly weary of anything I’ve said against the cult, because they’ve been trying to escape this cult for their entire life and the last thing they want to see is another one of their family members whose one degree of removal has managed to not be directly conflicted—how do I say, they felt that it had done enough damage that they didn’t want to have anything more to do with it.

My mom says that that church is nothing but toxic, its poison. She’s like, “Scientology consumed my grandfather and my father,” and that’s how she viewed it. There’s something that really stuck with me in terms of really focusing on how this cult, Scientology, ultimately consumed L. Ron and his son. Both of their lives are completely destroyed in a way, and that’s the legacy that they’re both sort of stuck with. MY grandfather, L. Ron Hubbard Jr. was obviously stuck with his same name and had to live in his shadow and fought with him and went to war with him and was eventually destroyed by him.