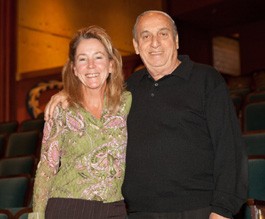 From the back of the Uptown Theatre, the scene is a sight to behold. Eight men work rapidly, bolting in floor seats. Two more unload large boxes from a pallet. Even more workers run power tools beneath the stage, prime the sound booth, vacuum the orchestra floor, look over blueprints and hand-paint the old wood decorations on the walls.

George Altamura stands in the middle of it all, a lone figure among the bustle of his dream coming true.

“I used to come to the movies and sit right here,” he reminisces, pointing out a nearby space. “‘Course, I never noticed the theater or how magnificent it was, ’cause I was with a broad, you know.” He flashes a sly grin.

Today, the 78-year-old Altamura does more than simply notice the Uptown Theatre’s beauty. With partners Bob Vogt and Tim Herman, he’s putting the final touches on bringing the theater back to its original glory through a complete restoration, a project he calls his greatest achievement.

Rather than screen movies, the Uptown Theatre will reopen May 14 as a live music venue, showcasing top acts from around the world and returning to Napa its crown jewel. What’s more, Altamura’s hired Sheila Groves-Tracey, formerly of Petaluma’s Mystic Theatre, as executive director. It’s been an expensive job—Altamura won’t say how much—but everyone agrees it’s a miracle on Third Street.

It might have been a sad fate for a building with such rich history. Opened in August 1937 with the film Ever Since Eve starring Marion Davies, the 1,400-seat theater was the place to be in Napa for decades. Altamura remembers it as “the magnet of the city.”

But the Uptown had its lean years. First it was split into two separate auditoriums. When Altamura bought the theater from Santa Rosa theater magnate Dan Tocchini in 1998, it had been further chopped into four rooms, separated by plain sheetrock walls. The ceiling mural had been painted over. The heater didn’t work anymore. The projector was unreliable. Attendance was down. It closed in 2000.

Altamura announced that he’d restore the Uptown and reopen it, and was cheered as a hero. Francis Ford Coppola’s name was thrown around. “Then all at once, Napa died,” Altamura says.

“When I saw that it wouldn’t be economical, and that I wouldn’t have a chance, I just quit working. People all called me names. They’d say, ‘He’s never gonna open up, he don’t care about us, he’s leaving that place to look like a dive.’ But they don’t understand. I’m a businessman, and things have to work their own way. Timing is what it’s all about in life.”

Timing was a lesson Altamura learned at age 16, when he drove to California with two friends from his hometown of Buffalo, N.Y. He was still in high school, fell in love with Napa and planned on staying. “But my mother said, ‘If you don’t come home, I’ll have the law bring you home. You gotta finish high school, George.'” He reluctantly returned, but directly after graduating high school, he stuck out his thumb and hitchhiked across the entire country, alone, back to Napa. The year was 1949.

“Napa was wild when I was young,” Altamura says with a gleam in his eye. “There were 50 bars. Whores all over town. There were restaurants open 24 hours a day. Never closed! Harry James, Stan Kenton, Lionel Hampton all came. It was just like you’d died and gone to heaven! Oh, it was the greatest.”

Sheila Groves-Tracey handled the booking for the Mystic Theatre in Petaluma for 15 years; before that, she held sway at New George’s in San Rafael. She once had both Jerry Garcia and Carlos Santana playing on stage with Los Lobos. She sued Screamin’ Jay Hawkins for flaking out on a tour. She’s booked everyone from Melissa Etheridge to Ben Harper to Gwar.

And still, for a veteran of concert promotion, she’s not lost her original impetus for getting involved. “I look at the performer onstage, taking in the energy that’s coming at him or her,” she says, “watching the enjoyment on that person’s face. Then looking out at the audience and seeing the faces of all these people and thinking, ‘Wow, I was a part of creating this exchange. I got to bring these people together.’ I get all choked up.”

Booking at the Uptown is handled by Elizabeth Rush, who has experience at William Morris and other agencies, and Groves-Tracey is more than impressed with the lineup so far. B. B. King, Merle Haggard, Boz Scaggs, Rickie Lee Jones, They Might Be Giants, Ani DiFranco, Lyle Lovett, Foreigner and Cyndi Lauper are among over two dozen acts already booked, and Groves-Tracey says, “I’m hoping that we’re going to be able to pursue acts like Ween and Built to Spill, so we can start working on the younger demographic.”

The theater won’t immediately show movies, a situation Altamura chalks up to equipment and competition. If the screen rises again, it’ll show classic films like Gone with the Wind or Casablanca. For the time being, all shows are 21-and-over, but as soon as the theater puts in a kitchen, Groves-Tracey says, shows will be all-ages. The seats aren’t removable, but patrons will be encouraged to stand up and dance.

Some have raised concerns that the Uptown will affect attendance at the Napa Valley Opera House, another restoration success story, and Groves-Tracey is mindful of sharing the audience for live music in town. “They are half the size,” she notes, “so the acts that they’re going to get for the most part will be ones that might not draw enough here for it to make sense. I think there’s room for everybody. I completely have respect and compassion for them.”

Three years ago, someone came forward with a photo of the old interior of the Uptown Theatre. The ceiling had long been painted over with coats of blue latex, the lighting fixtures were gone, and Altamura had gone so far as to advertise for old snapshots. As soon as the photo arrived, he ordered custom-made lighting fixtures. “We had a company make them exactly like they were,” he says. “Everything here’s original.”

The ceiling was a more tedious matter. Altamura figured on painting it gold, but he took down a wall and noticed what looked like part of a woman’s figure—”and I said, what the hell we got here?” Upon closer inspection, the ceiling showed a slightly raised outline of a Greco-Roman mural. He called a company who’d worked on the Bellagio’s ceiling in Las Vegas. “They came here, looked at it, and fell in love with it,” Altamura says. “So I scaffolded this whole building, seven feet from the ceiling. A big deal, really! And they cleaned all of it and made everything exactly like it was.”

The theater’s new capacity is now 860, mostly due to wider seats being installed. Spotlights and speakers are in place. Curtains are on their way, the stage is taking shape, and George’s granddaughter Jackie, who’s been instrumental in the details of the décor, is painting in the lobby just weeks before opening night.

“It’s a big risk,” Altamura admits. “I know that. But you can’t think that way. When I first came to Napa, I had a feeling for the town. Other people have that same feeling for this theater. Every place I go, people stop me and say, ‘George, what you’re doing with the Uptown, I’m just so happy.’ All the people that badmouthed me, now they’re saying better things.”

One thing is sure. It will be monumental when the Uptown opens its doors for business after 10 years of speculation, cynicism, hard work and, ultimately, resurrection.

“It’s gorgeous,” says Groves-Tracey, “and come May 14, when the band hits the stage, I tell you what. I’m going to crumple up, fall to my knees and just go, ‘Yeah. It finally happened.'”