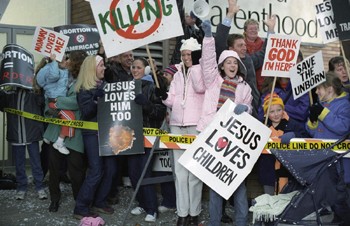 Do Unto Others: ‘Saved!’ loves children, too.

In its ongoing quest for the ultimate postfilm conversation, this expanded edition of Talking Pictures once again takes interesting people to interesting movies.

“All right then,” grins Chris Sawyer, approaching the table with a beer in each hand and sliding one of them over to me as he settles into a chair. “Let’s talk about Jesus.”

Sawyer and I have just seen Saved! Brian Dannelly’s subversively brilliant new comedy about born-again teenagers at an all-Christian high school, starring Jena Malone, Mandy Moore, Patrick Fugit (of Almost Famous), Eva Amurri and a seriously post-Home Alone Macaulay Culkin. The film delves into the world of teenage faith with humor and insight, confronting a whole laundry list of contemporary Christian issues–friendship, homosexuality, pregnancy, prejudice, loyalty, love, disappointing parents–and miraculously makes it all funny. Saved! is like Fast Times at Ridgemont High or American Pie, but with Bible studies, teen prayer meetings and a pumped-up minister/principal who likes to shout things like “Who’s down with G-O-D?”

The story takes place over the course of a year at the fictional American Eagle Christian high school, where Mary (Malone) and her best friend Hillary Faye (Moore) are the two most popular seniors, devoted young Christians who know a little less about the world than they think they do. When Mary accidentally gets pregnant while trying to convince her conflicted boyfriend, Dean, that he isn’t really gay, she finds herself an outcast.

Even Hillary, who holds prayer rallies for Dean (“We pray for all the perverts, Lord”), won’t speak to her, and with Dean having been sent to a “gay recovery” center, Mary finds herself taking refuge in the company of the school’s other outcasts, including Hillary’s cynical, disabled brother Roland (Culkin) and gleeful troublemaker Cassandra (Amurri), the school’s lone Jew. Mary’s subsequent crisis of faith is touching and believable, and though the film ends up being pro-faith, it is clearly antiprejudice.

That is not a joke.

Sawyer, a Petaluma-based writer for Wine X magazine, as well as a busy wine consultant and skilled sommelier, became a born-again Christian as a child. He attended Christian Life Church and Christian Life School in Santa Rosa (where the Luther Burbank Center for the Arts is now), attended those aforementioned prayer meetings, spoke in tongues, learned the lingo–and as a teenager, eventually grew out of it.

At about the age Sawyer was evolving into a broader view of faith (he minored in religious studies in college), I was just getting started as a teenaged born-again, an experience that lasted until a disintegration of faith in my early 20s. Both agnostic now, we share a view of ourselves as “recovered Christians.” When we heard about Saved! we made a date to check it out together, and having just seen it, everything about the film strikes a major chord with each of us.

“I’m having a lot of memories, sitting here after that movie,” Sawyer says. “The fact that this movie is set in present times doesn’t make it any less familiar to me. You could just change the clothes on the teenagers and it would be the same thing I experienced, the same exact dialogue coming out of these kids’ mouths, pretty much.

“I loved the moment where Jena Malone is really beginning to question her faith,” I say, “and she stands there in front of that cross and tests the waters by starting to use profanity, saying ‘shit,’ then ‘fuck,’ and after a long dramatic pause–and you knew she was crossing a big line here–she finally says ‘goddamn.'”

“It’s a big moment for her,” laughs Sawyer. “Most people can’t remember the first time they said ‘goddamn it.’ But for a teen Christian, it’s a big barrier to cross.”

“I remember the first time I used profanity,” I confess. “I was 20 years old and was definitely making a choice. It was crossing a big line. Losing my virginity was less of a rite of passage than saying ‘goddamn’ for the first time.”

“You were probably waiting to be struck by lightning,” Sawyer says. “I can identify with that. It’s hard when you are taught to see things in black and white, because the real world isn’t black and white. How was I affected by my Christian beliefs and by my religious schooling? I accepted that there was sin and that I was a sinner–the whole guilt-trip thing–but then I accepted that you should do to others as you’d have them to do unto you. That’s probably the major, No. 1 most important thing I learned from being a Christian, and as far as I’m concerned, that’s the most important piece of advice in the whole entire Christian scripture.”

“In the movie,” I interject, “the outcast kids are better at doing unto others than the Christians who cast them out.”

“And isn’t that interesting?” Sawyer says. “It was also fascinating to watch the pastor-principal guy and to see how closed-minded he was, while this group of kids was expanding in their knowledge and their beliefs. His mind was closed, but we get to watch some of these kids as their minds begin to open. It’s a beautiful thing.”

The movie begins with Jena Malone being baptized. Sawyer remarks that he was baptized as an eight-year-old. I was 15. “To be baptized as a kid is very interesting,” Sawyer says. “It’s kind of dangerous thing. You are being immersed into a rigid belief system right away, before you have any idea that there are any other ways of thinking or believing, and you don’t have any say in it. How is that good? You have to make your own choice on how to prepare for whatever is waiting after death, if anything, and religions should let us work it out for ourselves instead of insisting that one view be accepted by all.

“The problem is that teens don’t know what they’re doing,” I reply. “At least, they don’t know nearly as much as they think they do. And then these older Christians come along, get you saved and tell you there’s nothing else you need to know about the ways of the world. They tell you the world outside of Christianity is dark and dangerous, and only within Christianity will you find true peace.”

“Everything I thought I knew about life–everything about life that frightened me–I learned in Church,” he adds. “A lot of it was a lie. So what a shock when I actually began to experience life and learned that most of what was supposed to kill me and make me miserable and leave me all empty inside was actually not so bad at all. In fact, sin–so-called sin–has been really good to me.”

“Praise the Lord!” I say, clinking our mugs together.

“Exactly,” Sawyer laughs. “Praise the Lord! Let’s drink to that.”