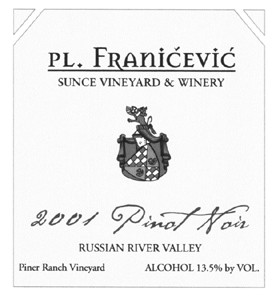 Lowdown: Frane Franicevic has fallen a little bit in love with his ’03 Mistral. He describes the mix of Chardonnay, Gewürztraminer and Sauvignon Blanc with a combination of fatherly pride and creative accomplishment, all the while smiling a little quixotically at the unlabeled green bottle he’s about to uncork. Though the wine has barely had time to miss its oak barrel incubator (it was bottled two weeks ago), Franicevic isn’t afraid of giving his friends–or a nosy taster–a sneak peak at what’s to come. As the sun streams into the tasting room from the windows behind him, he pours the wine and crosses his arms across his belly approvingly.

Vibe: Born to a Croatian winemaking family, sun, wine and grapes are part of Franicevic’s blood despite the fact that he’s actually a doctor of psychology with no formal winemaking education. He just kind of ended up in wine country while working on his dissertation. “I’m not a fan of the city. I like accessible parking,” he says with a thick accent.

Taking a break from Freud and Jung, Franicevic decided to make a few bottles of wine “for fun” with friends, winning a number of amateur awards over the next few years. In 1991 he decided he had more wine than he knew what to do with and created his first winery, One World. Suncé, which means “sun” in Croatian, was founded in 1998 on a former horse farm.

A less than formal affair, Suncé’s tasting room is fashioned from a detached studio in back, the Pinot Noir vineyards from former horse pastures and the barrel rooms from the barn. A tiny pink bicycle is parked behind the family’s home, which is just a few feet away. New doors, carved in Romania, lean against the siding, waiting to be hung.

Despite the rustic charm, the wines hold up to more than just family appeal. Suncé’s wines are consistent winners in major regional competitions–most recently the San Francisco Chronicle‘s winetasting competition held in March–with many sold-out before they ever reach the commercial distribution.

Mouth value: At first blush, reds seem to be the heavy hitters. Suncé’s Pinot Noirs are consistently outstanding, each unique. The 2002 Russian River Rodella Vineyard ($34) comes from 50-year-old vines and reflects a softer, more European style. The 2002 Piner Ranch Pinot Noir ($34) is a more fruit-forward Californian-style Pinot, with more intense, grapey flavors. Franicevic’s Zinfandels are also remarkable, with the 2001 Clear Lake Old Vines Zin ($24) winning a gold award from the Chronicle. We liked the dry fruit and floral notes of the 2002 Amador Old Vine Zin (Winzerhof Vineyard) for just $20. Franicevic’s current batch of whites are young, but promising. Tasted side by side, the ’02 Fumé Blanc is oaky and toasty, while the ’03 Sauvignon Blanc (just bottled) hints at the bright floral to develop over the next several months.

Five-second snob: Know the difference between Fumé Blanc and Sauvignon Blanc? Both use Sauvignon Blanc grapes, but a fumé is traditionally aged in oak barrels, imparting an earthier, oakier flavor. The Sauvignon Blancs are often aged in steel tanks to give a crisper, lighter taste.