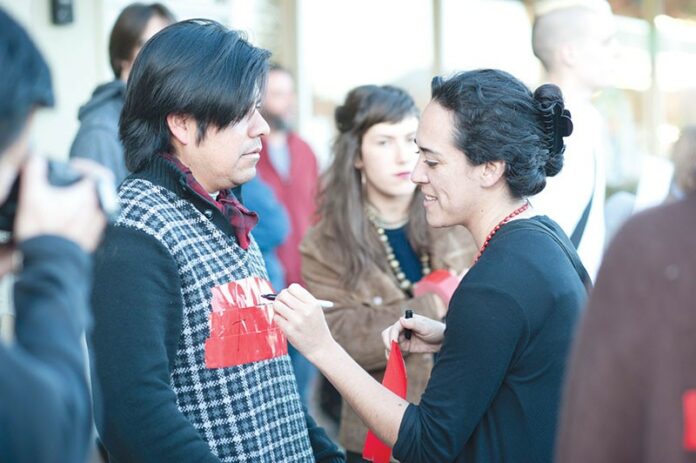 On the eve of Noam Chomsky’s call to Obama to pardon the undocumented, Maria de los Angeles (pictured, at right) was one of about 30 artist-activists who participated in a march and protest on Dec. 22 in Santa Rosa. The event was a so-called suitcase action, in which activists demanded the city declare itself a sanctuary for the undocumented in light of recent suggestions from the incoming administration that the country is headed for a brutal round of deportations and the end of the Obama-era Deferred Action for Childhood Arrival (DACA) program.

De los Angeles is a DACA Dreamer who now finds herself in the crosshairs of anti-immigration zealotry. She helped organize the event last Thursday and describes it as a success, as she highlights that it “was not necessarily a protest,” but more of a gathering for performance artist-activists to push the city to declare itself a sanctuary city. The designation has no legal or official import and simply indicates that a city or town won’t participate or sanction federal raids against undocumented immigrants within its borders.

Before heading back to Brooklyn, where de los Angeles works as a university professor, she says city leaders here pledged to have a conversation, at least, about sanctuary status in Santa Rosa, and she notes that newcomer city councilman Jack Tibbetts attended the rally-performance. Outgoing mayor John Sawyer is still on the council (he was replaced by Chris Coursey by a vote of the council); right after the election, Sawyer issued a statement of support for undocumented immigrants, but, as the Press Democrat noted, he stopped short of endorsing the call for Santa Rosa to join some 40 other cities around the country that have made the pledge to protect their most vulnerable citizens. Now there’s a petition urging the city to join the movement.

She says the only way for her to become a U.S. citizen in short order is to get married, and that’s not a priority for her. Deportation would mean the loss of her university job, not to mention the loss of a community that has sustained her and other Dreamers.