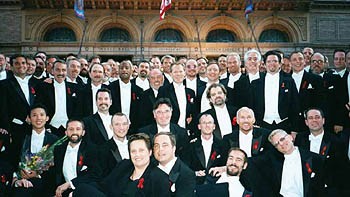 Tomatoes and basil, Sauternes and foie gras, Fred Astaire and Ginger Rogers . . . and now, finally, the San Francisco Gay Men’s Chorus and Queen. Yes, that Queen, the anthematic, operatic ’70s rock monsters whose impact extends far beyond joyrides in Wayne’s World and triumphant football teams singing “We Are the Champions.” With the April 7 Tribute to Queen and Freddie Mercury preview concert at the Jackson Theater in Santa Rosa, the music of Queen will come alive through . . . queens.

“There aren’t that many bands you can sustain for a whole concert. Queen lends itself to that,” says Dr. Kathleen McGuire, artistic director of the Gay Men’s Chorus, who also arranged and conducts the tribute.

Queen combined arena rock and glam to its ultimate ends, thanks in no small part to its flamboyant frontman, Freddie Mercury, who said he wanted them to be “the Cecil B. DeMille of rock.” Mercury died in 1991, the first major rock-star casualty of AIDS.

“Someone said we should do a Village People show, but you need the Village People to do that. Queen translates well to a men’s chorus,” says McGuire. The most obvious example is “Bohemian Rhapsody,” which Mercury did 180 vocal overdubs for in the studio. With the 200-strong San Francisco Gay Men’s Chorus’ performance, this effect will be produced in concert for the first time ever.

McGuire, who is now in her second season with the chorus, initially tossed around the Queen tribute idea when she became artistic director. “What we are trying to do is reproduce what Freddie Mercury wanted to do,” she says. “I didn’t realize just how effective it was until we sang it the first time. It’s not easy–it’s not something you can whip up. You need to have an exceptionally talented group of voices, and we do.”

In keeping with the spirit of the music, the chorus is bringing along a pianist and a drummer for Sunday’s preview performance, plus some multimedia surprises, such as outlandish Mercuryesque costumes and a performance of the Flash Gordon theme song featuring special effects. Eventually, the “Flash’s Theme” segment will include a short B-grade movie that one of the chorus members is producing. And McGuire promises audience participation, adding, “I know a lot of people sing along to Queen on the radio.”

The Queen tribute is the most rock-oriented show for the chorus yet. “We did ABBA a few years ago,” says McGuire, “though that is more pop.” And while Queen’s music is more classically rooted than, say, Van Halen’s, there were still challenges in adapting it to a choral format. “Freddie Mercury sang a lot of high falsetto, and I had to add a fifth line for countertenor, which we don’t usually do. And so much is built around Freddie, who had a tremendous voice.” McGuire says.

Even though Freddie Mercury became a gay icon, some members of the chorus were not familiar with Queen. “They all love it now,” says McGuire. “Some went out and bought all the Queen CDs.” McGuire first became aware of Queen when she was 10 and turned on the TV to be greeted by the video for “Bohemian Rhapsody.” “My jaw hit the floor. I said, ‘What is this?’ Opera is one of my great passions, and I think Queen had a lot to do with that.

“Queen stands the test of time. When bands were sticking to a three-minute formula, ‘Bohemian Rhapsody’ was five and a half minutes long, and they made a video to sell the song. No top-10 bands did that in 1975. Freddie was a real innovator–his influences were vast.”

The legacy of Freddie Mercury for the gay community makes the tribute a poignant one for the chorus. “The evolution that Queen went through is what some of the members of the chorus have gone through,” McGuire says. Mercury suffered through several painful years with AIDS, though he bravely continued to dedicate himself to his music–which the San Francisco Gay Men’s Chorus, who have lost over 200 members to AIDS in their 24-season history, can relate to all too well. It’s no small coincidence that April 7, the day of the preview concert, is World Health Day. Funds raised will benefit Face to Face/Sonoma County Aids Network.

The Gay Men’s Chorus plans to record a CD of the tribute, tentatively due in June, depending on when they get sponsorship. Following the preview concert, there will be two performances in San Francisco, both with full rock bands and expanded visual extras. Despite the flashiness, McGuire reassures that it’s not just a big glam show. “The music itself is what makes this.”