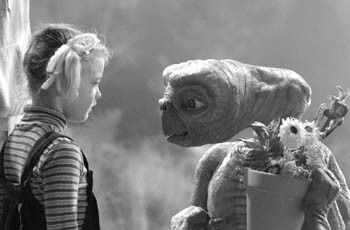 Curator responds to the revisionist tinkerings of Steven Spielberg

The focus of McGowan’s infrequent yet sizable ire is Steven Spielberg’s E.T.: The Extra-Terrestrial. The classic 1982 fantasy starring Henry Thomas and Drew Barrymore–the story of a little lost alien and his unlikely friendship with three suburban siblings–has, in celebration of its 20th anniversary, been messed with. As widely reported, Spielberg has gone and tinkered with his sentimental blockbuster, enhancing the special effects with new digital technologies, adding formerly deleted scenes, and–here’s where McGowan gets especially miffed–altering several key moments to make the film more palatable to what Spielberg believes are the newly evolved attitudes of modern moviegoing audiences.

Remember the famous scene where the boys on bikes fly over the heads of pistol-waving policemen? The guns are now gone, digitally replaced with walkie-talkies. Then there’s the Halloween scene in which the mom tells her son he can’t go trick-or-treating dressed as a terrorist. In the new post-9-11 version, mom now objects to his going out as “a hippie.”

“It’s confusing and unnecessary, and these changes rankle me,” says McGowan, 55, artist and curator of the legendary (though currently closed) Unknown Museum, a Marin County landmark showcasing McGowan’s staggering collection of abandoned pop-culture toys and artifacts from the 1950s to the early ’80s. E.T. stands as one of McGowan’s favorite cinematic icons.

But that’s only part of the reason he’s so annoyed by the new E.T.

“Movies are like mirrors of the times they were made in,” argues McGowan. “If you start changing things 20 years later, you risk changing the way we think of the past, you do a disservice to history. Taking the guns away is so … I mean, gee whiz, every Spielberg movie but Close Encounters has guns in it.”

The core issue, of course, is that in E.T. the guns are in the same shot with kids. Spielberg has publicly stated that in a time when we are still reeling from events like Columbine and Littleton, movies that show kids and guns together make him uncomfortable.

“So he should stop making those kinds of movies,” says McGowan. “I have no problem with that. But E.T. wasn’t made in the age of Columbine. So for history’s sake, we should just leave well enough alone.”

Since movie directors themselves no longer seem to see their films as historical documents, then why not take a high-tech paintbrush to everything that either offends us or has become too dated and out-of-touch. After all, we have the technology, so why waste it? To that end, a select sampling of movie fans were asked to fantasize about what substitutions, additions, or deletions they’d like to see made in classic films. Here are some of the results.

“To begin with, changes could be made in the film version of Woodstock,” says historian David Allyn, author of Make Love, Not War–The Sexual Revolution: An Unfettered History. “All those 20-year-olds should be given digital nipple and bellybutton piercings to make them look more ‘today.’ And Casablanca could be recut to get rid of all those scenes of people smoking. We wouldn’t want kids getting the wrong message, would we?”

“Why not wash the blackface from the faces of Mickey Rooney and Judy Garland in Babes in Arms,” suggests San Jose cineaste Leslie Thorne, in reference to the 1939 film in which the stars get funky with an old-fashioned minstrel show. “While you’re at it, someone should digitally alter Terminator 2 so that Arnold puts a legally required safety helmet on the underage Edward Furlong during the dangerous motorcycle sequence.”

The most daring suggestion of all comes from Josh Kornbluth, the actor, writer, and director of the indie cult-comedy Haiku Tunnel. Says Kornbluth, “Could someone please take all of Adam Sandler’s movies and digitally replace him with Ben Stiller?”

Of course someone could. And probably will. It’s only a matter of time.