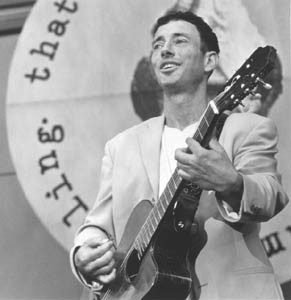 Caught in the Act

Is it too early to celebrate? For the first time in three years, the North Bay has an honest-to-God club scene–featuring a wide range of local and touring acts–that looks like it might sustain itself at least through the summer.

Until recently, things were pretty bleak. Santa Rosa–where the city council and police department had managed to quash the nightlife–was a virtual ghost town. The closure last year of the venerable Inn of the Beginning in Cotati seemed like an ill omen, and the 1996 demise of Magnolia’s, the longtime Railroad Square rock club, had left Sonoma County music fans scrambling; only Petaluma’s Mystic Theatre and the Powerhouse Brewing Co. in Sebastopol held down the fort, so to speak. Pretty slim pickin’s for a county that boasts a half million residents.

What a difference a year makes. The opening last year of the Last Day Saloon in Santa Rosa marked the return of top classic rock, folk, and roots bands to the otherwise sleepy county seat. And, more recently, crowds are spilling out of Jessie Jean’s Coffee Beans on Mendocino Avenue near Santa Rosa Junior College, where alt-rock and indie bands from Los Angeles, Sacramento, San Francisco, and Oakland perform on weekend nights.

In Petaluma, the Phoenix Theatre–the city’s celebrated punk emporium–has forestalled foreclosure and is staying one step ahead of the law.

In Healdsburg, the recently opened Healdsburg Bar and Grill is now hosting top blues and R&B acts, as does the outstanding Bear Republic Brewing Co. And Felix and Louie’s restaurant recently has started serving up an impressive menu of jazz by notable Bay Area musicians.

In Marin County, things are jumping. The Fourth Street Tavern in San Rafael, Sweetwater in Mill Valley, and Rancho Nicasio in West Marin are continuing to offer everything from alt-rock to top touring folk artists to country swing. And 19 Broadway nightclub in Fairfax now regularly features some of the best world music, reggae, jazz, and R&B acts around. Look for a five-night stint by legendary reedman Sam Butera, widely regarded as one of the innovators of R&B sax and the longtime band leader for Las Vegas lounge king Louie Prima. Butera appears for five nights and 10 shows from April 17-21.

Meanwhile, New George’s in San Rafael–which in recent years had scaled back to Mexican banda performers–once again is booking top ’80s rock, pop, and ska acts, in a move that harks back to the days when such bands as Chris Isaak and Silvertone, the Neville Brothers, Robert Cray, and Los Lobos graced the stage there. Among the acts scheduled this spring are quirky singer-songwriter Jonathan Richman of Something About Mary fame (April 12), San Francisco drum-and-organ duo Mates of State (April 18), the English Beat with the General Public’s Dave Wakeling (April 27), Gene Loves Jezebel (May 4), the Specials (May 18), and Missing Persons (May 28).

Can’t wait for Tom Waits’ two new albums due next month? Sit tight. You can whet your appetite with the newly released Big Bad Love (Nonesuch) soundtrack, to which the suddenly prolific Waits contributes two new tracks. Alice and Blood Money are due for release May 7.